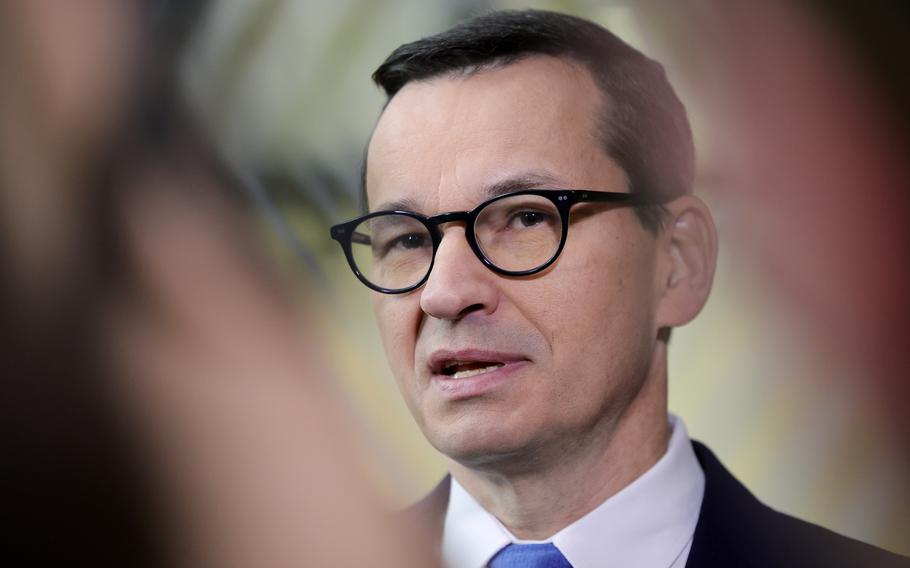 Poland’s Prime Minister Mateusz Morawiecki speaks with the media as he arrives for an EU summit in Brussels on Oct. 21, 2022. Poland’s President Andrzej Duda was meeting Monday, Jan. 9, 2023, with the prime minister and some of his ministers to discuss security issues amid the war in neighboring Ukraine, including Kyiv’s request for delivery of Western-made heavy battle tanks. (Olivier Matthys/AP)

WARSAW, Poland — Poland's prime minister said Thursday that the country was reviewing the supervision of its gas and oil installations and other strategic locations after a weekend incident in which three foreign divers had to be rescued from near a key oil port where they had no authorization to be.

Premier Mateusz Morawiecki also said he had requested the secret security services to produce a detailed report on the incident.

Police in northern Poland are facing questions over why they released the three divers rescued from near the Gdansk oil port without conducting a detailed interrogation of them.

Security experts say the presence of the divers in the sensitive area of the Gulf of Gdansk last weekend raised concerns, given the high tensions with Russia over its energy deliveries. The divers had Spanish identity documents.

According to Polish media, the divers were rescued early Sunday after they sent a distress message when their unregistered small boat malfunctioned in stormy weather. They were equipped with professional diving gear and said they were looking for amber, but none was found in the boat. They had no permission to dive in the gulf.

Despite a high level of security introduced across Poland because of the country's support for neighboring Ukraine amid Russia's invasion, police released the men. That has raised questions, more so because the phone numbers they gave turned out to be inactive.

Morawiecki, asked about the matter, said he had commissioned Poland's secret services to take a close look into it.

"Of course, it may be that they are dangerous people, but it may turn out that these are not dangerous people and what they have declared is true," Morawiecki told reporters.

He stressed that Poland had increased its level of supervision of strategic infrastructure following Russia's invasion of Ukraine on Feb. 24, but is also reviewing security protocols again.

"It is obvious that amid the war in Ukraine, when the risk of sabotage by Russia increased immeasurably, it was necessary to strengthen the supervision of critical infrastructure. We are also reviewing this supervision," Morawiecki said.

In raising their concerns, experts are pointing to the underwater explosions last summer that damaged the Nord Stream pipelines that run on the Baltic Sea bed and were to carry Russian gas to Germany. Swedish and Danish authorities have said the leaks were sabotage.

Some media in Poland were suggesting the three divers might have been involved in a smuggling ring and could have been searching for contraband.