Greek PM Mitsotakis: 'We will not go to war with Turkey' 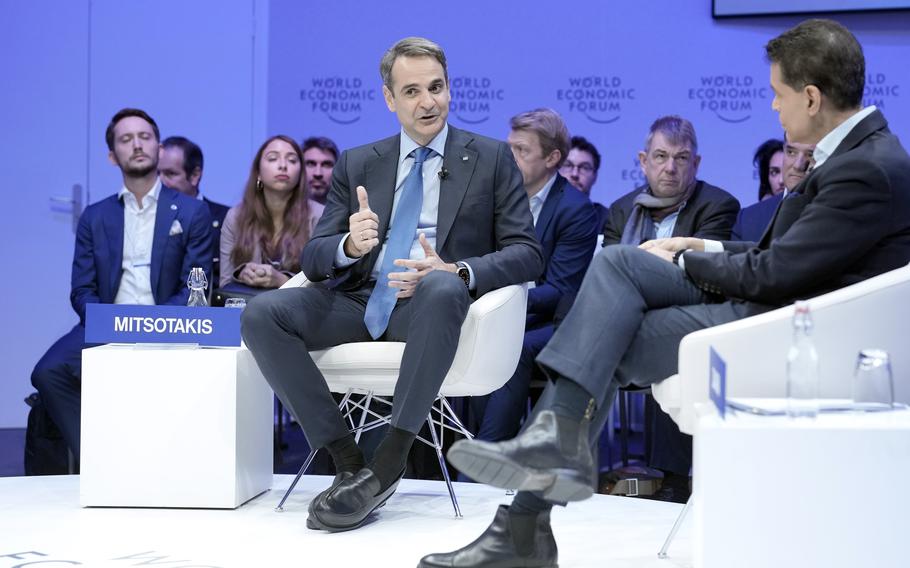 ATHENS, Greece — Greek Prime Minister Kyriakos Mitsotakis said Thursday he still believes it is possible to resolve his country's differences with Turkey by speaking with Turkey's president, and stressed that the two neighbors will not go to war.

Relations between the two NATO allies and historic regional rivals have been particularly strained for nearly three years, with alarming rhetoric from Turkish officials. Turkish President Recep Tayyip Erdogan has repeatedly said Turkish troops could descend on Greece "suddenly one night," and even threatened to hit Athens with ballistic missiles.

"We will not go to war with Turkey," Mitsotakis said during a session at the World Economic Forum in Davos, Switzerland, Thursday. "We should be able to sit down with Turkey as reasonable adults and resolve our main difference, which is the delimitation of maritime zones in the Aegean and the eastern Mediterranean."

Mitsotakis noted that although it was a "complicated issue because of the geography of the Aegean," Greece had managed to resolve similar disagreements with Italy and Egypt and was contemplating taking a similar dispute with Albania to the International Court of Justice in The Hague.

"As long as you agree on the playbook, and the playbook is, you resolve your problems according to international law .... you don't unnecessarily provoke your neighbors, you keep channels of communication open," Mitsotakis said. "And I think also it's never helpful to ... weaponize foreign policy for domestic reasons. It's usually not a good approach because you end up poisoning your public opinion."

Both he and Erdogan face elections in the first half of this year.

"I don't know which government will emerge out of Turkey, but certainly I think there are ways of lowering the tension, working on issues of common interest, agreeing to disagree," the Greek prime minister said. "But even if we agree to disagree, we can do so in a civilized manner."

He said that while there had been "very, very difficult moments" with the Turkish president, "I do not consider it impossible to find a solution with President Erdogan."

Long at odds over a series of issues, including territorial and energy exploration rights in the Aegean Sea and eastern Mediterranean, Greece and Turkey have come to the brink of war three times in the last half century. Recent tension has centered on energy exploration rights in the eastern Mediterranean, and on the presence of Greek troops on eastern Aegean islands near the Turkish coast.

He noted that Turkey invaded Cyprus in 1974 and the island has remained ethnically split ever since, with only Turkey recognizing a breakaway Turkish Cypriot state in the northern third of the island. The Turkish invasion followed a coup aimed at the island's union with Greece.