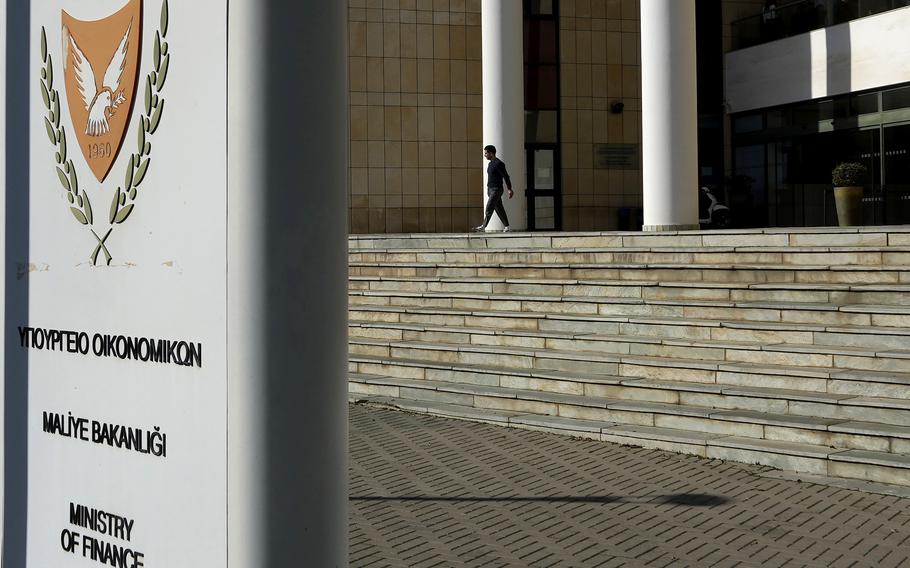 A man walks outside of the ministry of Finance in capital Nicosia, Cyprus, Thursday, Jan. 19, 2023. Cyprus’ finance minister Constantinos Petrides said the small island nation unfairly continues to be portrayed as a safe haven for Russian oligarchs trying to evade European Union-imposed sanctions, insisting that the country has forsaken it’s “past sins” and has moved to freeze hundreds of millions worth of Russian-linked cash and other assets in accordance with the sanctions regime. (Petros Karadjias/AP)

NICOSIA, Cyprus — Cyprus has frozen about 1.5 billion euros ($1.6 billion) in Russian-linked deposits and assets in accordance with European Union sanctions over the war in Ukraine, the island nation's finance minister said Thursday.

Constantinos Petrides also told a press conference that Russian deposits in Cypriot banks have fallen from a stunning 40% of the total before the 2013 financial crisis — when big depositors were forced to take a cut on their money under a so-called "bail-in" deal — to 3.8%.

He was responding to a report this week in the CBS 60 Minutes show, which suggested Cyprus still hosts a maze of shell companies concealing assets of sanctioned Russians, and that such assets Cyprus has frozen are a fraction of the total.

"We don't live in an unsupervised environment, especially a European Union member country with such a sinful past," Petrides said. He was referring to lax banking and financial services supervision that earned Cyprus much criticism as a money-laundering heaven.

Petrides added that much had been "corrected" following three years of strict supervision by the International Monetary Fund, and European creditors as part of a multibillion euro bailout program following the 2013 crisis.

The minister said Russian deposits in Cypriot banks are less than 1 billion euros ($1.08 billion), about a fifth of what he said the TV report claimed was deposited by Russians last year.

He also said tougher vetting for money laundering in recent years has made it harder to open a bank account in Cyprus and resulted in the closure of 80,000 bank accounts, while thousands more have been prevented from being opened.

Petrides said the names of sanctioned individuals cannot be disclosed.