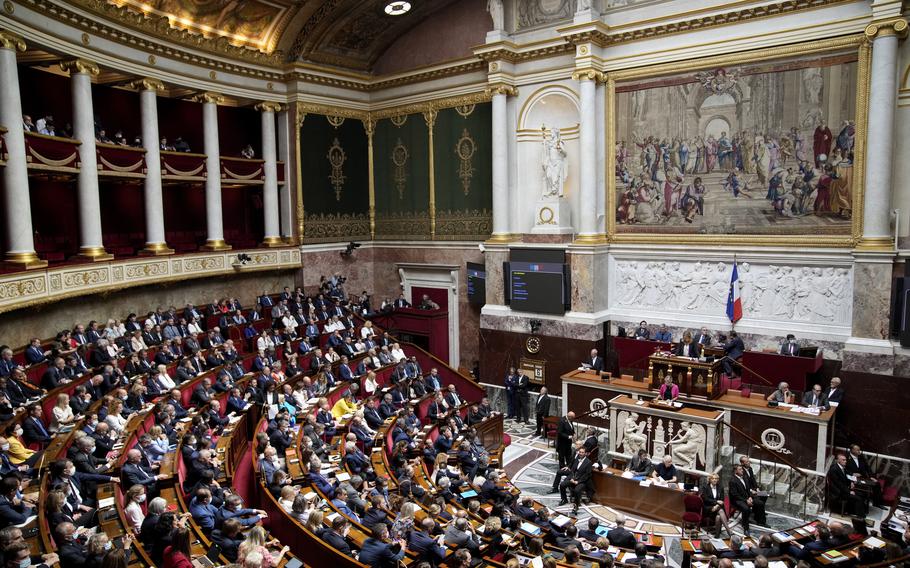 French Prime Minister Elisabeth Borne delivers a speech in the National Assembly in Paris, France, July 6, 2022. Lawmakers in France’s lower house of parliament began debating a proposal Thursday, Nov. 24, 2022, to enshrine abortion rights in the country’s constitution, the first step in a lengthy and uncertain legislative battle prompted by the rollback of abortion rights in the United States. (Christophe Ena/AP)

The measure was approved with 337 lawmakers voting for and 32 against in the 557-member National Assembly.

To be added into the constitution, any measure must be first approved by majorities in the National Assembly and the upper house, the Senate, and then in a nationwide referendum.

Authors of the proposal, from a left-wing coalition, argued the measure was aimed at "protecting and guaranteeing the fundamental right to voluntary termination of pregnancy."

Abortion in France was decriminalized under a key 1975 law, but there is nothing in the constitution that would guarantee abortion rights.

Mathilde Panot, head of hard-left France Unbowed group at the National Assembly and co-signatory of the proposal, said "our intent is clear: we want not to leave any chance to people opposed to the right to abortion."

He referred to the U.S. Supreme Court's decision in June, which eliminated the federal constitutional right to abortion and left the decision to the states.

"The right to abortion we thought was acquired for 50 years (in the U.S.) was in reality not at all acquired," he said.

A recent poll showed that over 80% of the French population supports the right to abortion. The results were consistent with previous surveys. The same poll also showed that a solid majority of people are in favor of enshrining it in the constitution.

French President Emmanuel Macron's centrist alliance, Renaissance, on Thursday decided to withdraw a similar proposal that was meant to be debated Monday also in the National Assembly. Centrist and leftist lawmakers agreed instead on supporting a single bill saying that "the law guarantees the effectiveness and equal access to the right to voluntary termination of pregnancy."

Thursday's vote is only the first step of a lengthy process without a guaranteed result.

The Senate, where the conservative party, The Republicans, has a majority, rejected a similar bill in September. The Republicans senators argued the measure is not needed since the right to abortion is not under threat in France.

Dupond-Moretti said he was "hopeful" that some senators could change their mind and form a majority in favor.

He and other proponents of constitutional change argue that French lawmakers should not take any chances on fundamental rights, since it is easier to change the law than the constitution.

The right to abortion enjoys broad support across the French political spectrum, including from Marine Le Pen's far-right National Rally. Yet Le Pen in recent days said she is opposed to the leftist proposal because she thinks it could potentially lead to extending or abolishing the time limit at which a pregnancy can be terminated.

Following the U.S. Supreme Court decision in June, Macron had tweeted that "abortion is a fundamental right for all women. It must be protected."