The Rheinland-Pfalz Finance Court, in an opinion published Nov. 23, 2022, said that U.S. military pay is not subject to income tax while service members and other personnel are stationed in Germany. Local tax offices have pursued many Americans for their military income in recent years under what the court ruled was an incorrect interpretation of a NATO treaty. (Andreas Focke/German Federal Fiscal Court)

STUTTGART, Germany — A German state court said Wednesday that efforts by local finance offices to tax U.S. military pay violate the NATO troop treaty, marking a groundbreaking development in a dispute that has caused financial devastation for scores of Americans over the years.

The Rheinland-Pfalz Finance Court, in an opinion published Wednesday, said it “ruled for the first time” that U.S. military income while stationed in Germany is not subject to domestic income taxation.

The main argument used by finance offices to tax military members — that personnel must be able to prove they intend to someday return to America — is irrelevant, the court ruled.

The court issued its decision on a case involving a U.S. soldier who is married to a German woman.

The finance office in the Landstuhl-Kusel area, home to Ramstein Air Base and tens of thousands of Americans, had sought to tax the family’s military income — which is already taxed by the U.S. — because of the soldier’s marital ties.

They appealed the tax office’s decision to the Rheinland-Pfalz court, which sided with the military family. The ruling did not name the plaintiffs. 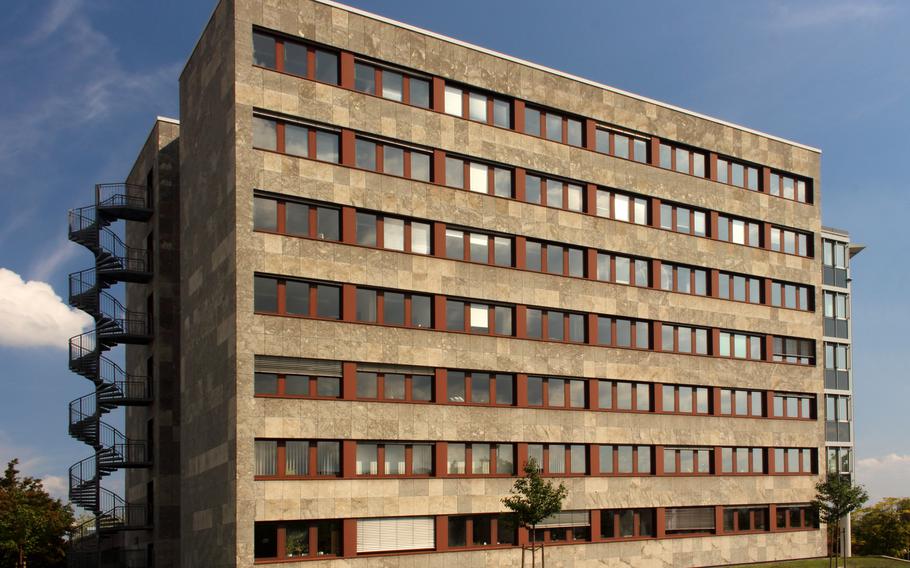 The finance court of the German state of Rheinland-Pfalz in Neustadt, Germany. A ruling from the court released Nov. 23, 2022, said that U.S. military members under the NATO Status of Forces Agreement cannot have their military income taxed by German authorities. (Public Domain)

The Landstuhl-Kusel office has said previously that it has pursued hundreds of American military-affiliated families at any one time for tax payments. In some cases, the penalties they’ve assessed have reached the equivalent of more than $300,000.

Tax offices in other areas also have targeted some of the roughly 100,000 U.S. military personnel and their families, including service members, Defense Department civilians and contractors.

The decision has been appealed by the finance office, setting up an eventual legal showdown in Munich’s supreme court for tax matters. That court’s judgment could resolve once and for all a yearslong dispute between Washington and Berlin over attempts to tax military members.

“Once it dies in court it will stay dead for good,” said Georg Weishaupt, a German tax specialist who is assisting several American families locked in separate tax cases.

Given the nature of the ruling, Weishaupt said he anticipates that at least some pending court cases could be put on hold until the Munich court weighs in.

Two years ago, the U.S. lodged a formal complaint about the tax issue facing hundreds of Americans with military ties in Germany. Defense Secretary Lloyd Austin also has raised the issue with his German counterparts.

But Washington and Berlin have failed to reach a diplomatic solution to resolve the issue. That has left individual service members and civilians to fight it out on their own in court. The toll exacted by the tax assessments has led to long legal challenges and left some Americans in financial ruin.

The latest court battle comes down to legal parsing of the NATO Status of Forces Agreement, which states that host nations can’t tax the military income and benefits of foreign troops and civilian personnel.

However, Germany, unlike every other NATO state that hosts Americans, has sought to collect taxes in certain cases and has imposed penalties.

German finance offices have pointed to Article X of the NATO treaty to justify their efforts, citing SOFA language that states personnel must be in the country “solely” for their job.

If there are indications of other motives for being in Germany, such as being married to a local person, sending children to German schools or extending tours, then income and related benefits such as housing allowances and even commissary privileges can be taxed, German finance officials have claimed.

Those offices say the burden of proof is on the military member, who must demonstrate a “will to return” to the U.S. to avoid taxation.

What constitutes a will to return has never been established and is decided by tax offices on a case-by-case basis. Those offices have even continued to impose penalties after military members have departed Germany — the ultimate proof of will to return.

But the high court in Rheinland-Pfalz said in its ruling that a person’s intentions are irrelevant and that personal ties don’t matter for these tax purposes.

“The fact that there was also a personal relationship with his wife, the plaintiff, is irrelevant here,” the court said.

The court sided with Patrick Rietz, the plaintiff’s Landstuhl-based attorney. He argued that the SOFA’s language makes it clear that being in Germany solely for one’s job is not a prerequisite for the tax exemptions that come with being stationed in the country.

Weishaupt, who has spent the past few years researching SOFA case law and published an article earlier this month in a prominent German tax law journal on misreadings of the NATO treaty, says much of the confusion stems from conflicting high court Munich decisions from decades ago.

In 1971, the Munich fiscal supreme court ruled that two key sentences in Article X were not linked, and as such, military members could not be taxed. A ruling by the court in 1984 came to a different conclusion, which opened the door to tax offices claiming military members must show a willingness to return to avoid taxation.

“Neither ruling explains their decision at any length,” Weishaupt said. “But those judges in 1984 made a mistake.”

Weishaupt also said some of the confusion relates to a muddled German translation of the legally binding English and French versions of the NATO treaty.

For years, the issue flew under the military radar, but over the last several years jurisdictions in Rheinland-Pfalz have become increasingly aggressive in targeting military members.

Given the political stakes, Weishaupt said he wouldn’t be surprised if the Munich court expedites the case.

“This is going to be all or nothing for the finance offices,” he said.