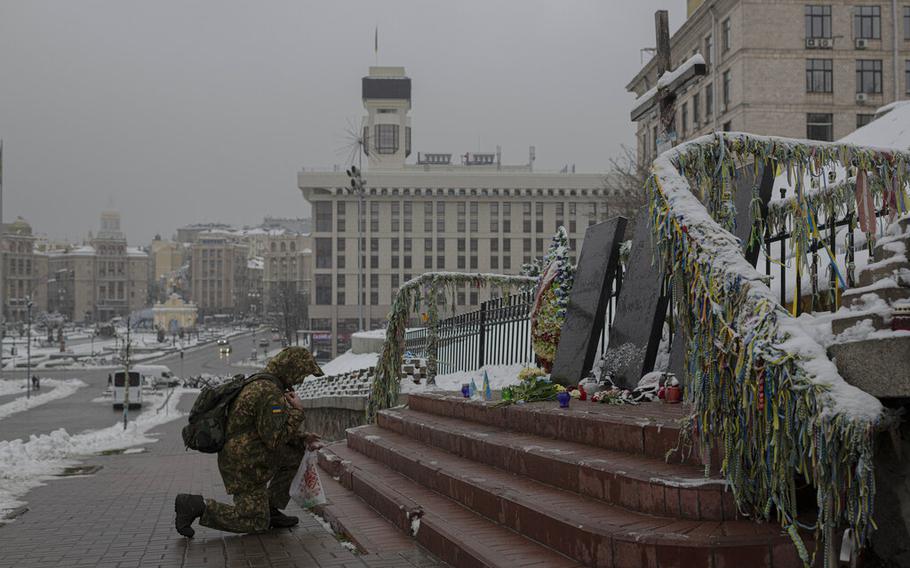 A Ukrainian serviceman kneels in front of a memorial dedicated to people who died in clashes with security forces in Kyiv, Ukraine, on Monday, Nov. 21, 2022. (Andrew Kravchenko/AP)

KYIV, Ukraine — Ukrainian authorities said Tuesday they were investigating the conduct of Russian troops who appeared in a video that Moscow alleged showed them trying to surrender, then being shot.

Video fragments circulated on Russian social media last week that Moscow alleges show that Ukrainian forces killed Russian troops who may have been trying to surrender, after one of the men seemingly refused to lay down his weapon and opened fire.

Ukraine's Prosecutor General's office said in a statement Tuesday that a probe has been launched on charges of violating the laws or customs of war over what they said was "feigning surrender and opening fire on the soldiers of the Armed Forces of Ukraine" by the Russian servicemen.

The move comes after Russian authorities announced their own criminal investigation based on the snippets posted on Russian Telegram channels and relayed on other social media. They present a muddled and incomplete picture.

Olha Stefanishyna, Ukraine's deputy prime minister overseeing the country's push to join the European Union, said last weekend that "it is very unlikely" that the short, edited snippets show what Moscow claims. She said that Ukrainian forces are under direct orders to take as many prisoners as possible so they can be swapped in prisoner exchanges with Russia.

Ukraine's presidential adviser, Mykhailo Podolyak, said in an interview Tuesday that Kyiv has a full version of the video, which it intends to release at some point.

Podolyak argued that the full video showed that "Russian troops indeed intended to surrender, and some opened fire at the Ukrainians who were trying to carry out the procedure (of surrendering)."

The full video, the official said, showed two Russian servicemen "come out and start shooting at people, at Ukrainian servicemen." Podolyak said "there is a bit of a blur on the second character," but one "is clearly visible."

Beth Van Schaack, the U.S. ambassador-at-large for Global Criminal Justice, told reporters on Monday that "it's really important to emphasize that the laws of war apply to all parties equally, both the aggressor state and the defender state."

"But when it comes to the war in Ukraine, that's really where the equivalency ends. When we're looking at the sheer scale of criminality exhibited by Russia's forces, it's enormous compared to the allegations that we have seen against Ukrainian forces," Van Schaack said.