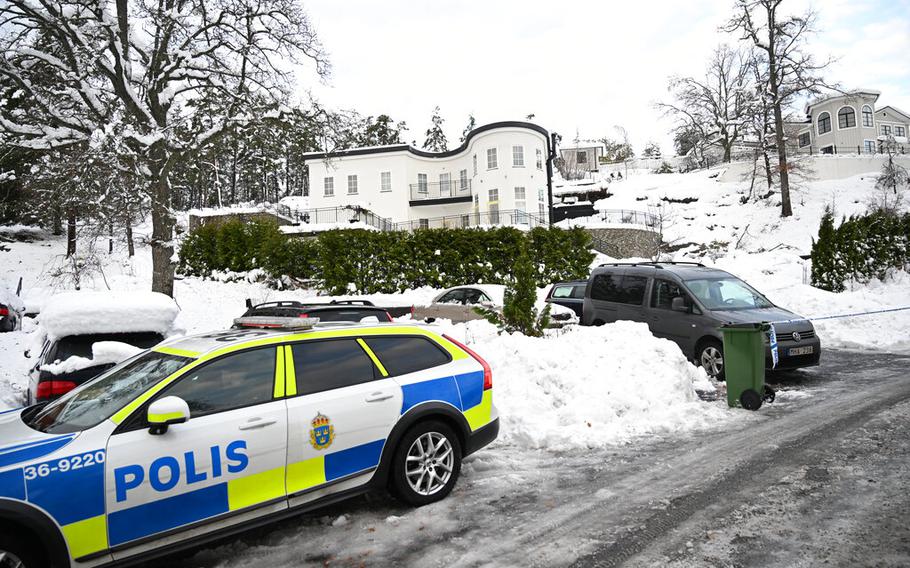 A police car is parked outside a house where the Swedish Security Service allegedly arrested two people on suspicions of espionage in a predawn operation in Stockholm, Tuesday, Nov. 22 2022. (Fredrik Sandberg/TT News Agency via AP)

STOCKHOLM — Swedish authorities arrested two people on suspicion of espionage in a predawn operation Tuesday in the Stockholm area.

The authorities gave few details about the case, but Swedish media cited witnesses who described elite police rappelling from two Black Hawk helicopters to arrest a couple that had allegedly spied for Russia.

Sweden's Prosecution Authority said one of the two was accused of "gross illegal intelligence activities against Sweden and against a foreign power." The authority did not identify the other country allegedly spied on.

Sweden's security agency said the operation, which included house searches, was carried out with the assistance of the police and the Swedish Armed Forces, which provided helicopters. The spy agency said a probe "has been ongoing for some time."

The agency did not identify which country the two suspects worked for or give any other details. Swedish media reported the suspects are a man and a woman in their 60s and that they are a couple. The Swedish newspaper Aftonbladet reported that they were Russians who arrived in Sweden in the late 1990s.

The Associated Press could not immediately confirm those reports.

Fredrik Hultgren Friberg, a spokesperson for Sweden's domestic security service, known by its acronym SAPO, told the Aftonbladet tabloid that "there was a need to quickly arrest the suspects."

Stefan Hector, head of the Swedish police national operative department, said Operation Spear, which took place in a business south of Stockholm, took under a minute and said that the swift action was needed because the suspects should "not be able to flush anything in the toilet or destroy computers."

Tuesday's developments follow the arrest of two Iranian-born brothers who were charged earlier this month in Sweden with alleged spying for Russia. One of them, both naturalized Swedes, worked for Sweden's domestic intelligence agency. They were charged with spying for the GRU, Russia's military intelligence service, for around a decade, from 2011 to 2021.

The prosecution authority stressed that Tuesday's development was not linked to the previous case.