Funeral held for first of 2 Poles killed in missile blast 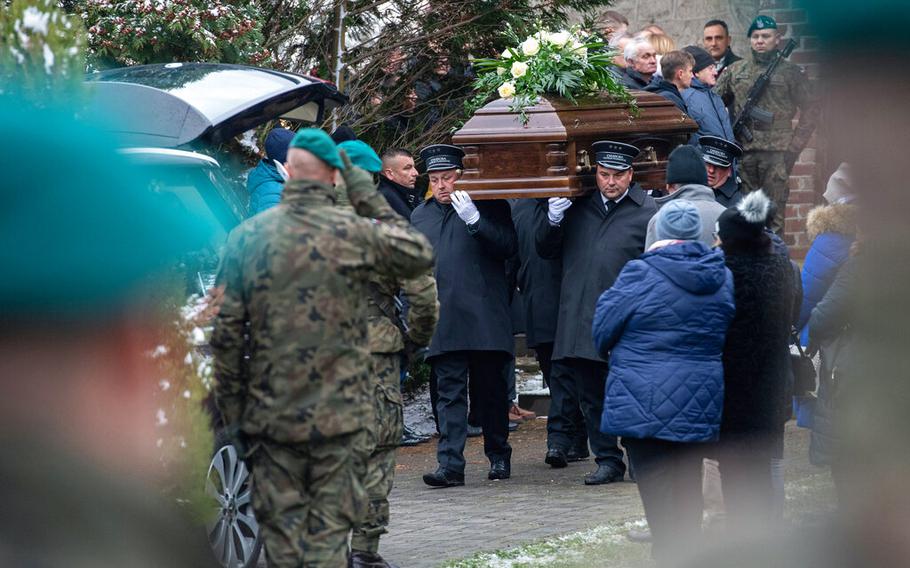 Pallbearers in Przewodow, Poland, on Nov. 19, 2022, carry the coffin of Boguslaw Wos, one of two Polish men killed in a missile explosion believed to have been caused by a Ukrainian air defense missile that went astray as the country was defending itself against a barrage of Russian missiles. (AP)

WARSAW, Poland — A funeral was held Saturday for one of two Polish men who died in a missile explosion near the border with Ukraine, deaths that Western officials said appeared to have been caused by a Ukrainian air defense missile that went astray.

White roses were placed on the wooden casket of Boguslaw Wos, described by the Polish state news agency PAP as a 62-year-old warehouse manager. A pallbearer carried a black-and-white photo of him, while another carried a crucifix bearing his name.

Wos and another man died Tuesday in Przewodow, a small farming community 4 miles from the border with Ukraine as that country was defending itself against a barrage of Russian missiles directed at Ukraine's power infrastructure.

Officials from Poland, NATO and the United States say they think Russia is to blame for the deaths no matter what because a Ukrainian missile would not have gone astray in Poland had the country not been forced to defend itself against Russian attacks.

A Polish investigation to determine the source of the missile and the circumstances of the explosion has been launched with support from the U.S. and Ukrainian investigators. The Pentagon sent a small team of forensics and explosive ordnance experts to the missile impact site, a senior defense official said Friday on condition of anonymity, because they were not authorized to discuss details.

At the funeral, Border Guard officers in fatigues saluted as a hearse arrived at the church, with snow falling. After the funeral Mass, the officers played a funeral march, leading a procession to the village cemetery, followed by the hearse and many mourners.

A military honor guard and Polish officials and Ukrainian representatives joined the man's family and members of the community. Ukraine's consul general in the nearby city of Lublin placed a wreath in the colors of Ukraine, PAP reported.

The other victim, a 60-year-old tractor driver, is to be buried Sunday.