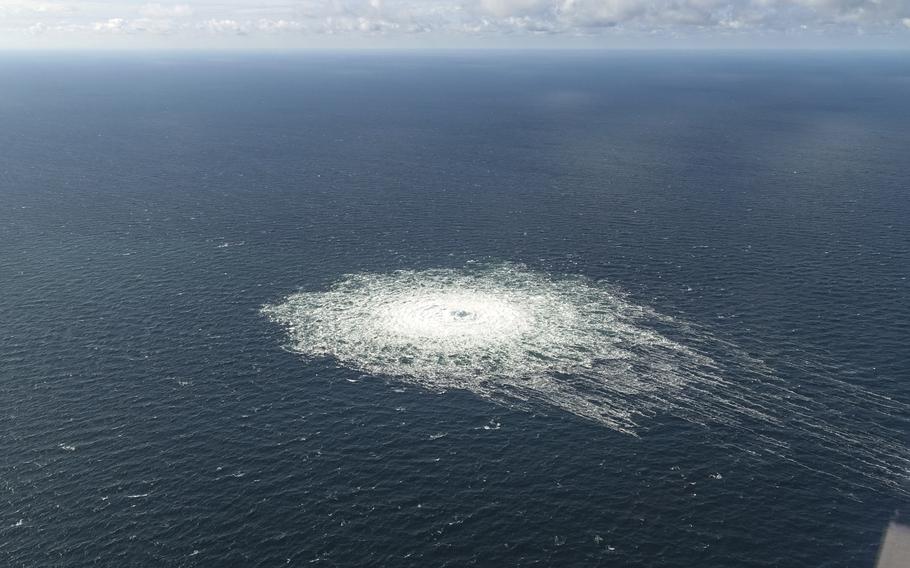 A large disturbance in the sea can be observed off the coast of the Danish island of Bornholm on Tuesday, Sept. 27, 2022 following a series of unusual leaks on two natural gas pipelines running from Russia under the Baltic Sea to Germany have triggered concerns about possible sabotage. (Danish Defence Command )

Swedish prosecutors said Friday that explosions at the Nord Stream gas pipelines in September were the result of "gross sabotage." Their investigation also discovered "traces of explosives on several of the foreign objects that were found" at the site of the blasts.

The findings support the suspicions of many European policymakers that the blasts - which hit the major underwater natural gas pipelines in the Baltic Sea that connect Russia with Germany - were deliberate. Prosecutors did not provide further details or assign blame but said the "complex" investigation was continuing. A Kremlin spokesman agreed with the sabotage findings and said it was important to "find those behind the explosions."

In Ukraine, as winter sets in and the season's first snow fell in Kyiv, "more than 10 million Ukrainians are without electricity," President Volodymyr Zelensky said in a nightly address late Thursday. Those most affected are in the capital, Odessa and Vinnytsia regions, he added. The blackouts follow damage to the country's power infrastructure after a barrage of Russian strikes Thursday in apparent retaliation for battlefield setbacks.

Here's the latest on the war and its impact across the globe.

• "Advanced analysis work is still in progress" over the investigation into the Nord Stream pipelines that "have been subjected to gross sabotage," Sweden's security service said. The agency added in a statement that "the investigation is extensive and complex and will eventually show whether anyone can be suspected of, and later prosecuted for this." The crime of gross sabotage carries a more severe sentence than ordinary sabotage under Swedish law.

• Russia is hoping for a "positive result" for its imprisoned national Viktor Bout, in any exchange with the United States, Deputy Foreign Minister Sergei Ryabkov said Friday, according to state media. "Viktor Bout is among those who are being discussed, and we certainly count on a positive result," he said. There is speculation that Bout, a notorious arms dealer imprisoned in the United States, could be part of a prisoner swap to secure the release by Russia of WNBA star Brittney Griner and security consultant Paul Whelan.

• Fortification work is being carried out in Crimea to guarantee the safety of its inhabitants, said the Russian head of Crimea's administration, Sergei Aksyonov, on Friday. What type of work is underway is unclear, but Britain's Defense Ministry said separately that Russian "units have constructed new trench systems near the border of Crimea," as well as near the Siversky-Donets River between Donetsk and Luhansk. "Some of these locations are up to 60 km [37 miles] behind the current front line, suggesting that Russian planners are making preparations in case of further major Ukrainian breakthroughs," the ministry said Friday.

• A Dutch court convicted in absentia two Russians and a Ukrainian separatist of murder in the shooting down of Malaysia Airlines Flight MH17, which was hit by a missile over eastern Ukraine in 2014, killing all 298 passengers and crew. The conviction Thursday implicates Russia's government, which denies any involvement and has refused to extradite the defendants or cooperate with investigators. The Kremlin claimed Friday that Moscow had faced "exclusion" from the proceedings and doubted the "objectivity" of the investigation. The defendants remain at large.

• Russia is likely to redeploy troops from Kherson to Donetsk, Britain's Defense Ministry said. The movement of Russia's forces from Kherson will aim to "reinforce and expand its offensive operations near the town of Bakhmut in Donetsk," it said Friday.

• Russian strikes hit "critical infrastructure" in Kharkiv on Friday, according to regional governor Oleh Synyehubov. "There is damage to gas industry equipment in the Izyum district," he said on Telegram, and at least eight people were reported injured. In Donetsk, officials reported "isolated shelling" overnight but "without civilian casualties." The Washington Post could not independently verify the reports.

• Russian shelling killed at least nine people and destroyed a residential building in Zaporizhzhia, according to Ukraine's emergency services on Friday. Rescue operations are still underway, a day after the area was hit by Russian rockets, the services said. President Zelensky warned that the number of victims may increase because rubble is still being cleared.

• Pope Francis said the Vatican is ready to help mediate an end to the war. "Everyone must commit to demilitarizing hearts, starting with their own. . . . We must all be pacifists," the pontiff told Italy's La Stampa newspaper in an interview Friday. He called on leaders in Kyiv and Moscow not to give up on dialogue.

• The European Union's top diplomat said Russia did not appear ready to withdraw its troops from Ukraine, making it impossible to seek a peace deal. "It is Russia who has to make peace possible. The aggressor has to withdraw if he wants a sustainable peace," Josep Borrell told Reuters in Uzbekistan.

• The Kremlin has ruled out a summit between President Vladimir Putin and President Biden, spokesman Dmitry Peskov told reporters Friday. "A summit is not being discussed at this point," he said. Meanwhile, Russian Deputy Foreign Minister Sergei Ryabkov told state media, "There is simply nothing to talk about Ukraine with them [the Americans]."

• Asia-Pacific leaders at Bangkok summit largely condemn Ukraine war. The Asia-Pacific Economic Cooperation (APEC) summit, issued a joint statement Friday from the attending ministers saying that many members condemned the war but acknowledging "there were other views and different assessments of the situation and sanctions." The statement added that APEC was not the forum in which to resolve security disputes. Russia, the aggressor in the Ukraine war, and China, which has close ties with Russia, are APEC members.