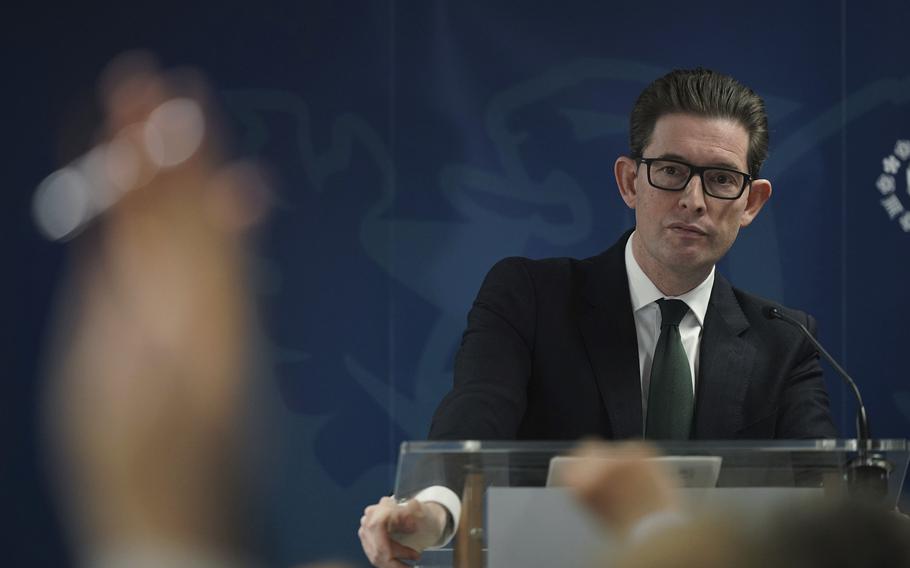 LONDON — Britain faces major security threats from the trio of Russia, China and Iran, which all use coercion, intimidation and even violence on foreign soil to pursue their interests, the U.K.'s domestic intelligence chief said Wednesday.

Ken McCallum, director-general of MI5, added to mounting warnings from British authorities about Russia's aggression and China's growing assertiveness. But he singled out Iran as the state "which most frequently crosses into terrorism," saying U.K authorities have uncovered at least 10 "potential threats" this year to "kidnap or even kill British or U.K.-based individuals perceived as enemies of the regime."

He said Iran's intelligence services "are prepared to take reckless action" against opponents, both on Western soil and by luring people to Iran.

Last week, the U.K. government summoned Tehran's top diplomat in London for a dressing-down, accusing the Islamic republic of threatening journalists working in Britain. U.K-based Farsi-language satellite news channel Iran International said British police had warned two of its journalists about "an imminent, credible and significant risk to their lives and those of their families."

In a speech outlining the major threats to the U.K. from both hostile states and terror groups, McCallum said there is a risk Russia, China and Iran could help one another, "amplifying their strengths."

"We are facing adversaries who have massive scale and are not squeamish about the tactics they deploy," he said.

He said Russia's espionage capabilities had been dealt a "significant strategic blow" since the invasion of Ukraine from the expulsion of more than 400 spies working under diplomatic cover at Russian missions in Europe. He said Britain has expelled 23 in recent years, and has refused visas for more than 100 other suspected Russian spies posing as diplomats.

But, he said, British spies are still facing a "Russian covert toolkit" that includes assassination attempts, cyberattacks, disinformation, espionage and interfering with democracy.

"The U.K. must be ready for Russian aggression for years to come," he said.

McCallum cast China as an even longer-term problem, saying "the activities of the Chinese Communist Party pose the most game-changing strategic challenge to the U.K."

Using a sports analogy, McCallum said "Russia thinks nothing of throwing an elbow in the face and routinely cheats to get its way."

"The Chinese authorities present a different order of challenge," he said. "They're trying to rewrite the rulebook, to buy the league, to recruit our coaching staff to work for them."

He also said Chinese authorities were playing a long game, trying to shape British politics by "seeking to co-opt and influence not just prominent parliamentarians across the political landscape, but people much earlier in their careers in public life, gradually building a debt of obligation." He said local-authority councilors and prospective parliamentary candidates were among those in Beijing's sights.

He said such activities were likely to grow as Chinese President Xi Jinping "consolidates power on an indefinite basis."

At a Group of 20 summit in Indonesia this week, Prime Minister Rishi Sunak said China posed "a systemic challenge to our values and interests and it represents the biggest state-based threat to our economic security."

Speaking at MI5's high-security London headquarters, McCallum said Britain still faces a terror threat from both self-radicalized lone actors and groups such as al-Qaida and IS, which he said "are down but definitely not out."

He said MI5 had disrupted 37 "late stage" attack plots since 2017, eight of them in the past year. Three-quarters were driven by Islamic extremism and the rest by far-right ideology, he said.

McCallum also said his agents and police had done "quietly effective work" to ensure the safety of 10 days of national mourning that followed the death of Queen Elizabeth II in September. The commemorations brought the biggest crowds in decades into London, as hundreds of thousands lined up to see the late monarch lie in state or watch her funeral procession.

He said no major attack plots were uncovered, but agents worked to respond to possible "early stage" attacks, as well as doing "protective security work."

"There was nothing close to a late-stage goal-line clearance in respect to those events," he said. "But there was good work done in a low-key way behind the scenes."