US urges world to tell Russia to stop its nuclear threats 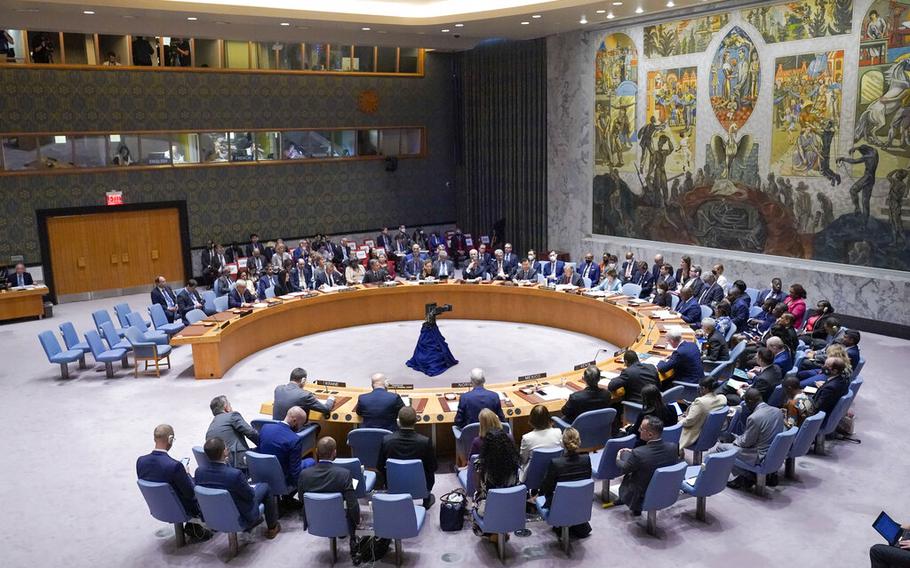 UNITED NATIONS — The United States called on other nations to tell Russia to stop making nuclear threats and end "the horror" of its war in Ukraine as all three countries' top diplomats spoke — but didn't quite meet — at a high-profile U.N. Security Council meeting Thursday.

Held alongside the annual U.N. General Assembly gathering of world leaders, the session followed a striking development in the war this week: Russia called up a portion of its reserves for the first time since World War II. At the same time, President Vladimir Putin said his nuclear-armed country will "use all means available to us" to defend itself if its territory is threatened.

U.S. Secretary of State Antony Blinken saw Putin's remark as particularly menacing given plans for referendums in Russian-controlled parts of eastern and southern Ukraine on whether to become part of Russia. 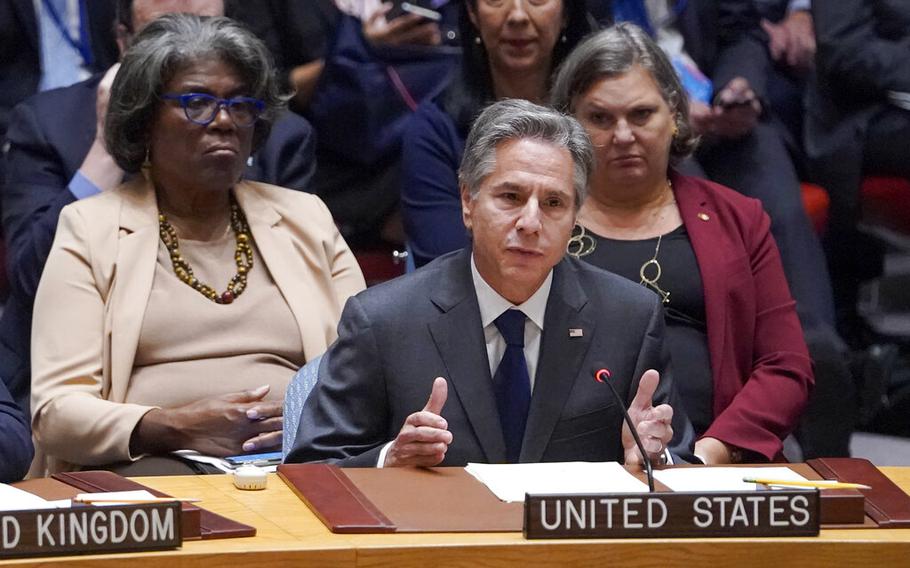 Western nations have condemned those votes as illegitimate and nonbinding. But, in their wake, Moscow might then see any Ukrainian attempt to retake those areas as an attack on "Russian territory," Blinken warned.

"Every council member should send a clear message that these reckless nuclear threats must stop immediately," he said.

Russian Foreign Minister Sergey Lavrov didn't mention his country's nuclear capacity or the new troop mobilization during his own remarks at the council meeting, which France called to discuss accountability for alleged abuses and atrocities during the nearly seven-month-long war.

Instead, Lavrov repeated his country's frequent claims that Kyiv has long oppressed Russian speakers in Ukraine's east — one of the explanations Moscow has offered for the invasion — and that Western support for Ukraine is a menace to Russia.

"What's particularly cynical is the position of states that are pumping Ukraine full of weapons and training their soldiers," he said, maintaining that their goal is to prolong fighting "to wear down and weaken Russia." 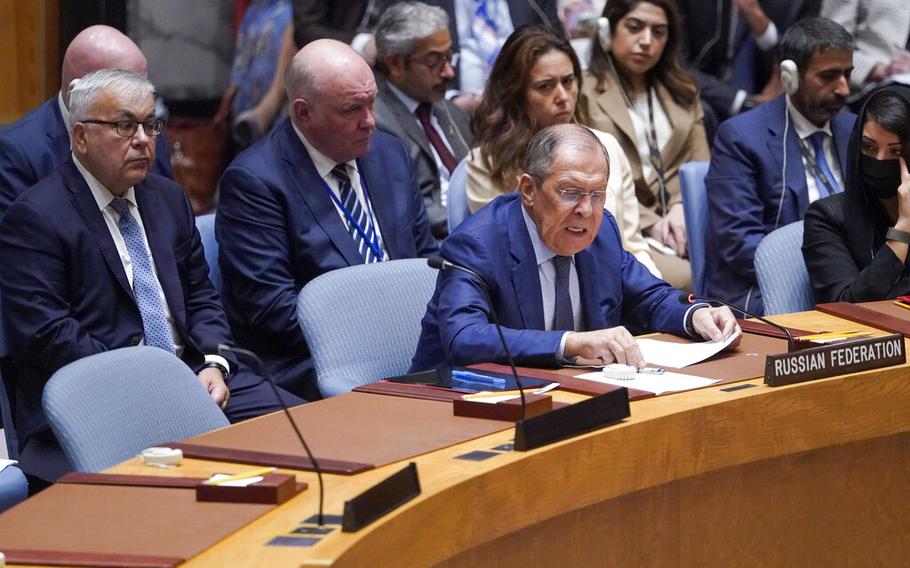 "That policy means the direct involvement of the West in the conflict," said Lavrov. He added that Ukraine had become "an anti-Russia staging ground to create threats against Russian security" and his country wouldn't accept it.

The Security Council has held dozens of contentious meetings on Ukraine since the war began in February, but Thursday's session had special stature.

"That President Putin picked this week, as most of the world gathers at the United Nations, to add fuel to the fire he started shows his utter contempt and disdain for the U.N. Charter, the U.N. General Assembly and this council," Blinken told foreign ministers around the council's famous horseshoe-shaped table.

Regardless, no one expects the council to act against Russia, since Moscow has veto power as a permanent member.

But the meeting was still a rare moment for top diplomats from Ukraine and Russia to appear in the same room — made all the more extraordinary for the fact that Lavrov is under U.S. sanctions.

In a sign of the charged atmosphere, Ukrainian Foreign Minister Dmytro Kuleba apparently objected as council staffers prepared to put a placard marking Ukraine's seat next to Russia's. The placard was ultimately moved to another spot. 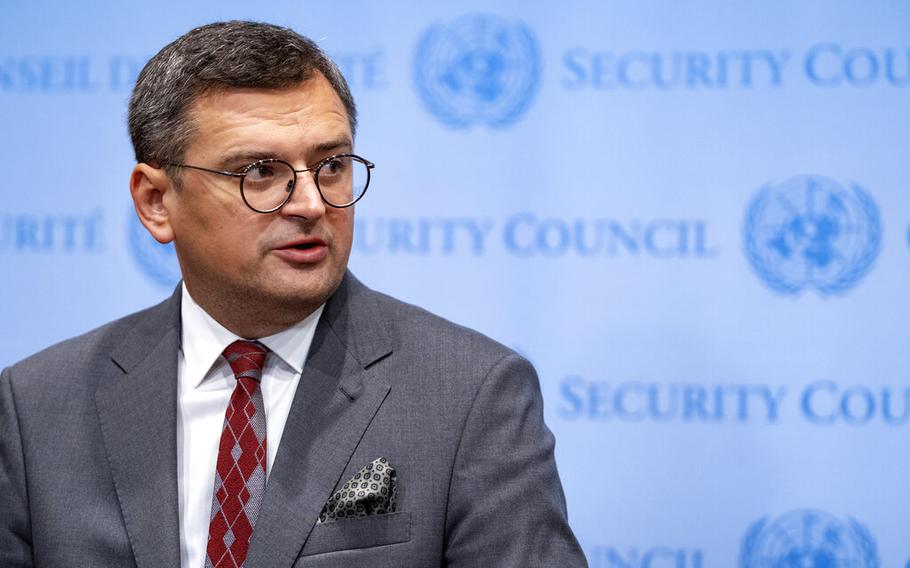 Ahead of the meeting, Kuleba wryly told reporters that he planned to keep a "social distance" from Lavrov. But it turned out he didn't have to: The Russian appeared only just before speaking and left right after, prompting Kuleba to quip later in his own speech that "Russian diplomats flee almost as quickly as Russian soldiers."

In another undiplomatic exchange, Lavrov accused the U.S. and allies of covering up alleged misdeeds by Ukrainian President Volodymr Zelenskyy's government on the rationale that "he's a son of a bitch, but he's our son of a bitch." Kuleba later chided Russia for the "inappropriate slang."

Blinken argued that Russia should face further censure and isolation for its invasion, pressing other countries to join in Washington's forceful condemnations of the conflict. He cited the discovery of mass graves in Ukraine and repeated allegations from Ukrainians that they were tortured by Russian soldiers, while suggesting that more could come.

The International Criminal Court opened an investigation in March into possible crimes amid the war and sent teams to gather evidence. Prosecutor Karim Khan told the council Thursday that he's dispatching more ICC staffers next week to look into allegations emerging from eastern Ukraine.

Khan hasn't yet announced any charges linked to the conflict, but he reiterated to the council that he believes there are reasonable grounds to think that crimes have been committed.

"The picture that I've seen so far is troubling indeed," he said.

The meeting came less than a week after Ukraine's Zelenskyy said Friday announced the discovery of a mass burial site near a northeastern city, Izium, that had recently been recaptured from Russian forces. Zelenskyy said investigators found evidence that some of the dead were tortured.

The discovery prompted France to send more investigators to join others who have been in Ukraine since hundreds of civilians were found dead in another city, Bucha, after a Russian withdrawal in late March, French Foreign Minister Catherine Colonna told the council.

There are "so many violations of the laws of war and so many actions for which Russia must be held accountable," she said.

Other council members also called for accountability, but in varying tones. 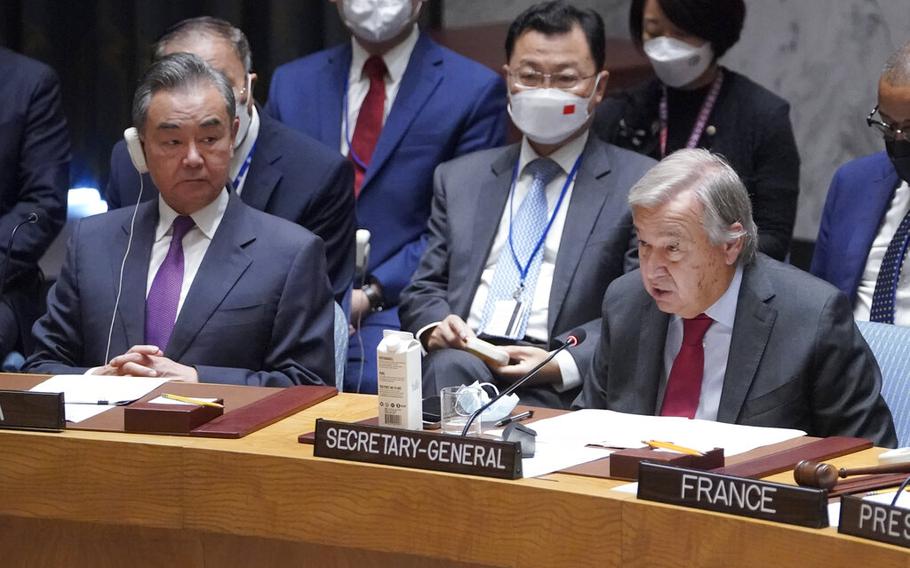 "Investigations into violations of international humanitarian law should be objective and fair, based on fair facts, rather than an assumption of guilt, and without being politicized," said Foreign Minister Wang Yi of China, which has maintained strong ties with Russia.