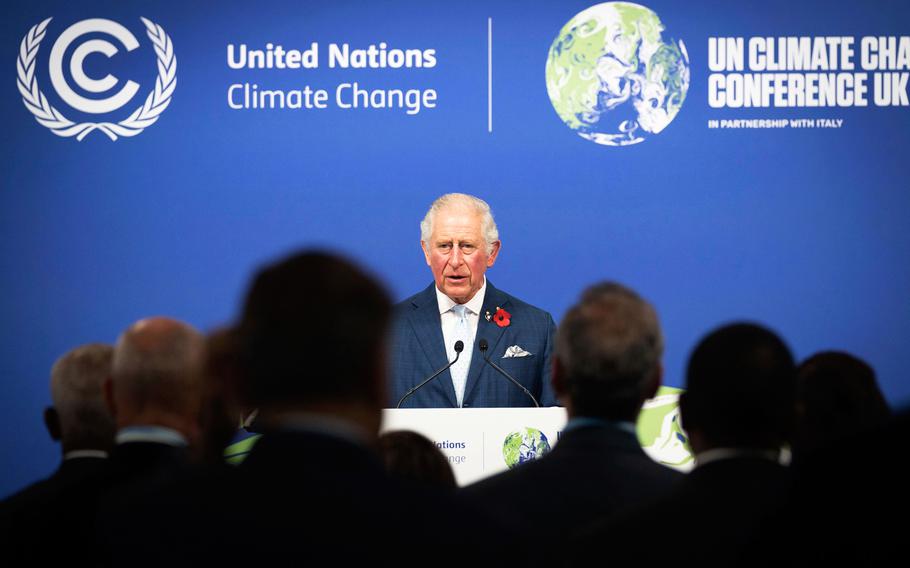 Britain's then-Prince Charles addresses a Commonwealth Leaders' Reception, at the COP26 Summit, at the SECC in Glasgow, Scotland. (Stefan Rousseau/AP)

LONDON — On a blustery November day last year Britain's future king stood before world leaders to deliver a rallying cry that they should "act with all despatch, and decisively” to confront a common enemy.

The clarion call — in the vast, windowless hall of a Glasgow convention center at the opening of the U.N. climate conference — concerned an issue long dear to the heart of the then-Prince Charles.

Climate change and loss of biodiversity were no different from the COVID-19 pandemic sweeping the globe, he said. “In fact, they pose an even greater existential threat, to the extent that we have to put ourselves on what might be called a war-like footing.”

He warned leaders that time was running out to reduce emissions, urging them to push through reforms that are “radically transforming our current fossil fuel-based economy to one that is genuinely renewable and sustainable.”

“We need a vast military-style campaign to marshal the strength of the global private sector," he said, adding that the trillions at businesses' disposal would go far beyond what governments could muster and offered "the only real prospect of achieving fundamental economic transition.”

It was a fierce call to arms quite unlike the gentle appeal delivered by his mother, Queen Elizabeth II, in a video message that evening.

For decades, Charles has been one of Britain's most prominent environmental voices, blasting the ills of pollution. Now that he’s monarch, he is bound to be more careful with his words and must stay out of politics and government policy in accordance with the traditions of Britain’s constitutional monarchy.

“Charles will have very little freedom of maneuver now that he is King," said Robert Hazell, an expert on British constitutional affairs at University College London.

“All of his speeches are written or vetted by the government,” said Hazell. "If he makes an impromptu remark which seems at odds with government policy, the press will pounce on him to point out the inconsistency, and the government will rein him in; he will have to be far less outspoken than he has been in the past.”

Still, many say it’s unlikely he will abruptly stop discussing climate change and the environment – not least because they are issues that are above political ideology.

Australia’s Prime Minister Anthony Albanese said last week that it would be “perfectly acceptable” for the monarch to advocate for climate action, even though his role is meant to be apolitical.

“It’s important that the monarchy distance from party political issues,” Albanese told Australian Broadcasting Corp. “But there are issues like climate change where I think if he chooses to continue to make statements in that area, I think that is perfectly acceptable.”

“It should be something that’s above politics, the need to act on climate change,” he added.

Keeping mum on climate may be particularly tricky for Charles in light of the current Conservative government’s ambivalent stance. While the government says it remains committed to the goal of cutting greenhouse gas emissions to ‘net zero’ by mid-century, Energy Secretary Jacob Rees-Mogg says Britain should keep burning the fossil fuels at its disposal.

“We need to be thinking about extracting every last cubic inch of gas from the North Sea,” he said in a recent radio interview, citing the need for energy security.

In the past Rees-Mogg has spoken out against building more on-shore wind farms in Britain and questioned the effect that rising carbon dioxide emissions are having on the climate, even though experts say the warming effects of increasing CO2 levels are clear.

Britain’s new Prime Minister Liz Truss likewise favors exploiting the country’s natural gas reserves, including by exploring fracking in parts of the UK to boost the country’s domestic gas supplies and reduce dependence on international gas prices. Earlier this month, Truss’s government lifted a 2019 ban on the controversial practice of fracking for shale gas in England.

As environment secretary in 2014, Truss called large-scale solar farms “a blight on the landscape” scrapped subsidies for farmers and landowners to build them.

Speaking in a 2018 BBC documentary marking Charles’ 70th birthday, his sons William and Harry revealed the frustration their father feels at the world’s failure to tackle environmental challenges. They recalled how, as teenagers, Charles would make them go litter picking during the holidays and obsess over the need to turn off lights.

Such small actions pale in comparison to the air miles the monarch has racked up over a lifetime of jetting around the world — though he claims to have converted his Aston Martin to run on surplus white wine and cheese.

Charles’ lament that many people “simply pay no attention to science” on climate change has also been called out by those who point out that he has long been an advocate of unproven naturopathic therapies.

Some of Charles’ subjects want him to continue the fight against climate change, even as king.

Yet the new king himself has acknowledged that his role as eco-warrior cannot last, at least in its current form.

"I’m not that stupid," he told the BBC four years ago on being asked whether he would continue his activism as before.

The battles of a prince are not those of a king, he explained, but made clear that they can still be fought by the next in line, Prince William.

In his first address as sovereign to the nation on Sept. 9, Charles emphasized that, saying “it will no longer be possible for me to give so much of my time and energies to the charities and issues for which I care so deeply.”

“But I know this important work will go on in the trusted hands of others,” he added.

Like Charles, William, 40, has made climate change one of his main advocacy topics, and last year he made his mark by awarding the first Earthshot Prize, an ambitious “legacy project” the prince founded to award millions of pounds in grants for environmental initiatives around the world over the next 10 years. His efforts, however, have been undermined by criticism that his conservation charity invested in a bank that is one of the world’s biggest backers of fossil fuels.