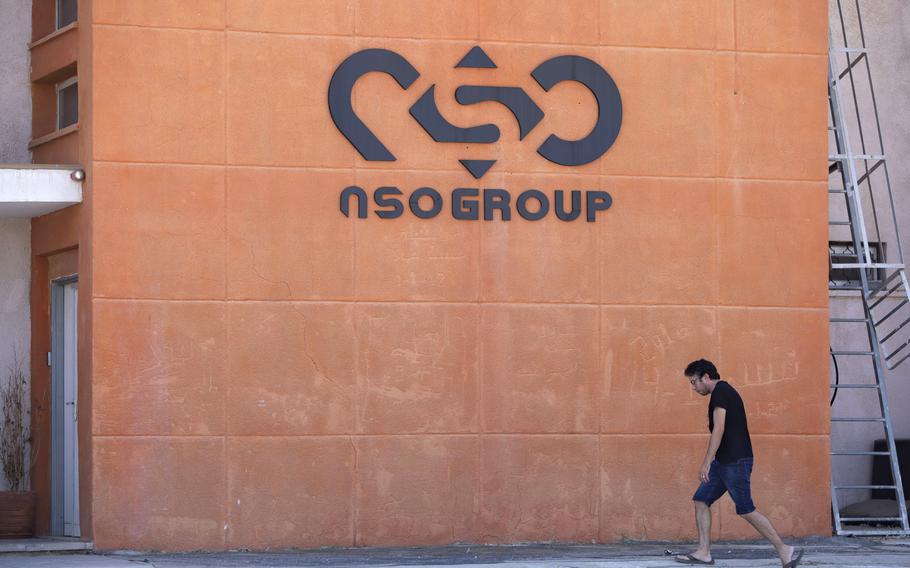 A logo adorns a wall on a branch of the Israeli NSO Group company, near the southern Israeli town of Sapir, Aug. 24, 2021. European Parliament members investigating the use of surveillance spyware by European Union governments sharply criticized Israel on Wednesday, Sept. 21, 2022, for a lack of transparency in allowing the sale of powerful Israeli spyware to European governments that have used it against critics. (Sebastian Scheiner/AP)

WARSAW, Poland — European Parliament members investigating the use of surveillance spyware by European Union governments sharply criticized Israel on Wednesday for a lack of transparency in allowing the sale of powerful Israeli spyware to European governments that have used it against critics.

The European lawmakers also condemned the Polish government for refusing to meet with them during a fact-finding visit to Warsaw that ended Wednesday.

"It is regrettable and we condemn the fact that the Polish authorities did not want to cooperate with our investigation committee," Jeroen Lenaers, the head of the delegation, said at a news conference in Warsaw.

"We think it also is a telling sign of the complete lack of importance this government attaches to checks and balances, to democratic scrutiny and to dialog with elected representatives."

The committee is investigating the use by governments of Israel's Pegasus spyware and other invasive surveillance tools, viewing such technology as a threat to democracy in the 27-nation bloc.

Pegasus was developed by Israel's NSO Group and is designed to breach mobile phones and extract vast amounts of information from them, including text messages, passwords, locations and microphone and camera recordings. The company markets the technology as a tool to target criminals but many cases have been discovered worldwide of governments using it against dissidents, journalists and political opponents.

In Europe, cybersleuths have found traces of Pegasus or other spyware in Poland, Hungary, Spain and Greece.

Sophie in 't Veld, the raporteur of the inquiry, said the committee has learned that the NSO group has sold spyware to 14 EU governments, using export licenses issued by the Israeli government. It learned that NSO stopped selling to two of those, but won't say which ones. They are widely believed to be Poland and Hungary due to their democratic backsliding.

"Why can we not say with certainty that Poland was one of the two countries of which the contract has been terminated?" she said. "Why is it that NSO is allowed to operate in the European Union, conduct its finances through Luxembourg, sell its products to now 12 member states, products that have been used to violate the rights of European citizens and to attack democracy of the European Union?"

Israel, an ally, should "cooperate with us in the protection of our citizens," she said.

In 't Veld also she would expect most EU countries to use spyware in rare cases, and with oversight, but that others including Poland have used it "against citizens," making it "a tool for an authoritarian political agenda."

Greece has been rocked by revelations that Nikos Androulakis, a European Parliament member and head of Greece's third-largest political party, was put under surveillance last year with Predator spyware when he was running for his PASOK party's leadership. A financial journalist also was under surveillance.

That follows revelations of spyware use against government critics in Poland and Hungary and against Catalan separatists in Spain.

During their visit, which began Monday, the 10-member delegation met with Poles targeted by the spyware, including a prosecutor and a senator, and other officials including members in the opposition-controlled Senate investigating Pegasus use.

They will publish a report on their findings and recommendations on Nov. 8.