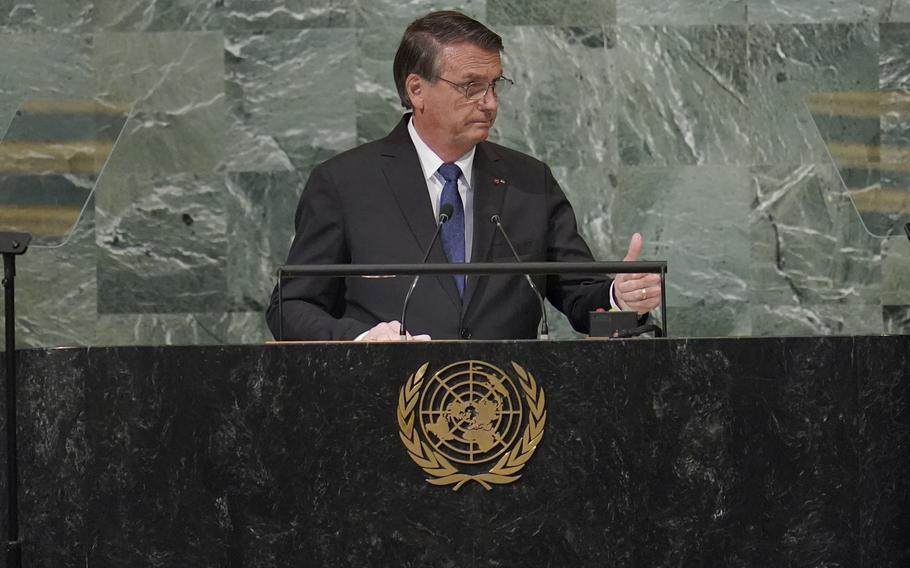 RIO DE JANEIRO — Brazil's President Jair Bolsonaro on Tuesday repeated his willingness to foster negotiations to resolve the conflict between Russia and Ukraine, calling for a cease-fire but renouncing sanctions and economic isolation.

"We have tried to avoid blocking the channels of dialogue caused by the polarization around the conflict," Bolsonaro said, during a speech at the U.N. General Assembly. "The consequences of the conflict are already being felt in world prices for food, fuel and other supplies. This impact puts us all against the goals of sustainable development."

The Brazil president noted how some countries that were once leaders in low carbon emissions had now turned to more polluting sources of energy.

Bolsonaro was the first world leader to speak during debate on the first day of the meeting. U.S. President Joe Biden would traditionally speak second, but his time was pushed to Wednesday because of the funeral of England's queen.

The far-right leader, who is seeking reelection next month, also used his speech to promote the merits of his administration. His speech focused heavily on the economy, starting with the generous welfare program distributed to millions of Brazilians during the pandemic, and which was recently renewed until December.

"In spite of the global crisis, Brazil reached the end of 2022 with an economy in full recovery," Bolsonaro said, stressing a falling unemployment rate and disinflation in Latin America's largest nation.

Critics of his government rebuked his claims that poverty is falling, or that the majority of Brazil's Amazon rainforest remains pristine.

Recent studies show that food insecurity has been on the rise, now surpassing the world average, according to the Getulio Vargas Foundation, a university and think tank.

And deforestation has surged to the worst in 15 years. That led to more fires in August than in any month in nearly five years, according to Brazil's national space institute.

Bolsonaro also took a dig at his main rival, former President Luiz Inácio Lula da Silva, who leads all polls to return to the presidency he held between 2003 and 2010. Bolsanaro pointed to da Silva's convictions for money laundering and corruption, without saying that they were later annulled by the Supreme Court.