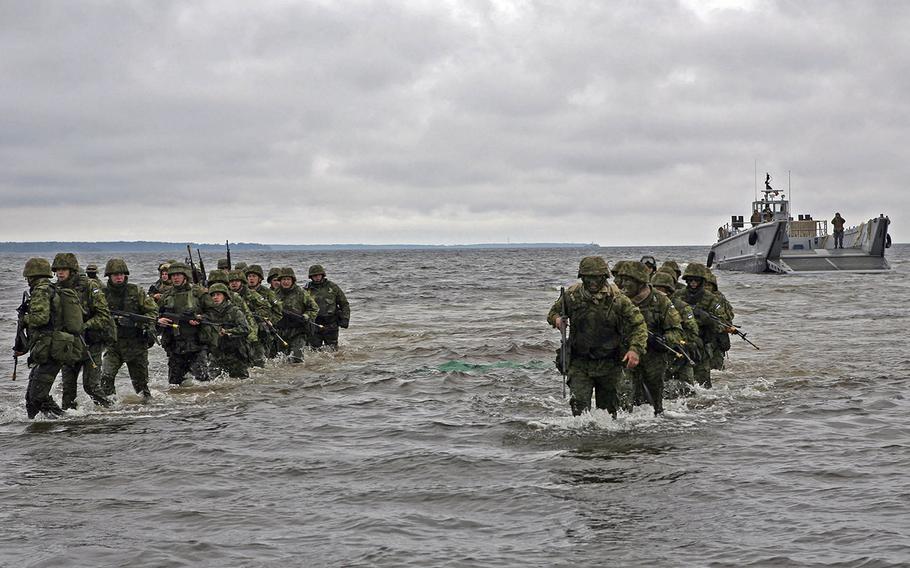 WARSAW, Poland — Estonia, Latvia and Lithuania closed their borders Monday to most Russian citizens in response to the wide domestic support in Russia for the war in Ukraine.

Under the coordinated travel ban, Russians wishing to travel to the Baltic countries as tourists or for business, sports or cultural purposes will not be allowed in even if they hold valid visas for the European Union’s checks-free Schengen Area.

The prime ministers of the three Baltic nations and Poland agreed earlier this month to stop admitting Russian citizens, saying the move would protect the security of the four European Union member nations.

“Russia is an unpredictable and aggressive state. Three-quarters of its citizens support the war. It is unacceptable that people who support the war can freely travel around the world, into Lithuania, the EU,” Lithuanian Interior Minister Agne Bilotaite said Monday.

“Such support for hostilities can pose threats to the security of our country and the EU as a whole,” she added.

In the eastern Polish city of Bialystok, a member of the Russian Culture and Education Association in Poland said a new ban would have hit much harder if the pandemic restrictions had not already largely limited travel with Russia.

“After more than two years of restrictions, we see no prospects for an improvement, and that is the worst part,” Andrzej Romanczuk, a Polish citizen, told The Associated Press.

He said regions on both sides of Poland’s border with Kaliningrad will be hit economically because border traffic there drives local trade. Russians also shop in Polish cities like Warsaw or Krakow.

Over 65,000 Russians have crossed into Poland this year, similar to the same period last year but 10 times smaller than before the pandemic.

The Lithuanian Interior Ministry said 11 Russian citizens were stopped from entering that country starting at midnight. Most were trying to enter by land from Kaliningrad or from Belarus. No incidents were reported.

Estonia, a nation of 1.3 million, has registered hundreds of thousands of border crossings by Russian citizens since the start of Russia’s war on Ukraine.

The Baltic countries cannot, however, stop Russian citizens from entering via another Schengen nation. They want similar travel restrictions to be taken by all 27 EU member states.

The EU already has banned air travel from Russia after it invaded Ukraine. But before the ban, Russians could still travel by land to Estonia and apparently were then taking flights to other European destinations.

At a EU summit last month, the bloc’s 27 members were divided over whether to slap a broad visa ban on Russian citizens, torn between a desire to ramp up pressure on Russian President Vladimir Putin and concerns about punishing ordinary Russians who may not even support his war on Ukraine.

Czechia, which does not share a border with Russia, was one of the first EU countries to stop issuing visas to Russian citizens, approving the measure the day after Russia’s Feb. 24 invasion of Ukraine.

The three Baltic states were once republics in the Soviet Union, while Poland and Czechia — then part of Czechoslovakia — were Moscow’s satellites. That and earlier history makes them especially sensitive to Moscow’s aggression in Ukraine.