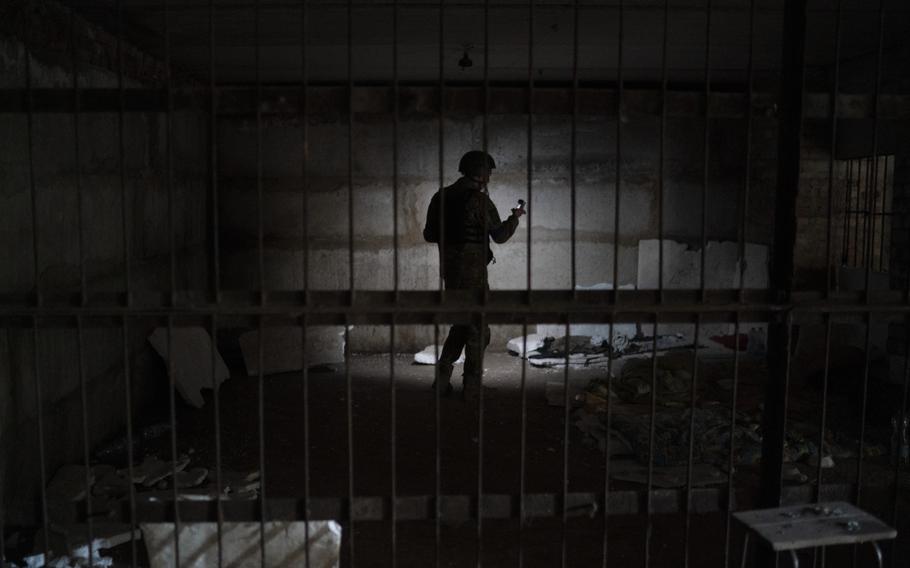 An Ukrainian serviceman stands in a basement which, according to Ukrainian authorities, was used as a torture cell during the Russian occupation, in the retaken village of Kozacha Lopan, Ukraine, Saturday, Sept. 17, 2022. (Leo Correa/AP)

KOZACHA LOPAN, Ukraine — In a dank basement behind the local supermarket, metal bars cordon off a corner of the room to form a large cell. A dirty sleeping bag and duvets show three sleeping spots on top of sheets of Styrofoam for insulation from the damp earth floor. In the corner, two black buckets served as toilets.

A few meters outside the barred cell, three dilapidated chairs stand around a table, cigarette butts and pumpkin seed husks littering the floor around them.

Ukrainian authorities say this was a makeshift prison where Russian forces abused detainees before Ukrainian troops swept through the border village of Kozacha Lopan in a major counteroffensive in the Kharkiv region this month. President Volodymyr Zelenskyy has said more than 10 such “torture chambers” have been discovered in the region since the hasty withdrawal of Russian troops last week. The claims of what occurred in the room could not be independently confirmed.

Kozacha Lopan, whose edge lies less than just over a mile from the Russian border, was retaken by Ukrainian forces Sept. 11.

In a statement posted Saturday on its Telegram channel, the prosecutor’s office of the Kharkiv region, in whose jurisdiction Kozacha Lopan lies, said the room seen by AP journalists was used as a torture cell during the occupation of the area. It said Russian forces had set up a local police force that ran the prison, adding that documents confirming the functioning of the police department and implements of torture had been seized. The statement said an investigation was being conducted.

Images the prosecutors released showed a Russian military TA-57 telephone with additional wires and alligator clips attached to it. Ukrainian officials have accused Russian forces of using the Soviet-era radio telephones as a power source to shock prisoners during interrogation.

In his nightly address to the nation Saturday, Zelenskyy mentioned another location, at the railway station in Kozacha Lopan, where he said “a room for torture and tools for electric torture was found.”

Viacheslav Zadorenko, head of the Derhachi municipality to which Kozacha Lopan belongs, pointed AP journalists on Sunday to a semi-basement of the train station, where he said interrogations had been carried out.

Members of Ukraine’s State Emergency Service, or DSNS, checked on Sunday for unexploded devices and booby traps but found none.

A sandbag barrier stood outside the stairs leading down into two small rooms. The first room was furnished with three tables and numerous stairs, a faded icon of the Virgin Mary on one table, two books on another, including a novel by Russian literary critic and philosopher Nikolay Gavrilovich Chernyshevsky.

Jumbles of wires and cables littered the floor, a small fridge stood in the corner. In a narrow adjoining room, a row of wooden cabinets stood open and mostly empty, and a mattress lay on the top bunk of a bunk-bed, a pair of discarded flip-flops and shoes on the floor.

It was impossible to independently confirm what occurred in the rooms.

Zadorenko, who is from Kozacha Lopan himself and whose mother stayed in the village during the fighting, said Russian forces tortured locals, and also limited the communications of those living there and took away their documents, including his own mother.

“She was unable to evacuate and leave, they knew she was my mother so they kept her. Some of the physical tortures were applied to her and she was under psychological pressure,” he said.

“People went through hard times, a lot of locals whose fate is unknown until today, lots of locals have died, lots of people were forcibly evacuated to the Russian federation,” he added.

Burial sites have been found in some areas where Russian forces were pushed out, most notably in the city of Izium, where Ukrainian officials say more than 440 graves have been found near the city’s cemetery. Zelenskyy has said they contain the bodies of civilian adults and children, as well as soldiers, showing signs of violent deaths, some possibly from torture.

Vitalii, a commander in the National Guard, said his team is hunting for graves of possible victims of abuse at the detention center in Kozacha Lopan. He asked to be identified by his first name only for security reasons.

The team is also recovering bodies on the battlefield, which are lying where they fell on farm fields or inside burned-out tanks. The Russian army was pushed back across the border into Russia after holding the area for months. But artillery shells still whistle through the air, fired from inside Russia and landing with resonating thumps and billows of black smoke on Ukrainian territory.

Despite the shelling, a small group of soldiers winds its way along a rutted mud track to where a dead Ukrainian combatant lies, spotted by a drone used to search for bodies and shallow graves.

“It’s a risk. We are always risking our lives and at any moment there might be some shell flying in from the territory of Russia,” Vitalii said.

The dead Ukrainian is lying on his back in body armor and helmet, a cap beneath it to block out the sun. The body has been there for a long time.

They document the scene and lift the remains into a body bag before heading farther along the track to a charred Russian tank. It takes only one of the team to carry away the body bag holding the remains of the Russian found inside.

Autopsies will follow, and the details of the sites recorded and passed on to investigators looking into potential war crimes, Vitalii said.

Throughout this border area, where fierce battles raged, villages bear the devastating scars of war: houses bombed and burned, roads pitted with bomb craters, smashed cars lying by the roadside.

Residents who fled during the height of the fighting have been returning to see what became of their homes.

Nothing is left of Alina Orobchenko’s home in the nearby village of Prudyanka but four broken, fire-blasted walls. The entire house in which she lived for 30 years was turned into a jumble of burnt, twisted rubble. Nothing was salvageable.

“It’s really hard to decide what to do next, it’s impossible to plan for the future,” the 47-year-old schoolteacher said as she picked her way over the smashed roofing tiles and piles of masonry.

“We’ve already cried out all our tears,” Orobchenko said. “But now we know we need to overcome this, and get on with our lives.”

Outside the blackened, smashed front windows, her pink and red roses have bloomed among the weeds and wreckage.