Short of soldiers to send to war, Russia’s mercenaries recruit in prisons 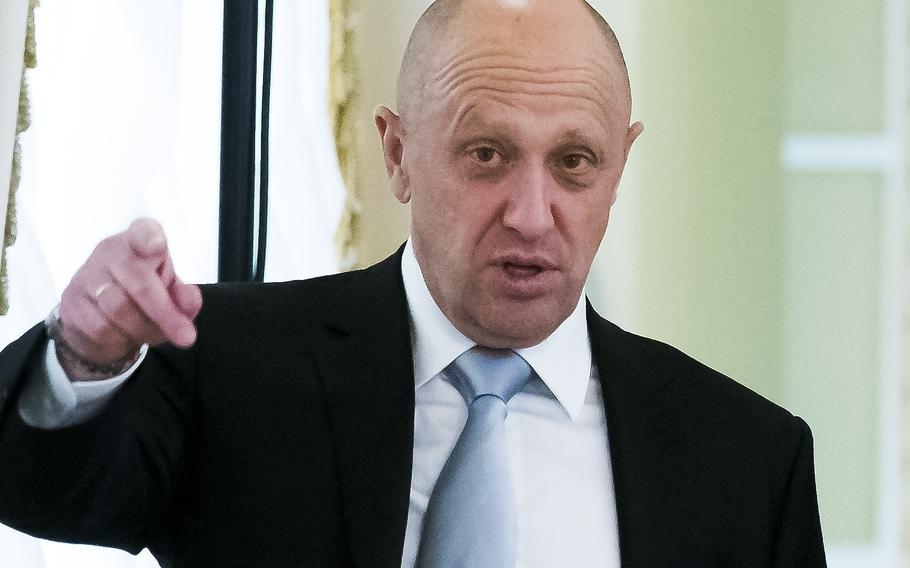 “After six months [at war] you receive a pardon, and there is no option for you to return to prison,” a man dressed in tan-colored fatigues said, addressing a crowd of Russian inmates standing underneath a poster that read “Choose life.” “Those who arrive [at the front line] and say on Day 1 it’s not for them get shot,” the man added. (Alexander Zemlianichenko/AP)

To address Russia’s shortage of soldiers to send to war in Ukraine, the Wagner mercenary group seems to be making an offer that it hopes convicted criminals can’t refuse: a get out of jail free card.

“After six months [at war] you receive a pardon, and there is no option for you to return to prison,” a man dressed in tan-colored fatigues said, addressing a crowd of Russian inmates standing underneath a poster that read “Choose life.” “Those who arrive [at the front line] and say on Day 1 it’s not for them get shot,” the man added.

The recording pitch, captured on video, surfaced Monday night on Russian Telegram channels, and the man in fatigues making the offer appears to be Yevgeniy Prigozhin, the billionaire nicknamed “Putin’s chef” who is also the reputed financier of Wagner private military company.

With Russian President Vladimir Putin refusing to declare a national draft, fearing such a move would be politically toxic, Wagner has been playing an increasingly crucial and public role in Russia’s invasion of Ukraine.

It is not clear when the video was filmed, but it appears to provide the first on-record evidence of a recruitment strategy that has been rumor for months: soliciting prisoners to trade prison garb for military uniforms as a way of replenishing Russia’s ranks on the battlefield.

Russia’s shortage of reinforcements was apparently part of the reason Moscow’s troops were unprepared for a Ukrainian counteroffensive in recent days that ousted Russian occupying fosters from most of the northeast Kharkiv region. The successful Ukrainian counteroffensive has only added to Russia’s woes, with some analysts saying Russia is no longer capable of offensive operations, but can only defend the territory it now controls.

Prigozhin, whose chef nickname comes from the lucrative catering contracts awarded to him by the Kremlin, for years has denied links to Wagner, despite mounting evidence that he is profiting from the deployment of mercenaries to the Middle East and Africa to surreptitiously promote Moscow’s agenda.

But in the video, he starts his pitch by saying openly that he represents Wagner and is looking for recruits as the war in Ukraine “is tough and doesn’t even compare to the Chechen wars or any others.”

Prigozhin’s catering company, Concord, coyly said in a Thursday statement that it “can confirm that the person in the video bears an enormous resemblance to Yevgeny Viktorovich [Prigozhin].”

“Judging by his rhetoric, he somehow deals with implementing the tasks of the special operation, and does so successfully . . . in addition, the person speaking in the video has a great delivery, just like Evgeny Viktorovich [Prigozhin] does,” the company said in its statement.

Another equivocate statement posted by Concord’s press service came from Prigozhin himself: “If I were a prisoner, I would dream of joining this friendly team in order to not only redeem my debt to the Motherland, but also to repay it with interest.”

“Those who do not want mercenaries or prisoners to fight . . . who do not like this topic, send your children to the front,” Prigozhin said. “It’s either them or your children, decide for yourself.”

Wagner has been leading a double effort to recruit men all over Russia in what the experts called “a shadow mobilization” as Putin has rebuffed calls for national mobilization from several hawkish Russian officials. Such a draft would almost certainly cause an uproar from the public that has been told for months that Moscow is running only a limited “special military operation” in Ukraine.

In addition to online ads and banners in dozens of cities inviting ordinary Russians to sign up, Wagner recruiters have been touring prisons seeking men between the ages of 22 and 50, but its recruiters say an exception is possible for older men if they are in a “good physical form.”

In the video, Prigozhin says the first batch of convicts fought in Ukraine on June 1 as Wagner was helping Russia take the Vuhlehirska power station in the Donetsk region. The mercenaries’ success in capturing the site was paraded on Russian state TV in the first public embrace of “the orchestra,” as the private army is often called, in reference to its namesake, right-wing German classical composer Richard Wagner.

“There were 40 people from St. Petersburg, [from a] high-security facility, recidivists,” Prigozhin said. “They entered the enemy trenches, cut them up with knives; there were three dead and seven wounded. Out of the three dead, one was 52 years old and had already served a 30-year-long sentence. He died a hero.”

Gulagu Net, a Russian human rights organization that helps convicts, first received calls and letters from inmates about Wagner’s recruitment efforts back in March. The head of Gulagu Net, Vladimir Osechkin, told The Washington Post in an interview last month that the effort was very limited at the time.

“Those were colonies for former law enforcement officers. . . . They were looking for those with combat experience, who took part in counterterrorism operations and various hostilities,” Osechkin said.

“We are talking special forces here, people who know what a weapon is,” he added. “They were told they would be commanders, that the motherland needs them, but as far as we understand, this campaign failed as they haven’t been able to recruit many of them.”

But as Russia’s campaign in Ukraine stalled since the initial gains in the spring, the effort to find fresh reinforcements took on new urgency.

“Starting in July, the number of calls we received grew exponentially, saying that Wagner has launched a mass recruitment campaign in regular colonies,” Osechkin said.

The enlistment approach was two-pronged: Some convicts were offered support roles, such as digging trenches and doing various construction work near separatist-controlled areas in the eastern Donbas region. Others were recruited for units of 12 people tasked with “special combat missions,” even though they often had little military training.

“It all points to the fact that the Russian army has a personnel shortage, and they are trying to replenish it using prisoners whom they don’t care about,” Osechkin said.

Another civil rights organization, Russia Behind Bars, which has long investigated horrific conditions in Russian prisons, estimated that approximately 7,000 to 10,000 convicts have already been sent to fight in Ukraine.

Both organizations have voiced concern that prisoners are being tricked into joining a potential suicide mission with no legal guarantees, as well as concern about releasing potentially violent convicted criminals serving decades-long sentences for murder or aggravated assault.

“In addition to it being immoral and very dangerous, it also means that the concept of ‘crime’ no longer exists in Russia; they wiped their feet on the judicial system,” the head of Russia Behind Bars, Olga Romanova, wrote in a Facebook post.

According to Gulagu Net, Putin awarded at least one Russian convict who fought in Ukraine with a medal of bravery: Ivan Neparatov, a member of an organized crime group who served 12 years out of his 25-year sentence for murder, robbery and kidnapping.

On the video, Prigozhin told the inmates of the penal colony, which The Post identified to be in the small Mari El republic in central Russia, that he was looking for the most brazen “stormtroopers,” willing to be thrown into hot spots as infantry.

“You have five minutes to make a decision,” he said. “Regarding trust and guarantees, do you have anyone who can get you out of prison alive? Allah and God can get you out [dead]. I am taking you out of here alive. But it’s not always that I bring you back alive.”