US hits more Russians with sanctions over Ukraine 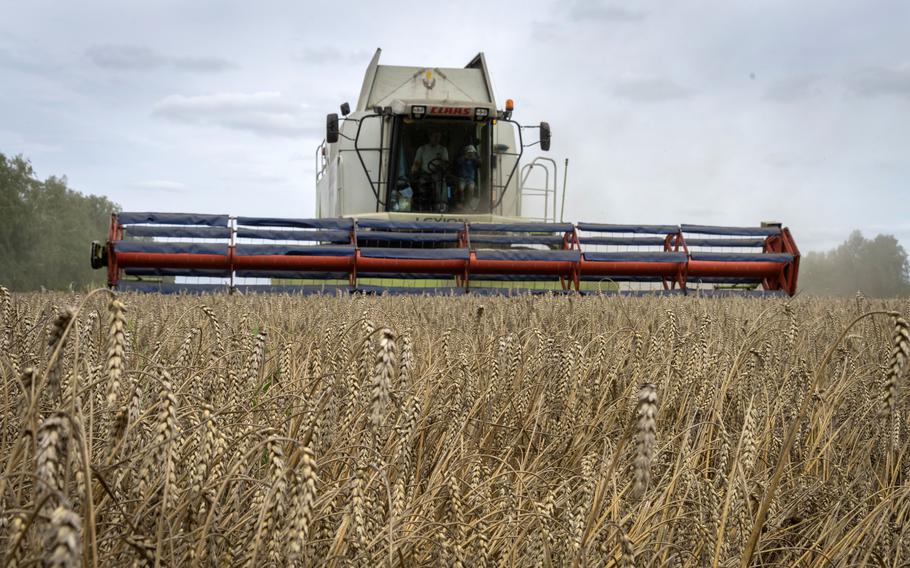 A harvester collects wheat in the village of Zghurivka, Ukraine, Aug. 9, 2022. The Biden administration Thursday, Sept. 15, 2022, slapped sanctions on dozens of Russian/AP officials and a number of Russian companies for human rights abuses and the theft of Ukrainian grain. (Efrem Lukatsky/AP)

WASHINGTON — The Biden administration on Thursday slapped sanctions on dozens of Russian and Ukrainian officials and a number of Russian companies for human rights abuses and the theft of Ukrainian grain.

The State Department said it had imposed sanctions on at least 23 officials and 31 Russian government agencies and firms for their roles in supporting Russia's war in Ukraine. Some, but not all, of those penalized were already subject to U.S. sanctions, which include asset freezes and a ban on Americans conducting business with them.

"Those designated today — from perpetrators of violence to an official facilitating the purposeful removal of children from Ukraine — provide examples of the behavior that has become synonymous with the Government of Russia's unprovoked war," Secretary of State Antony Blinken said.

"The United States will continue to take actions against those who support Russia's defense-industrial base, its violation of human rights, and its attempts to legitimize its occupation of Ukrainian territory, wherever they may be," he said in a statement.

Among those targeted on Thursday include 17 Russian and Ukrainian officials who were said to be working for, or on behalf of, the Russian government to destabilize Ukraine. Another five people were sanctioned for participating in the alleged theft of Ukrainian grain. Many of them were appointed by Russia to local leadership positions in parts of Russian-occupied Ukraine.

Among the government agencies and companies hit with sanctions were Russia's Main Intelligence Directorate, or GRU, which has been subject to U.S. penalties since 2016, but has since been accused of running so-called "filtration" camps through which Ukrainians have been forcibly deported.

Other companies include high-tech firms involved in Russia's space and satellite sectors and computer companies that produce micro-processors and semiconductors used by the Russian armed forces.