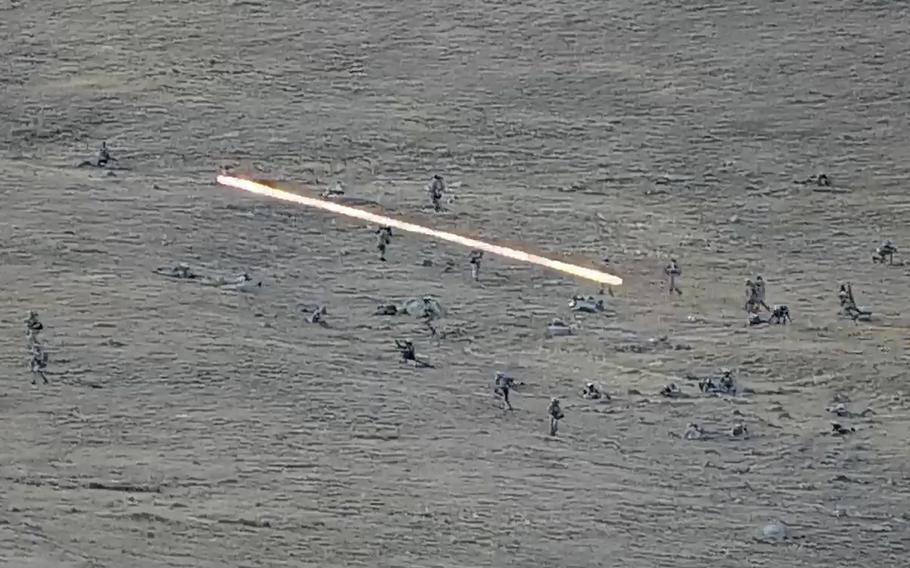 YEREVAN, Armenia — Armenia and Azerbaijan accused each other of instigating new rounds of shelling Wednesday across their borders as hostilities reignited between the two longtime adversaries.

The Azerbaijani military, in turn, charged that Armenian forces shelled its positions in the Kalbajar and Lachin districts of Azerbaijan, near the separatist Nagorno-Karabakh region.

Armenia said at least 49 of its soldiers have been killed since fighting erupted early Tuesday, while Azerbaijan said it lost 50 troops.

The two ex-Soviet countries have been locked in a decades-old conflict over Nagorno-Karabakh, which is part of Azerbaijan but has been under the control of ethnic Armenian forces backed by Armenia since a separatist war there ended in 1994.

During a six-week war in 2020, Azerbaijan reclaimed broad swaths of Nagorno-Karabakh and adjacent territories held by Armenian forces. More than 6,700 people died in the fighting, which ended with a Russia-brokered peace deal. Moscow deployed about 2,000 troops to the region to serve as peacekeepers under the deal.

Russia moved quickly on Tuesday to negotiate an end to the latest hostilities, but a cease-fire it sought to broker has failed to hold. The two sides traded blame for violations of the cease-fire, while the international community urged calm.

"Despite the appeals of the international community and the reached cease-fire agreement, Armenian armed forces continue attacks and provocations in the state border using artillery and other heavy weapons," Azerbaijan's Defense Ministry said in a statement on Wednesday.

It said two Azerbaijani civilians were injured by the Armenian shelling of the Kalbajar and Lachin districts.

Armenian Prime Minister Nikol Pashinyan said Wednesday that his government has asked Russia for military support under a friendship treaty between the countries, and also requested assistance from the Collective Security Treaty Organization (CSTO), a Moscow-dominated security alliance of ex-Soviet nations.

"We don't see a military interference as the only possibility, because there are also political and diplomatic options," Pashinyan said, speaking in his nation's parliament.

Moscow has engaged in a delicate balancing act in seeking to maintain friendly ties with both nations. It has strong economic and security ties with Armenia, which hosts a Russian military base, while also has been developing close cooperation with oil-rich Azerbaijan.

Some observers saw the outbreak of fighting as an attempt by Azerbaijan to force Armenian authorities into faster implementation of some of the provisions of the 2020 peace deal, such as the opening of transport corridors via its territory.

"Azerbaijan has bigger military potential, and so it tries to dictate its conditions to Armenia and use force to push for diplomatic decisions it wants," Sergei Markedonov, a Russian expert on the South Caucasus region, wrote in a commentary.

Markedonov noted that the current flare-up of hostilities comes just as Russia has been forced to pull back from areas in northeastern Ukraine after a Ukrainian counteroffensive, adding that Armenia's request for assistance has put Russia in a precarious position.

Russian President Vladimir Putin and leaders of other CSTO members discussed the situation in a call late Tuesday, urging a quick cessation of hostilities. They agreed to send a mission of top officials from the security alliance to the area.

Kremlin spokesman Dmitry Peskov said that the mission will deliver a report assessing the developments to the leaders of CSTO member states. "The situation has remained tense," Peskov said in Wednesday's conference call with reporters.

On Friday, Putin is set to hold a meeting with Azerbaijani President Ilham Aliyev in Samarkand, Uzbekistan, where they both plan to attend a summit of the Shanghai Cooperation Organization, a security grouping dominated by Russia and China.

Aida Sultanova in London and Vladimir Isachenkov in Moscow contributed to this report.