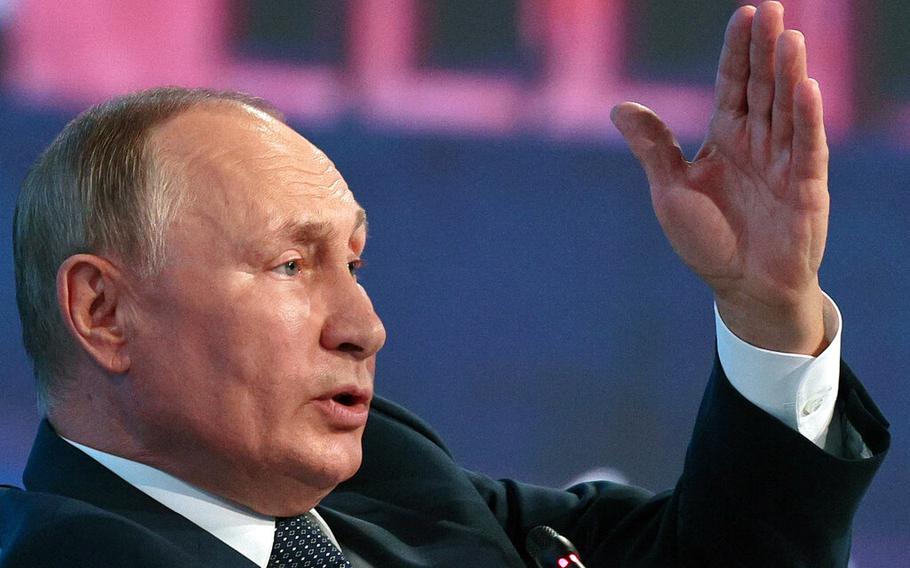 Russian President Vladimir Putin on Wednesday called Western sanctions "stupid" and threatened to halt all energy sales to Russia's critics if they move forward with a cap on oil prices proposed by the Group of Seven industrialized economic powers.

"We will not supply gas, oil, coal, heating oil - we will not supply anything," Putin said, in a defiant speech at the plenary session of the Eastern Economic Forum, which was being held in the city of Vladivostok in Russia's Far East. Putin added that Moscow will let "the wolf's tail freeze" in reference to a famous Russian fairy tale.

But in the West's own defiant rejoinder, European Commission President Ursula von der Leyen on Wednesday reiterated that the European Union intends to break Russia's grip on global energy markets and would press ahead with not only the cap on oil prices but on gas prices as well.

"Not only because Russia is an unreliable supplier, as we have witnessed in the last days, weeks, months, but also because Russia is actively manipulating the gas market," von der Leyen told reporters in Brussels. "I am deeply convinced that with our unity, our determination, our solidarity, we will prevail."

In his combative, at times scornful, remarks, Putin said he expects his country to emerge stronger from the war in Ukraine, and he issued threats meant to pressure the West to ease sanctions imposed on Russia since the invasion began Feb. 24.

"I'm sure we have not lost anything and will not lose anything," Putin said. "The main thing is strengthening our sovereignty, and this is the inevitable result of what is happening now."

Putin declared Russia would press on with its military action in Ukraine and said "the polarization" the conflict had evoked would only benefit Russia as it cleanses "harmful" elements inside the country.

Western intelligence agencies estimate that Russia lost tens of thousands of soldiers in the six months of the war and a vast amount of military equipment that the country is struggling to replace. The Russian campaign has stalled in recent weeks, and Ukraine, though still heavily outmatched, is mounting a counteroffensive in the south aimed at recapturing occupied territory.

As punishment for the Russian invasion, which initially sought - and failed - to capture Kyiv, the capital, and topple the government of President Volodymyr Zelensky, Western powers have imposed an extraordinary barrage of economic sanctions and export control measures aimed at crippling Russia's economy. But the results have fallen short of expectation as energy prices soared and Russia redirected sales of gas and oil to Asia.

Speaking on Wednesday, Putin called the price caps on oil and gas proposed by G-7 "stupid" and portended they would only further destabilize Europe's own economy. He also threatened that Russia would walk away from the existing supply contracts if the caps took effect.

"Will there be any political decisions that contradict the contracts? Yes, we won't fulfill them. We will not supply anything at all if it contradicts our interests," Putin said, underscoring Moscow's turn toward Asian markets.

On Friday, Gazprom, the Russian state-owned gas behemoth that operates critical pipelines supplying Europe, indefinitely halted the flow to Germany through the Nord Stream 1 pipeline, which accounted for about 35 percent of all European gas imports from Russia last year.

In a further ominous development, Russian officials and pro-Kremlin Telegram channels this week have widely shared a video purportedly showing Europe freezing in winter. The clip shows a Gazprom employee walking toward a turned-off gas valve, followed by scenes of a snowed-covered city. Online sleuths identified the frozen city as Krasnoyarsk in Siberia, which does not use natural gas but suffers from air pollution as a result of coal-fired power plants.

In his speech, Putin rejected the E.U. accusation that Russia was using energy as a weapon and reiterated Russia's prior assertion that technical problems caused the pipe to break down, complaining that the West was not providing a crucially needed turbine to repair it.

"Nord Steam 1 is practically closed now," Putin said Wednesday. "There is an oil leak there - it's a possibly explosive situation, a fire hazard. . . . Give us a turbine, and we will turn on Nord Stream 1 tomorrow. But they don't give us anything."

Putin, however, craftily offered that Moscow was ready to "press the button" and pump gas "as early as tomorrow" through the Nord Stream 2 pipeline, which Germany has blocked from beginning operation much to the Kremlin's fury.

The Russian leader also dangled restrictions on another crucial European import over which Moscow has leverage: grain.

Putin claimed that most of the grain recently released from the Ukrainian ports thanks to a Turkey-brokered deal to end a Russian blockade was going to the European Union instead of developing nations.

Accusing the West of "colonial" behavior, Putin said grain shipments to Europe should be cut off.

"Once again, they simply deceived the developing countries and continue to deceive them. . . . With this approach, the scale of food problems in the world will only grow," Putin said. "Maybe we should think about restricting that route for grain and trade food? I'll definitely consult with the Turkish president."

Putin scoffed at suggestions that the impact of Western sanctions would devastate the Russian economy, noting that it would contract only by "around 2 percent or a little more" and that Russia's 2022 budget would be in surplus.

"Russia is coping with the economic, financial and technological aggression of the West," Putin said. "We have passed the peak of the most difficulties, and the situation is normalizing."

These assessments contradicted Russian policymakers at the Russian Central Bank and the Ministry of Economic Development, which recently said that while the economy has held up better than expected so far, 2023 could be far more challenging as the effects of more sanctions are felt.

"No matter how much someone wants to isolate Russia, it is impossible to do," Putin said. "You just need to look at the map."

At Wednesday's plenary, Putin sat next to Myanmar's junta leader, Min Aung Hlaing, who has been sanctioned by the United States for human rights violations.

In August, Myanmar announced it planned to import oil from Russia, and this week Min Aung Hlaing told Putin that the country was prepared to pay for the imports in Russian rubles, aiding Russia's goal of detaching itself from the U.S. dollar.

China's top legislator, Li Zhanshu, and high-ranking officials from Armenia and Mongolia also attended the forum. Russia's ambassador to Beijing, Andrey Denisov, announced Wednesday that Putin was set to meet Chinese President Xi Jinping on the sidelines of a summit in Uzbekistan next week, in their first face-to-face encounter since the invasion of Ukraine.