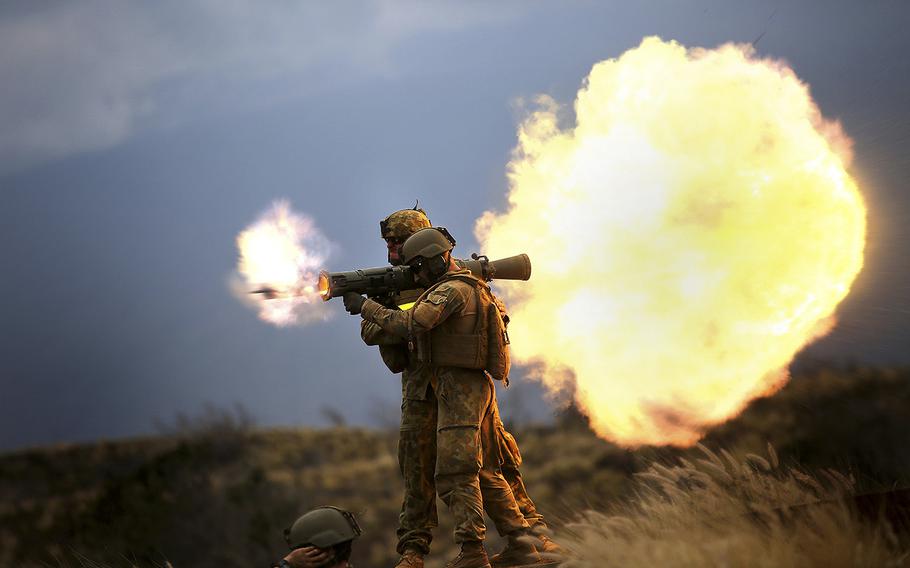 A Carl Gustav recoilless rifle is fired during training in 2014. The U.S. is providing Ukraine with 2,000 rounds for the weapon. (Matthew Callahan/U.S. Marine Corps)

All is not quiet on the southeastern front. This week, reports suggested Ukraine may have launched its long-mooted counteroffensive against Russian forces encamped in the southern Kherson region, which abuts the Russian-controlled Crimean peninsula. There are also rumored new pushes to take back territory in the eastern Donbas region as well as areas near Kharkiv in the north. "We will oust them to our border," declared Ukrainian President Volodymyr Zelenskyy in a speech Monday. "It is time for the Russian military to flee."

The fog of war makes it hard to discern whether Russian forces are losing ground. Authorities in Kyiv placed strict restrictions on access to journalists covering the war's shifting fronts. A spokesperson for Ukraine's southern command told reporters Monday that "we can confirm that we have broken through the first line of defense" in three areas in the Kherson region. But the fighting appears to have bogged down along a reported second line of defense, where Russian forces are more entrenched.

In the weeks prior, there had been a steady drumbeat of reports of Ukrainian partisans and special forces launching clandestine attacks behind enemy lines, including the alleged assassinations of collaborators with Russian occupation forces in Kherson. Long-range Ukrainian artillery strikes have targeted strategic bridges, Russian ammunition depots, military bases and logistical hubs, reaching perhaps as far as Crimea, which Russia annexed in 2014.

Pentagon officials this week acknowledged an "uptick" in clashes, but refrained from confirming whether a major offensive was underway. Britain's Defense Ministry said several Ukrainian brigades had escalated their artillery fire across southern Ukraine, while also noting that Russian units around Kherson "are likely undermanned and are reliant upon fragile supply lines." Russian officials, for their part, said their forces have exacted a heavy toll on Ukrainian troops, tanks and military equipment.

The battles for Kherson mark a crucial stage of the overall war effort. "Ukraine hopes that retaking the region from the Russians - who were reportedly planning to stage a referendum in advance of annexing it as part of Russia - will swing momentum its way in what has become a stalemated war," my Washington Post colleagues Steve Hendrix and Serhii Korolchuk reported Thursday following a trip near the region's front lines.

According to CNN, U.S. officials advised Ukrainian counterparts to limit the scope of their ambitions. "Those discussions involved engaging in 'war-gaming' with Kyiv . . . analytical exercises that were intended to help the Ukrainian forces understand what force levels they would need to muster to be successful in different scenarios," reported CNN's Katie Bo Lillis and Natasha Bertrand. "The Ukrainians were initially considering a broader counteroffensive, but narrowed their mission to the south, in the Kherson region, in recent weeks."

The resulting campaign may be slow going and attritional. "It's going to take as long as needed and nobody is going to rush it because people expect something dramatic and exciting," Andriy Zagorodnyuk, a former Ukrainian defense minister who now runs the Center for Defense Strategies, a military think tank in Kyiv, told my colleagues. "They're going to be doing it safely, whatever time it takes."

U.S. officials believe that months of deliveries of military aid to Ukraine have helped put them on a more level tactical footing with the Russians. That's particularly true in light of the evolving artillery war. "A powerful M777 howitzer is firing nearby, and at night we hear a High Mobility Artillery Rocket System (HIMARS) firing its long-range munitions," reported the BBC's Quentin Sommerville in an evocative dispatch from the front lines published this week. "These new weapons helped prepare the ground for the offensive in the south, and it is hoped they will do the same in the east."

"The Russian military is disoriented because of the pounding they've received," wrote Washington Post columnist David Ignatius, citing U.S. officials. "Analysts estimate that Russia has lost thousands of officers, including hundreds of colonels and dozens of generals. The relentless attacks have forced Russian commanders to keep moving headquarters posts, adding to their command and logistical problems."

Ukrainian officials talk up the prospect of a decisive victory but stress that their priorities are more immediate and limited. "We are concentrated right now on survival," Oleksiy Chernyshov, Ukraine's minister for communities and territories development, told me. Chernyshov was in Washington for meetings with the Biden administration and representatives of major international financial institutions headquartered in the U.S. capital.

Ukraine has vast needs for aid on numerous fronts beyond the war effort: It requires assistance securing additional flows of natural gas as winter approaches and Russia threatens pipelines and continues to damage critical infrastructure. It is hoping to secure billions of dollars in funding from the international community to help in the restoration of what Chernyshov labeled the "de-occupied territories" - areas captured and ravaged by Russian troops in earlier stages of the war and since reclaimed by Kyiv.

And Ukrainian officials have already outlined to Western counterparts their vision for a mammoth project of reconstruction - likened by many to a new "Marshall plan" - that would see some $350 billion pumped into the country after the war is over.

Chernyshov said the war has shown the importance of a series of political reforms that started in 2014 to decentralize authority in the country further away from Kyiv, which, he believes, buttressed Ukrainian "resilience" in the face of Russian invasion. "We all have witnessed that Ukraine is absolutely united, regardless of territories, languages and other regional aspects," he said.

Now, Ukraine's government hopes to press forward. On a tablet, Chernyshov showed me a map of the country, with regions shaded in different colors to illustrate the reach of Russian control and devastation. The country's west, centered around the city of Lviv, has been more shielded from Russian attack and was colored yellow.

"Our task is to have this yellow color for the whole territory," Chernyshov said - waving his hand over the map of Ukraine, before pointing in particular to Crimea - "including this one."