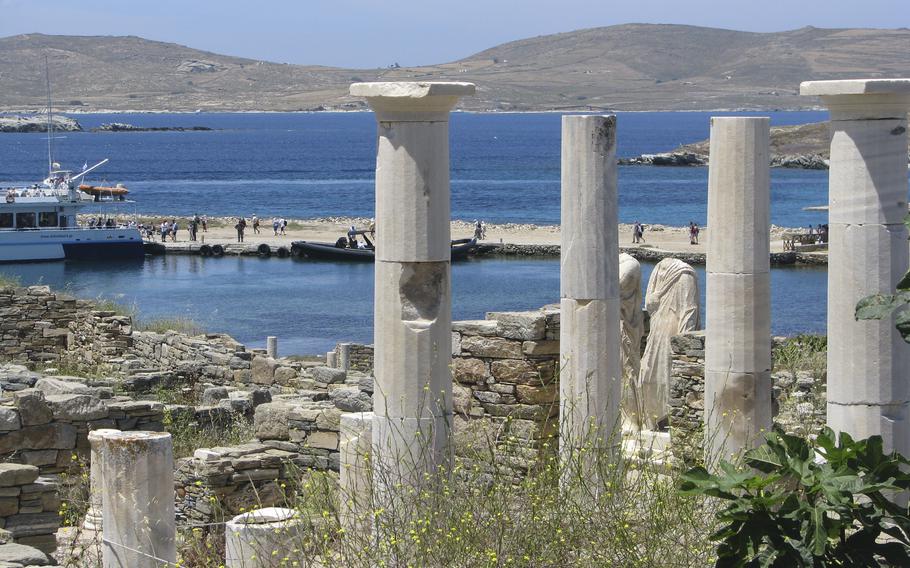 Ancient statues and columns from a millennia-old house stand just above the landing dock in the archaeological park at Delos, Greece, on May 25, 2019. The tiny island, a short boat ride from party-central Mykonos, was considered holy by ancient Greeks. (Giovanna Dell’Orto/AP)

ATHENS, Greece — The head of Greece’s intelligence service and the general secretary of Prime Minister Kyriakos Mitsotakis’ office have resigned amid a scandal involving the targeting of the head of an opposition party and a journalist with spyware.

The prime minister’s office did not give a reason for Dimitriadis’ resignation. A government official said it was “related to the toxic climate that has developed around him. In no case does it have anything to do with Predator (spyware), to which neither he nor the government are in any way connected, as has been categorically stated.” The official spoke on condition of anonymity as the reasons for the resignation had not been announced.

Last week, the head of Greece’s socialist PASOK opposition party, Nikos Androulakis, filed a complaint with the country’s supreme court prosecutors saying there had been an attempt to bug his cellphone with the Predator spyware.

“I never expected the Greek government to put me under surveillance with the darkest practices,” Androulakis said, following the resignations on Friday.

He also called on parliament to set up an investigative committee to look into potential political responsibilities for the attempted tapping of his phone. Government spokesman Yannis Oikonomou said that if such a request were to be formally submitted, “the government will respond positively.”

In a Friday evening statement, Oikonomou said the center-right government had sought to “fully brief” Androulakis “as soon as the case of legal surveillance, following the approval of the prosecuting authority, for Mr. Androulakis came to the prime minister’s attention.” However, he said, Androulakis “chose not to respond.”

Oikonomou did not say when Mitsotakis became aware of the “legal surveillance” of the opposition party head, but the government official, who spoke on condition of anonymity said it was on Thursday.

“Revealing who is behind such sick practices and for whom they are acting is not a personal matter. It is my democratic duty,” Androulakis had said at the time.

In April, Greek financial journalist Thanassis Koukakis said he had been notified by digital rights group Citizen Lab that his phone had been the target of surveillance by Predator software from July to September 2021. The Committee to Protect Journalists had called for a “swift and thorough investigation ... (to) determine who orchestrated that monitoring, and hold them to account.”