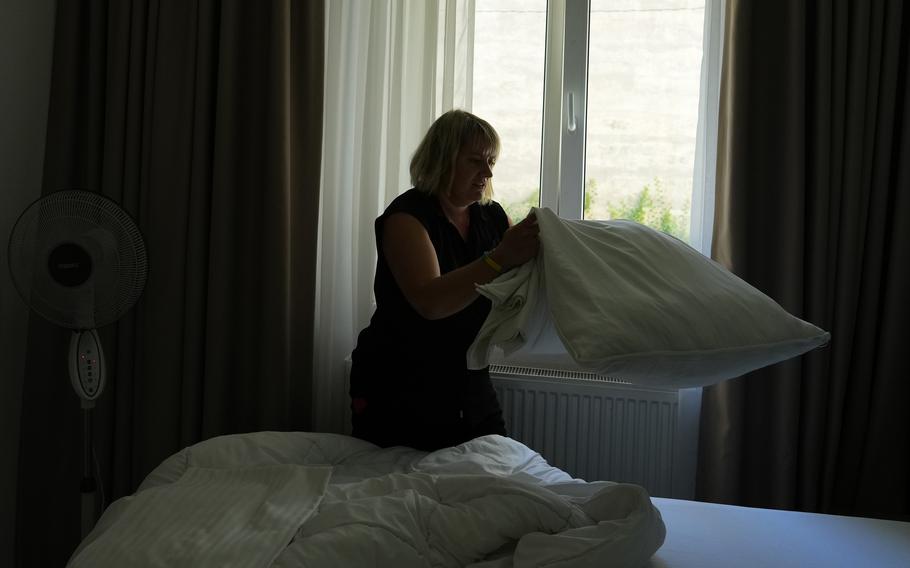 Ukrainian refugee Liudmyla Chudyjovych makes up a room in a hotel where she works, Wednesday, Aug. 3, 2022, in Prague, Czech Republic. Nearly six months after the Russian invasion of Ukraine, many refugees are still struggling to find jobs in their European Union host countries, despite the EU's streamlined process for Ukrainians to live and work in any of its 27 member nations. (Petr David Josek/AP)

PRAGUE — Liudmyla Chudyjovych used to have a career as a lawyer in Ukraine and big plans for the future. That was before the Russian invasion forced the 41-year-old woman to put her daughter's safety first, and leave both her job and home behind.

Since fleeing the town of Stryj in western Ukraine in May, Chudyjovych has found a new job in the Czech Republic. But instead of practicing law, she's had to settle for work as a housekeeper at a hotel in the capital, Prague.

"It's just a different stage of my career," she said. "That's simply how it is."

One of the millions of refugees who have fled Ukraine since the Feb. 24 Russian invasion, Chudyjovych considers herself lucky to have a job at all. Not fluent enough in either Czech or English, Chudyjovych said she didn't mind the work as long as she and her daughter are safe.

Although the European Union introduced regulations early in the war to make it easier for Ukrainian refugees to live and work in its 27 member nations while they decide whether to seek asylum or return home, many are only now starting to find jobs — and many are still struggling.

Some 6.5 million Ukrainians, have entered the EU since February, according to Frontex, the EU Border and Coast Guard Agency, streaming into neighboring countries before many moved on to more prosperous nations in the West. Around half have since returned to Ukraine.

Only a relatively small number of those who stayed had entered the EU labor market by mid-June, according to the European Commission.

A recent Organization for Economic Cooperation and Development report looking at the potential impact Ukrainian refugees will have on the EU workforce projected it will be about twice as large as the 2014-2017 inflow of refugees, which included many fleeing war in Syria.

The study estimated the Czech Republic, which has the lowest unemployment rate in Europe, would add the most Ukrainians to its workforce by the end of the year, with an increase of 2.2%, followed by Poland and Estonia. About 1.2 million workers would be added to the European workforce overall, mainly in service occupations, the report said.

Still, the influx is unlikely to drive down wages or boost unemployment in European countries, many of which face labor shortages due in part to their aging populations.

"Considering the labor needs of the main host countries, a negative impact in terms of employment or wages for the resident population ... seems very unlikely," the report concluded.

The EU effort to help the Ukrainians has won praise from the U.N. Refugee Agency and other rights groups dealing with migration. But they also note a major difference in the treatment of people fleeing wars or poverty in the Middle East, Africa or Asia, who often have to wait years before overcoming the hurdles for acquiring residency papers or work permits.

Still, there are many challenges ahead for Ukrainian refugees looking for work.

In addition to language barriers, skilled workers from Ukraine often lack documentation to prove their professional credentials to get better-paid employment. Their diplomas may not be recognized in their host countries, meaning many have to take language and training courses before they can seek professional opportunities.

Because men between the ages of 18 and 60 are banned from leaving Ukraine, many refugees are women with children, which can be an additional obstacle for trying to find work. Many women are still weighing their options and might decide to return home for the start of the school year in September, officials say, despite the war being far from over.

In Poland, which has taken in about 1 million Ukrainian refugees, more than any other EU nation, just over a third have found work, according to the Polish minister of labor and social policy, Marlena Malag. Some have gotten jobs as nurses or Ukrainian language teachers in Polish schools, while others are working as housekeepers or waitresses.

In Portugal, some of the country's largest companies have special job recruitment programs for Ukrainians, while the Institute for Employment and Professional Training offers free Portuguese language classes.

In Germany, about half of some 900,000 Ukrainian refugees have registered with the country's employment agency, though no figures are available on how many have actually found jobs. The Mediendienst Integration group, which tracks migration in Germany, says about half have university degrees, but doesn't specify how many have been able to work in their professional fields.

Natalia Borysova was chief editor of a morning TV show in the western Ukrainian city of Lviv before fleeing with her daughters, 11 and 13, in March, and settling in the German city of Cologne. She applied for low-paying jobs such as housekeeping, but ultimately decided to turn them down to focus on learning German.

"I'm an optimist and I am sure that I will find a job after learning the language," the 41-year-old said via WhatsApp. "Perhaps on a different level than in Ukraine, but in the same field. Now it just doesn't make sense for me to work for the minimum wage."

Borysova, like other Ukrainian refugees, receives an allowance from the German government that helps the family pay for food and housing, but said she wants to return to work as soon as she masters German.

Chudyjovych is among some 400,000 Ukrainians in the Czech Republic who have registered for special long-term visas that grant access to jobs, health care, education and other benefits. Nearly 80,000 have already found work, the government said.

At the Background café in Prague's Old Town, 15 Ukrainian refugees work with the Czech staff as part of a project sponsored by the Mama Coffee chain. The refugees also receive free language classes and other programs.

Lisa Himich, 22, from Kyiv, likes it and says "it feels like home here."

For Chudyjovych, working as a housekeeper is far better than living in fear and under the constant sound of air raid sirens.

"I thought I would miss Ukraine and be homesick but that hasn't happened at all," Chudyjovych said. "It's peaceful here and I feel like a human being."