Ukraine urges Lebanon to block ship with grain from leaving 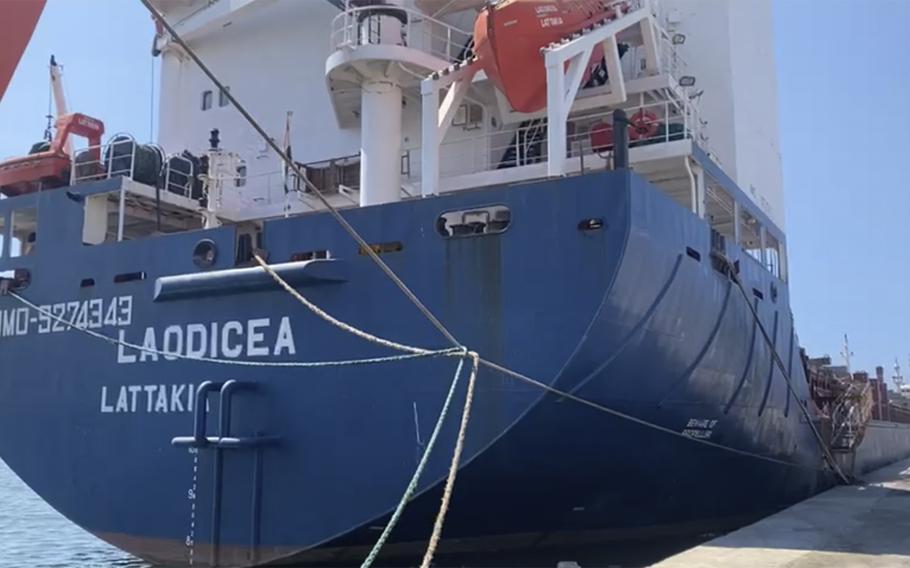 This frame grab from a video, shows a Syrian cargo ship Laodicea docked at a seaport, July 29, 2022, in Tripoli, north Lebanon. The office of Lebanon’s prosecutor general Tuesday, Aug. 1, 2022, allowed a Syrian ship said to be carrying Ukrainian grain stolen by Russia to leave a port in the country’s north, officials said, after an investigation showed it was not carrying stolen goods. However, the ship Laodicea cannot leave the port of Tripoli because a judge ordered Monday that it may not sail for 72 hours at the request Ukrainian authorities. (AP)

BEIRUT — Ukraine's ambassador to Lebanon on Wednesday insisted a Syrian ship docked at a Lebanese port is carrying stolen Ukrainian grain and urged Lebanon to block the vessel from leaving.

The Syrian-flagged Laodicea has been anchored at the port of Tripoli since it arrived last Thursday, carrying 10,000 tons of wheat flour and barley. Ukraine says the grain was stolen by Russia.

Ukrainian Ambassador to Lebanon Ihor Ostash urged Lebanon not to allow the vessel to leave the port.

The U.S. Treasury Department sanctioned the ship in 2015 for its affiliation with the Syrian government of President Bashar Assad, a close political and military ally to Moscow.

A senior Lebanese customs official said Friday that Ukraine's claims that the ship contained stolen goods were untrue and that the vessel's papers appeared in order following an inspection.

Lebanon, already in the throes of a crippling economic and political crisis, has found itself entangled in the fallout from Russia's war in Ukraine. A judge on Monday ordered the Laodicea not to set sail for 72 hours, following a request from Kyiv. However, Lebanon's prosecutor general the following day decided the ship could set sail.

The judge on Wednesday then ordered the ship released following the prosecutor's decision, judicial officials said on condition of anonymity because they were not authorized to speak to the media. It was not immediately clear if the ship would sail from Tripoli on Thursday.

The Laodicea is now free to go but that will likely anger Ukraine. Russia's diplomatic mission in Lebanon praised the move, accusing Ukraine of lying about the cargo and trying to damage relations between Moscow and Beirut.

Ostash at a news conference Wednesday presented documents and mapping of the Laodicea's journey and cargo. He said that evidence from Kyiv's security agencies and judiciary indicates the vessel contained stolen goods.

"Of course it's important to understand that we would like to go via legal procedures to ... provide all possible evidences and proofs of the Ukrainian side," Ostash said. He presented a photo of what appears to be the Laodicea being loaded with the cargo in the Russia-annexed Crimea peninsula.

The ongoing fuss over the Laodicea comes as the first grain ship carrying 26,000 tons of Ukrainian corn aboard the Sierra Leone-flagged Razoni entered Turkey's Bosporus Strait en route to the Tripoli port in Lebanon. It's the first grain ship heading from the war-torn country since Russia's invasion in late February.

A Lebanese official told The Associated Press on Wednesday that the ship is expected to take about four days to arrive in Lebanon from Istanbul after it was searched.

After presenting Kyiv's latest evidence about the Laodicea, Ostash turned to the Razoni, which he said unlike the Syrian ship carried "in a legal way, not stolen, original Ukrainian grain."

Lebanon condemned Russia's invasion of Ukraine in February, which angered Moscow and its allies in Beirut. Ostash praised Lebanon again for taking this position.

The shipments come at a time when Lebanon is suffering from a food security crisis, with soaring food inflation, wheat shortages and breadlines. Three-quarters of its population lives in poverty.