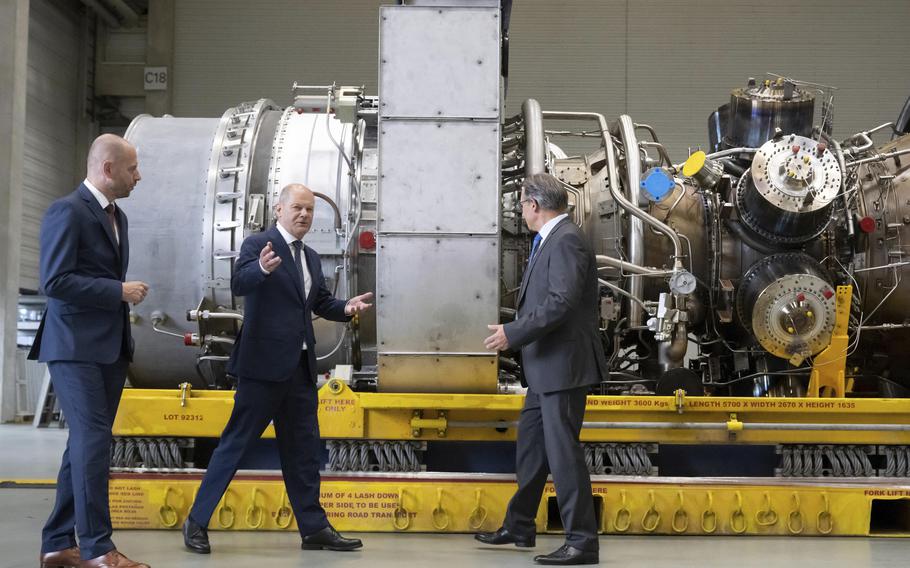 BERLIN — German Chancellor Olaf Scholz inspected a mechanical turbine at the center of a natural gas dispute and declared Wednesday “there are no problems” with the part besides information from Russia’s state-controlled gas company.

Russian energy giant Gazprom last week halved the amount of natural gas flowing through the Nord Stream 1 pipeline to 20% of capacity, citing delays with the turbine’s repair and delivery. But Scholz insisted the needed part is ready to be shipped to Russia at any time.

German partner Siemens Energy earlier this year sent the turbine to Canada for an overhaul. The German government says the finished piece was meant to be installed in September and alleges that Moscow is using misleading technical explanations in a political ploy and to push up gas prices.

The turbine is now stored at a Siemens Energy facility in Germany’s western city of Mulheim an der Ruhr.

“This thing is perfect. Its installation can be done immediately,” Scholz said while standing in front of the large piece of machinery. “It is here. It’s ready to go. And by the way, in the world we live in today, it’s a very simple thing to transport it. It’s just a matter of saying, ‘Please send it.’”

“This turbine is usable any time,” he said. “There is nothing standing in the way of its transport on to Russia — other than that the Russian recipients have to say that they want to have the turbine, and give the necessary information for the customs transport to Russia,” the chancellor continued. “All other permits are there — that goes for the permit from Germany, the permit from the European Union, from the United Kingdom, from Canada. There are no problems.”

Gazprom has repeatedly said it pressed Siemens Energy for documents and clarification, and said a week ago that it wasn’t satisfied with documents it had received.

Gazprom’s repeated reductions of gas deliveries has raised fears that Russia may cut off supplies to try to gain political leverage over Europe, which has imposed wide-ranging sanctions against Russia over the war in Ukraine.

Scholz noted the EU sanctions do not apply to the gas used to power industry, heat homes and generate electricity.