Ukraine seeks to retake the south, tying down Russian forces 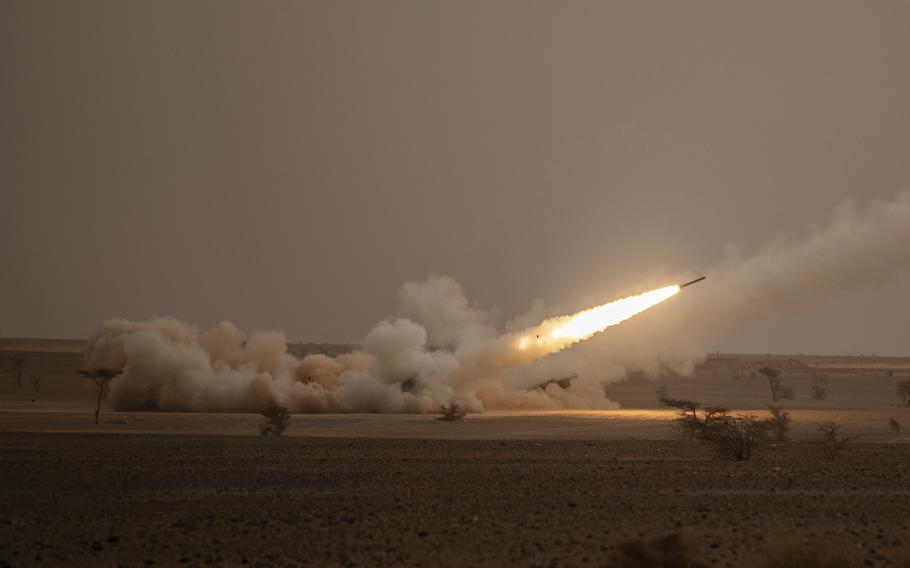 A launch truck fires the High Mobility Artillery Rocket System (HIMARS) at its intended target during the African Lion military exercise in Grier Labouihi complex, southern Morocco, on June 9, 2021. Ukraine has received about a dozen American-built HIMARS multiple rocket launchers and has used them to strike Russian ammunition depots, which are essential for maintaining Moscow's edge in firepower. (Mosa'ab Elshamy/AP)

Even as Moscow’s war machine crawls across Ukraine’s east, trying to achieve the Kremlin’s goal of securing full control over the country’s industrial heartland, Ukrainian forces are scaling up attacks to reclaim territory in the Russian-occupied south.

The Ukrainians have used American-supplied rocket launchers to strike bridges and military infrastructure in the south, forcing Russia to divert its forces from the Donbas in the east to counter the new threat.

With the war in Ukraine now in its sixth month, the coming weeks may prove decisive.

While the bulk of Russian and Ukrainian military assets are conсentrated in the Donbas, the industrial region of mines and factories, both sides hope to make gains elsewhere.

Ukraine has vowed to drive the Russians from the territory they have seized since the start of the invasion, including the southern region of Kherson and part of the Zaporizhzhia region, while Moscow has pledged to hold on to the occupied areas and take more ground around the country.

The Donbas consists of Luhansk province, now fully controlled by Russia, and Donetsk province, about half of which is in Moscow’s hands.

Ukrainian military analyst Oleh Zhdanov noted that by stepping up the attacks in the south, Kyiv has forced Russia to spread its forces.

“The Russian military command has been put before a dilemma: to try to press the offensive in the Donetsk region or build up defenses in the south,” Zhdanov said. “It’s going to be difficult for them to perform both tasks simultaneously for a long time.”

He noted that rather than trying to mount a massive, all-out counteroffensive, the Ukrainians have sought to undermine the Russian military in the south with a series of strikes on its munitions and fuel depots and other key sites. 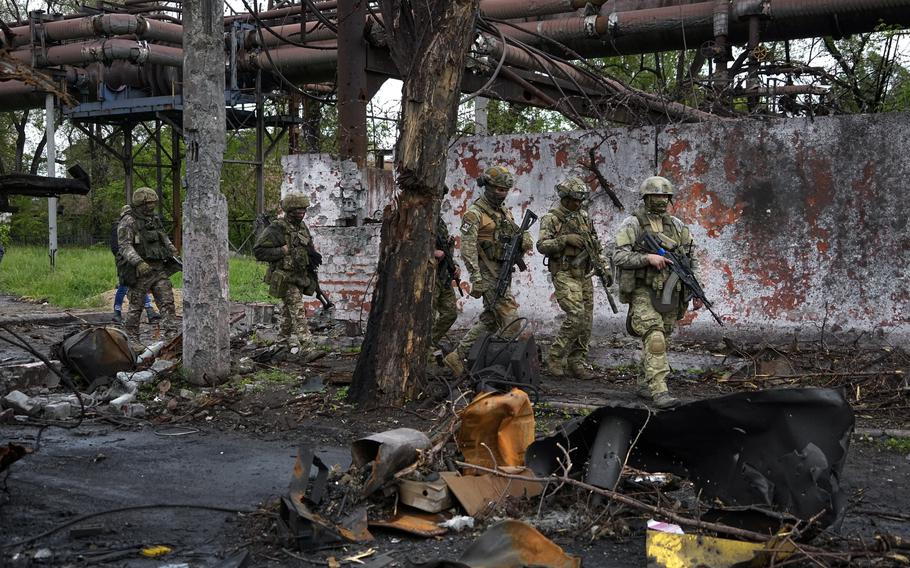 Russian troops walk in a destroyed part of the Illich Iron & Steel Works Metallurgical Plant in Mariupol, in territory under the government of the Donetsk People's Republic, eastern Ukraine, on May 18, 2022. Even as the Russian war machine crawls across Ukraine’s east, trying to achieve the Kremlin’s goal of securing a full control over the country’s industrial heartland of the Donbas, the Ukrainian forces are scaling up attacks to reclaim territory in the south. (AP)

“It doesn’t have to be a head-on attack,” Zhdanov said.

Moscow-backed local officials in Ukraine’s east and south have talked about holding votes on joining Russia as early as September. Those plans hinge on Russia’s ability to win full control of those areas by then.

“The Kremlin’s chief goal is to force Kyiv to sit down for talks, secure the existing line of contact and hold referenda in the autumn,” said Mykola Sunhurovsky, of the Razumkov Center, a Kyiv-based think tank.

He noted that Western weapons have boosted Ukraine’s capabilities, allowing it to reach targets far behind the front lines with a high degree of precision.

Ukraine has received about a dozen American-built HIMARS multiple rocket launchers and has used them to strike Russian ammunition depots, which are essential for maintaining Moscow’s edge in firepower. HIMARS systems have a range of 80 kilometers (50 miles), enabling the Ukrainians to hit the Russians from beyond the reach of most of the enemy’s artillery.

The Ukrainian strikes on munitions storage sites have caught the Russian army off guard, forcing it to move materiel to scattered locations farther from combat areas, lengthening supply lines, reducing the Russian edge in firepower and helping to slow Russia’s offensive in the east.

“They’ve got to get everything out to smaller, more dispersed stockpiles,” said Justin Crump, a former British tank commander who heads Sibylline, a strategic advisory firm. “These are all real irritants that slow Russia down. They’ve suffered the hit to the tempo of artillery fire, which was really key before.” 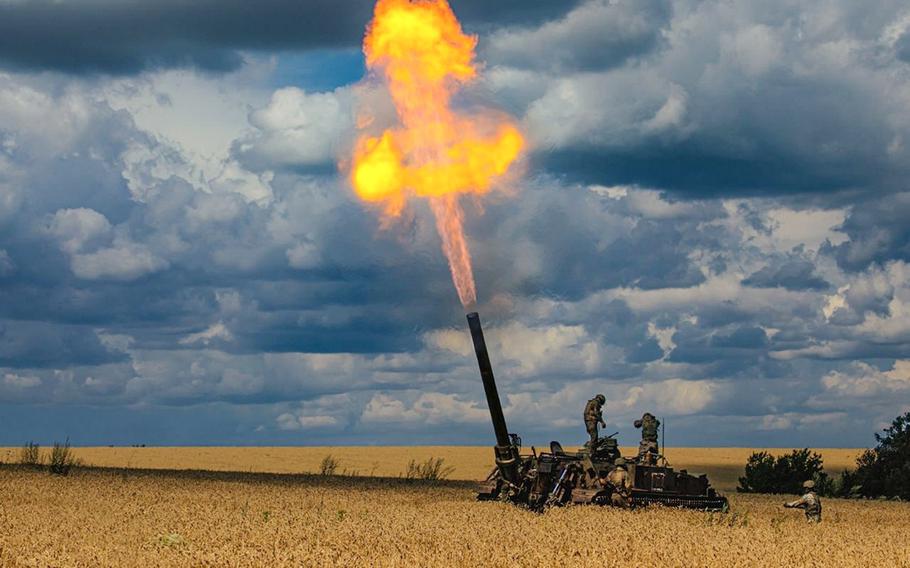 Crump said the Russian military had underestimated the threat posed by HIMARS and had left their ammunition depots exposed in known locations. “They thought their air defense would shoot down the missiles. And it didn’t really,” he said.

In a series of attacks that helped boost the country’s morale, the Ukrainians repeatedly used HIMARS to strike a key bridge across the Dnieper River in the Kherson region, cutting traffic across it and raising potential supply problems for Russian forces in the area.

Zhdanov, the Ukrainian military analyst, described the bridge as the key link for supplying Russian forces on the right bank of the Dnieper.

Russia still can use a second crossing on the Dnieper to ferry supplies and reinforcements to its troops in Kherson, which lies just north of the Crimean Peninsula, seized by Russia in 2014. But Ukraine’s strikes have shown Russia’s vulnerability and weakened its hold on the region.

“The Russians have the river at their back. That’s not a great place to be defending,” Crump said. ”They can’t get supplies easily. The morale is probably quite low at this point on that side of the river.”

He said Ukraine eventually may launch a massive counterattack involving large numbers of troops and weapons.

“That’s the opportunity for Ukraine, I think, to land a sort of more smashing blow on the Russians and push them back,” Crump said. “I think there’s more chance of that being tried here than we’ve seen at any other point.”

Crump noted that the mere prospect of a major Ukrainian counteroffensive in the south helped Kyiv by forcing the Russians to divert some of their forces from the main battleground in the east.

“That’s slowing down the Donbas offensive,” Crump said. “So even the threat of an offensive is actually succeeding for Ukraine at the moment.”

Danica Kirka in London and Yuras Karmanau in Tallinn, Estonia, contributed to this report.