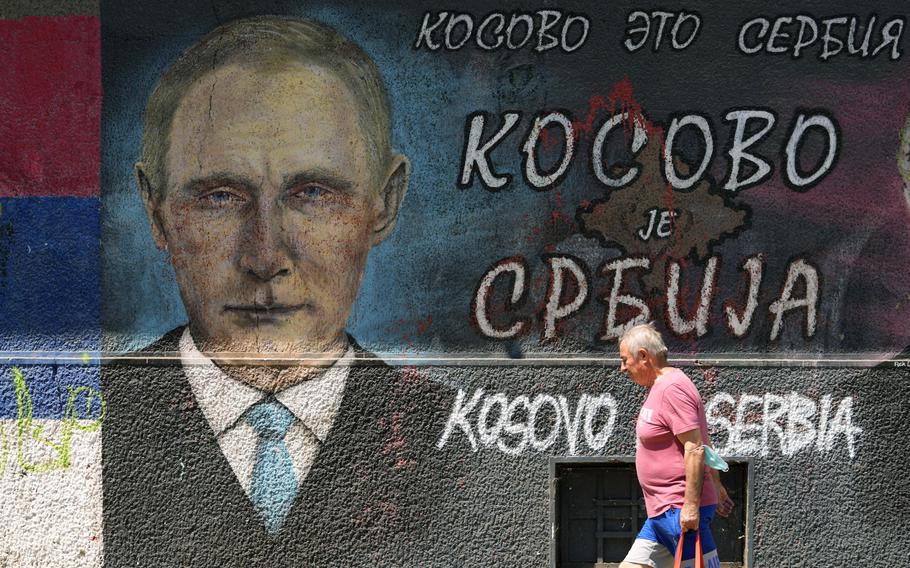 PRISTINA, Kosovo — Kosovo's authorities early Monday moved to ease mounting ethnic tensions in the country by delaying a controversial order on vehicle license plates and identity cards that triggered riots by minority Serbs who put up roadblocks, sounded air raid sirens and fired their guns into the air.

The Kosovo government accused neighboring Serbia of instigating the riots in order to destabilize the country that declared independence in 2008 after a NATO intervention that stopped Serbia's bloody crackdown against ethnic Albanian separatists in 1999.

Officials in Kosovo had earlier decided that as of Aug. 1 they would resume the practice of requiring vehicles that enter from Serbia to replace Serbia license plates with Kosovo ones. For the past 11 years, the reverse was required by Serbia for vehicles driving from Kosovo that transit through Serbia.

Kosovo also is planning to block its ethnic Serb minority from only using Serbian identity cards when crossing the border, the same approach that Serbia uses for Kosovar citizens.

After discussions with European and U.S. partners, the "reciprocity" license plate and identity card plan was being postponed for a month, until Sept. 1, the Kosovo government said.

EU Foreign Policy chief Josep Borrell said he welcomed the move, adding that he expected all roadblocks "to be removed immediately."

Kosovo Prime Minister Albin Kurti said Kosovar authorities would implement the decision once barricades in the north were removed. He added that it took only 20 seconds for 1,501 Serb citizens to enter Kosovo by midday using the entry-exit document, as opposed to an hour's wait for Kosovar citizens to enter Serbia.

A Kosovo government statement said that many "aggressive acts" like blocking roads and shot-firing in the northern areas dominated by ethnic Serbs took place on Sunday and accused Serbia of inciting them.

Kosovo was part of Serbia until an armed uprising in 1998-1999 by the territory's ethnic Albanian majority triggered a bloody crackdown by Serbs. A NATO bombing campaign to force Serbia's troops out of Kosovo ended the war. But Serbia refuses to recognize Kosovo's 2008 declaration of independence.

European Commission spokesman Peter Stano said the EU was following developments "very closely and with concern" and that both parties have been invited to Brussels "to sit down and talk in the framework of the EU facilitated dialog."

"Vucic and (Petar) Petkovic are the main responsible persons for the riots," Kurti wrote in Facebook. Petkovic is Belgrade's official in charge of Kosovo.

Osmani also wrote on Facebook that "Vucic's efforts to destabilize Kosovo" would fail.

Vucic responded by saying that "we've never been in a more complex situation than today" and blamed Kosovo for the escalating tensions over the licenses plates and ID cards.

He said Kosovo was trying to make itself appear to be the victim, adding that Kurti is trying to be seen in the same light as Ukrainian President Volodymyr Zelenskyy.

Vucic said Kosovo cannot stop its ethnic Serbs from using Serbian identity cards when they cross the border. He later visited Serbian Army headquarters in Belgrade in what was seen as a thinly veiled warning that all options - including military action - were on the table.

"It is not only about I.D. cards and registering vehicle plates. It is about the way of behavior," Selakovic. "If someone is really oriented to search the peaceful solution for all the existing issues, then that one should not act in the way they been acting."

Serbian ally Russia denounced the Kosovo government, saying the latest measures were intended to chase the remaining Serbs out of Kosovo. There are fears in the West that Russia could use Serbia to destabilize the Balkans and thus shift at least some attention from its war in Ukraine.

The NATO-led peacekeeping mission in Kosovo said it was monitoring the "tense" situation in northern Kosovo and was "prepared to intervene if stability is jeopardized."

The force said it would "take whatever measures are necessary to keep a safe and secure environment in Kosovo at all times, in line with its UN mandate."

The mission, which has some 3,800 soldiers from 28 countries, is led by NATO but is supported by the United Nations, the European Union and others.