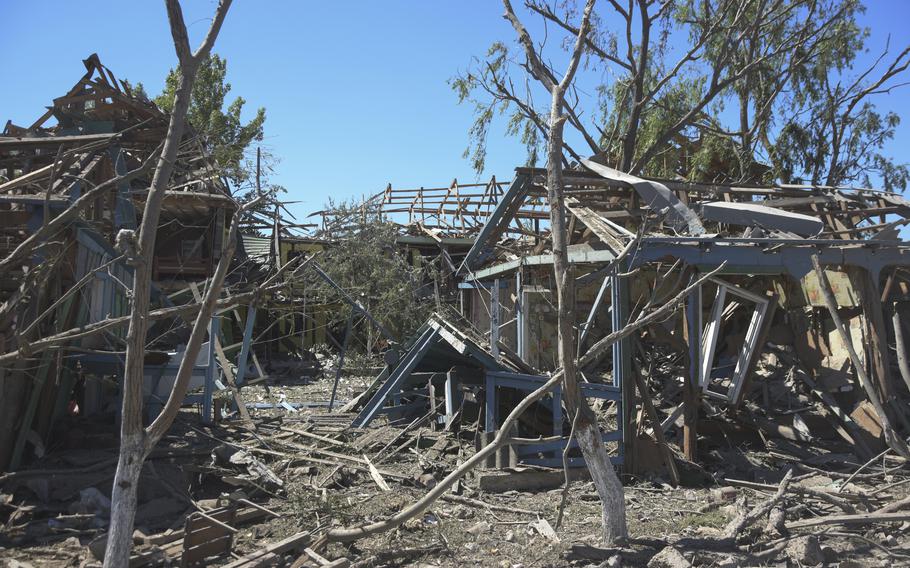 A view of apartment buildings destroyed by Russian shelling on the outskirts of Odesa, Ukraine, Tuesday, July 26, 2022. (Michael Shtekel/AP)

Hours after the strikes, a Moscow-installed official in southern Ukraine said the Odesa and Mykolaiv regions would soon be “liberated” by Russian forces, just like the already occupied Kherson region further east.

On the diplomatic front, Russia’s top diplomat repeated his insistence that Moscow was ready to hold talks with Ukraine on ending the war, though he once again claimed that Kyiv’s Western allies oppose a deal.

“We never refused to have talks, because everybody knows that any hostilities end at the negotiating table,” Russian Foreign Minister Sergey Lavrov said Tuesday during a trip to Uganda.

He said negotiations have gone no further since a meeting between the two sides in Istanbul at the end of March.

While Ukrainian officials have spoken of a possible counteroffensive in the south, the British Defense Ministry said Tuesday there was no indication a Ukrainian warship and a stockpile of anti-ship missiles were at Odesa’s port, as Moscow claimed when it struck the site over the weekend.

The British ministry said Russia sees Ukraine’s use of anti-ship missiles as “a key threat” limiting its Black Sea Fleet.

“This has significantly undermined the overall invasion plan, as Russia cannot realistically attempt an amphibious assault to seize Odesa,” the ministry said. “Russia will continue to prioritize efforts to degrade and destroy Ukraine’s anti-ship capability.”

It added that “Russia’s targeting processes are highly likely routinely undermined by dated intelligence, poor planning, and a top-down approach to operations.”

In the eastern Donetsk region, where the fighting has been focused in recent months, shelling continued along the entire front line, with Russian forces targeting some of the region’s largest cities, Bakhmut, Avdiivka and Toretsk, the presidential office said.

“There is not a single safe place left. Everything is being shelled,” Kyrylenko said in televised remarks. “But there are still evacuation routes for the civilian population.”

The Institute for the Study of War, a Washington-based think tank, reported that Moscow was using mercenaries from the shadowy Wagner Group to capture the Vuhledar Power Plant on the northern outskirts of the Bakhmut region village of Novoluhanske.

But Russian forces have made “limited gains” there, according to Ukraine’s General Staff.

The main regional Russian focus for the moment is on capturing Bakhmut, which the Russian military needs to press its eastern offensive on the Ukrainian strongholds in Donetsk, the cities of Sloviansk and Kramatorsk.

“Russian forces made marginal gains south of Bakhmut but are unlikely to be able to effectively leverage these advances to take full control of Bakhmut itself,” the Institute for the Study of War said.

Russian forces continued to strike civilian infrastructure in Kharkiv, Ukraine’s second-largest city, and the surrounding region in the country’s northeast.

Kharkiv Gov. Oleh Syniehubov said the strikes on the city resumed around dawn Tuesday and damaged a car dealership.

The Moldovan foreign ministry said Tuesday said a Moldovan citizen was killed and another wounded in what it claimed was a Ukrainian attack on Russia’s border with Ukraine. The unconfirmed report said the attack occurred at a border checkpoint in Russia’s Bryansk region.

Responding to Lavrov’s comment Monday that Moscow’s overarching goal in Ukraine is to free its people from its “unacceptable regime,” German Foreign Minister Annalena Baerbock said that Moscow wants “the complete subjugation of Ukraine and its people.”

“We must be prepared for this war — which Russia is conducting with absolute brutality, and is conducting in a way that no one else would — to last months,” Baerbock said during a visit to Prague.

In other developments Tuesday:

— European Union governments agreed to ration natural gas this winter to protect against Russian supply cuts. EU energy ministers approved a draft law designed to lower demand for gas by 15% from August through March. The legislation entails voluntary national steps to reduce gas consumption and, if they yield insufficient savings, a trigger for mandatory actions. Russian energy corporation Gazprom said it would cut gas flows through the Nord Stream 1 pipeline to Germany to 20% of capacity starting Wednesday. In his nightly video address Tuesday, Ukrainian President Volodymyr Zelenskyy accused the Russian government of “doing everything to make this winter the toughest for European countries.” “It is necessary to respond to terror - respond with sanctions,” he added.

— Russia’s space chief said the country will opt out of the International Space Station after 2024 and focus on building its own orbiting outpost. Yuri Borisov, appointed earlier this month to lead the state-controlled space corporation Roscosmos, said Russia would fulfill its obligations at the space station before it leaves the project. The move is part of a broader disengagement trend stemming from soaring tensions between Russia and the West over the Kremlin’s military action in Ukraine.

— The Russian military announced plans to hold large-scale drills in Russia’s east, noting that it continues regular troop training despite the action in Ukraine. The Russian Defense Ministry said Tuesday the Vostok 2022 (East 2022) exercise is scheduled for Aug. 30-Sept. 5. It added that airborne troops, long-range bombers and military cargo planes will participate.

— U.S. officials said they had not yet seen evidence of Iran supplying Russia with drones for use in the Ukraine war. The White House had previously released satellite images indicating that Russians had visited an Iranian airbase to see weapons-capable drones. But White House national security spokesman John Kirby said Tuesday, “We haven’t seen anything that it’s been actually effected.” Kirby said Moscow’s interest in the drones shows that sanctions and export controls are impacting Russia’s military production.