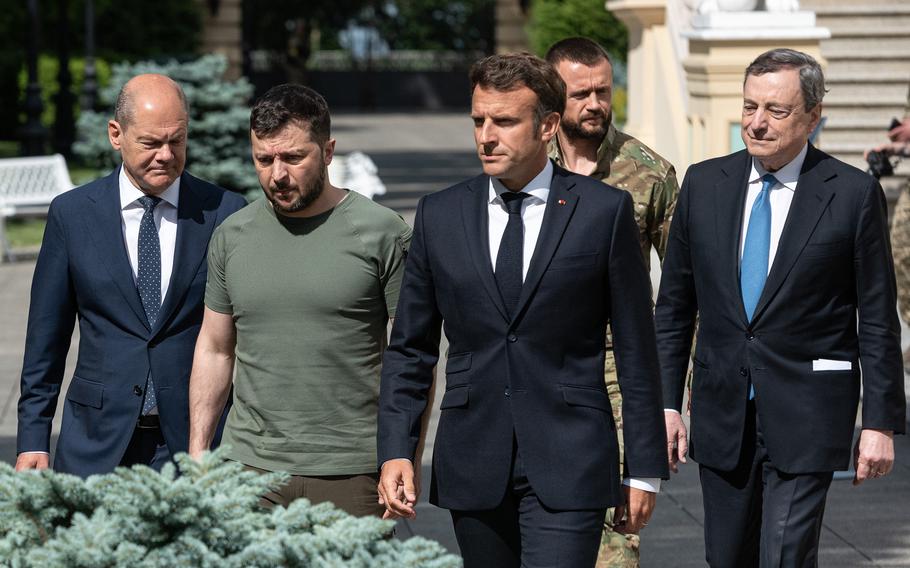 The European Union proposed 1 billion euros ($1.04 billion) in short-term financial relief for Ukraine to shore up the war-ravaged nation’s urgent cash needs, as Germany continues to hold up talks on a larger package, according to people familiar with the matter.

Ursula von der Leyen, the European Commission president, said the first part of an assistance plan “will allow us to give an immediate answer to the urgent needs of Ukraine.”

“The EU will keep on providing relief to Ukraine and in the longer-term support its reconstruction as a democratic and prosperous country,” she said in a statement on Friday.

EU officials prepared the 1 billion euro back-up option after the commission failed to secure Berlin’s blessing for a package that would entail 8.8 billion euros in loans, Bloomberg reported earlier Friday. In addition to qualms over the structure of the financing, Germany is calling for grants rather than loans, the people said.

The emergency funding, which needs to be approved by all member states before it can be disbursed, comes as details of the larger package are still being worked out. EU leaders, who met this month as well as in May, had reached a preliminary agreement on financial assistance.

Under the proposal, funds will be made available to Ukraine in the form of long-term loans on favorable terms, the commission said. The EU budget will cover the interest costs, and the loan will be backed for 70% of the value by amounts set aside from the EU budget.

The commission has been pushing for weeks to get backing for the payout of the larger volume to Ukraine, whose government is struggling to keep afloat financially as the Russian invasion destroys infrastructure and chokes the nation’s economy.

But various attempts have been scuppered as Germany delays the proposal, the people said. Chancellor Olaf Scholz’s government favors grants to ease Ukraine’s debt burden and disputes how to calculate and structure guarantees, according to the people, who spoke on condition of anonymity due to the sensitive nature of the matter.

Asked about the hold-up, German Finance Minister Christian Lindner said he’d already authorized 1 billion euros for Ukraine, which should be taken into account as talks on additional help move forward.

The EU’s larger assistance package would seek to make a “sizable” contribution toward covering Ukraine’s 2022 financing gap, which is estimated to be around $10 billion, according to a draft text of the proposal. The commission will seek to raise funds on the market as early as this summer to fund the credit line.

The Finance Ministry in Kyiv is running out of financing options as the war drags on, leaving the country increasingly reliant on outside help. Ukrainian officials are exploring the possibility of debt restructuring as a way to lighten its burden while remaining on good terms with international investors.

The EU funds will come on top of a previous credit line of 1.2 billion euros given to Kyiv earlier this year. The loan program will include a 25-year maturity, with a 10-year grace period to pay back the principal, said the people.

Group of Seven countries have made about $20 billion of financial commitments to Ukraine so far, according to the draft text of the proposal.