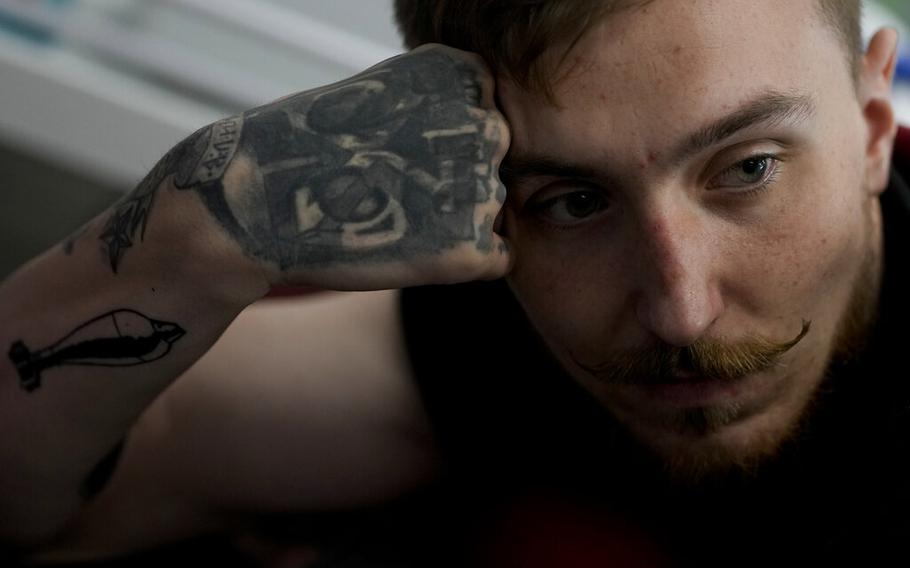 Vladislav Zahorodnii looks on during an interview at a clinic in Kyiv, Ukraine, on June 17, 2022. Zahorodnii was evacuated from Azovstal by helicopter on March 31, after three failed earlier attempts. (Natacha Pisarenko/AP)

KYIV, Ukraine — As was his habit before each flight, the veteran Ukrainian army pilot ran a hand along the fuselage of his Mi-8 helicopter, caressing the heavy transporter's metal skin to bring luck to him and his crew.

They would need it. Their destination — a besieged steel mill in the brutalized city of Mariupol — was a death trap. Some other crews didn't make it back alive.

Still, the mission was vital, even desperate. Ukrainian troops were pinned down, their supplies running low, their dead and injured stacking up. Their last-ditch stand at the Azovstal mill was a growing symbol of Ukraine's defiance in the war against Russia. They could not be allowed to perish.

The 51-year-old pilot — identified only by his first name, Oleksandr — flew just the one mission to Mariupol, and he considered it the most difficult flight of his 30-year-career. He took the risk, he said, because he didn't want the Azovstal fighters to feel forgotten.

In the charred hell-scape of that plant, in an underground bunker-turned-medical station that provided shelter from death and destruction above, word started reaching the wounded that a miracle might be coming. Among those told that he was on the list for evacuation was a junior sergeant who'd been shredded by mortar rounds, butchering his left leg and forcing its amputation above the knee.

"Buffalo" was his nom de guerre. He had been through so much, but one more deadly challenge loomed: escape from Azovstal.

A series of clandestine, against-the-odds, terrain-hugging, high-speed helicopter missions to reach the Azovstal defenders in March, April and May are being celebrated in Ukraine as among the most heroic feats of military derring-do of the four-month war. Some ended in catastrophe; each grew progressively riskier as Russian air defense batteries caught on.

The full story of the seven resupply and rescue missions has yet to be told. But from exclusive interviews with two wounded survivors; a military intelligence officer who flew on the first mission; and pilot interviews provided by the Ukrainian army, The Associated Press has pieced together the account of one of the last flights, from the perspective of both the rescuers and the rescued.

Only after more than 2,500 defenders who remained in the Azovstal ruins had started surrendering did Ukraine's President Volodymyr Zelenskyy first give wind of the missions and their deadly cost.

The Azovstal fighters' tenacity had frustrated Moscow's objective of quickly capturing Mariupol and prevented Russian troops there from being redeployed elsewhere. Zelenskyy told Ukrainian broadcaster ICTV that pilots braved "powerful" Russian air defenses in venturing beyond enemy lines, flying in food, water, medicine and weapons so the plant's defenders could fight on, and flying out the injured.

The military intelligence officer said one helicopter was shot down and two others never came back, and are considered missing. He said he dressed in civilian clothes for his flight, thinking that he could melt into the population if he survived a crash: "We were aware it could be a one-way ticket."

Said Zelenskyy: "These are absolutely heroic people who knew what was difficult, who knew that it was almost impossible. ... We lost a lot of pilots."

If Buffalo had had his way, he would not have lived to be evacuated. His life would have ended quickly, to spare him the agony he suffered after 120mm mortar rounds tore apart his left leg, bloodied his right foot, and peppered his back with shrapnel during street fighting in Mariupol on March 23. 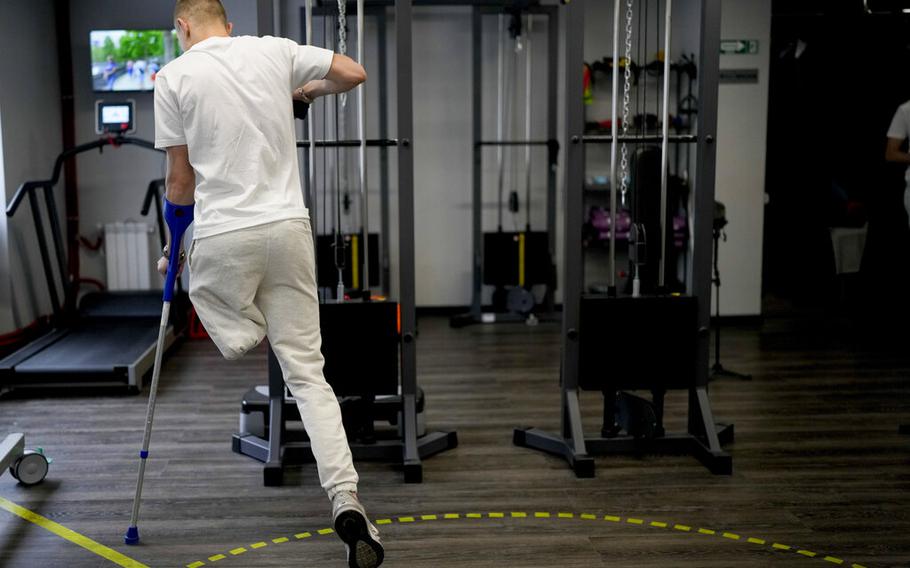 “Buffalo” trains his new prosthetic limb at a clinic in Kyiv, Ukraine, on June 17, 2022. “Buffalo” is among the wounded survivors that were evacuated during the last-ditch defense of the Azovstal steel mill after exploding 120mm mortar rounds tore apart his left leg, Buffalo says: “The absence of a leg is a challenge, not a problem’. (Natacha Pisarenko/AP)

The 20-year-old spoke to The Associated Press on condition that he not be identified by name, saying he didn't want it to seem that he is seeking publicity when thousands of Azovstal defenders are in captivity or dead. He had been on the trail of a Russian tank, aiming to destroy it with his shoulder-launched, armor-piercing NLAW missile on the last day of the invasion's first month, when his war was cut short.

Tossed next to the wreckage of a burning car, he dragged himself to cover in a nearby building and "decided it would be better to crawl into the basement and quietly die there," he said.

But his friends evacuated him to the Ilyich steel mill, which subsequently fell in mid-April as Russian forces were tightening their grip on Mariupol and its strategic port on the Sea of Azov. Three days passed before medics were able to amputate, in a basement bomb shelter. He considers himself lucky: Doctors still had anesthetic when his turn came to go under the knife.

When he came around, a nurse told him how sorry she was that he'd lost the limb.

He cut through the awkwardness with a joke: "Will they return the money for 10 tattoo sessions?"

"I had a lot of tattoos on my leg," he said. One remains, a human figure, but its legs are gone now, too.

After the surgery, he was transferred to the Azovstal plant. A stronghold covering nearly 11 square kilometers (more than 4 miles), with a 24-kilometer (15-mile) labyrinth of underground tunnels and bunkers, the plant was practically impregnable.

But conditions were grim.

"There was constant shelling," said Vladislav Zahorodnii, a 22-year-old corporal who had been shot through the pelvis, shredding a nerve, during street fighting in Mariupol.

Evacuated to Azovstal, he met Buffalo there. They already knew each other: Both were from Chernihiv, a city in the north surrounded and pounded by Russian forces.

Zahorodnii saw the missing leg. He asked Buffalo how he was doing.

"Everything is fine, we will go clubbing soon," Buffalo replied.

Zahorodnii was evacuated from Azovstal by helicopter on March 31, after three failed attempts.

It was his first helicopter flight. The Mi-8 took fire on its way out, killing one of its engines. The other one kept them airborne for the remainder of the 80-minute early morning dash to Dnipro city on the Dnieper River in central Ukraine.

He would mark his deliverance with a mortar-round tattoo on his right forearm: "I did it not to forget," he said.

Buffalo's turn came the following week. He was ambivalent about leaving. On the one hand, he was relieved that his share of the dwindling food and water would now go to others still able to fight; on the other, "there was a painful feeling. They stayed there, and I left them."

Still, he almost missed his flight.

Soldiers hauled him on a gurney out of his deep bunker and loaded him aboard a truck that rumbled to a pre-arranged landing zone. The soldiers wrapped him in a jacket.

The helicopter's cargo of ammunition was unloaded first. Then, the wounded were lifted aboard.

But not Buffalo. Left in a back corner of the truck, he'd somehow been overlooked. He couldn't raise the alarm because the mortar blasts had injured his throat, and he was still too hoarse to make himself heard over the whoop-whoop-whoop of the helicopter rotors.

"I thought to myself, 'Well, not today then,'" he recalled. "And suddenly someone shouted, 'You forgot the soldier in the truck!'"

Because the cargo bay was full, Buffalo was placed crosswise from the others, who'd been loaded aboard side by side. A crew member took his hand and told him not to worry, they'd make it home.

"All my life," he told the crew member, "I dreamed of flying a helicopter. It doesn't matter if we arrive — my dream has come true."

In his cockpit, the wait seemed interminable to Oleksandr, the minutes feeling like hours.

"Very scary," he said. "You see explosions around and the next shell could reach your location."

In the fog of war and with the full picture of the secret missions still emerging, it's not possible to be absolutely sure that Buffalo and the pilot who spoke to journalists in a video interview recorded and shared by the military were aboard the same flight. But details of their accounts match.

Both gave the same date: the night of April 4-5. Oleksandr recalled being fired upon by a ship as they swooped over waters out of Mariupol. A blast wave tossed the helicopter around "like a toy," he said. But his escape maneuvers got them out of trouble.

Buffalo also recalls a blast. The evacuees were told later that the pilot had avoided a missile.

Oleksandr gunned the helicopter to 220 kilometers (135 miles) per hour and flew as low as 3 meters (9 feet) above the ground — except when hopping over power lines. A second helicopter on his mission never made it back; on the return flight, its pilot radioed him that he was running short of fuel. It was their last communication.

On his gurney, Buffalo had watched the terrain zip past through a porthole. "We flew over the fields, below the trees. Very low," he said.

They made it to Dnipro, safely. Upon landing, Oleksandr heard the wounded calling out for the pilots. He expected them to yell at him for having tossed them around so violently during the flight.

"But when I opened the door, I heard guys saying, 'Thank you,'" he said.

"Everyone clapped," recalled Buffalo, now rehabbing with Zahorodnii at a Kyiv clinic. "We told the pilots that they had done the impossible."