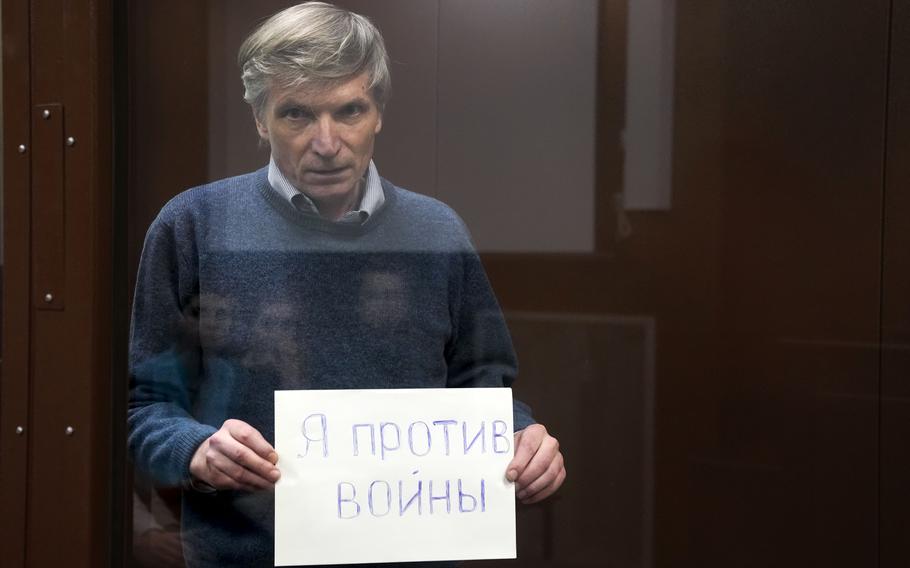 Alexei Gorinov holds a sign "I am against the war" standing in a cage during hearing in the courtroom in Moscow, Russia, Tuesday, June 21, 2022. Moscow's Meshchansky District Court ruled Tuesday that Alexei Gorinov, a member of the municipal council in one of Moscow's districts, should stay in custody pending his trial on charges of discrediting the country's armed forces. (Alexander Zemlianichenko/AP Photo)

MOSCOW (AP) — A court in the Russian capital on Tuesday extended the arrest of a municipal legislator charged with discrediting the country's military after his criticism of Russia's military action in Ukraine.

Gorinov, a member of the municipal council of Moscow's Krasnoselsky District, has remained in jail since his arrest in April. He was accused of discrediting the country's military after speaking out against Russia's military action in Ukraine during the council's session in March.

Addressing the court on Tuesday, Gorinov rejected the charges and insisted that he was merely expressing his political views, noting that "what I said was my personal opinion and belief."

He may face a fine or a prison term of up to 10 years if convicted.

Gorinov's lawyers asked the court to release him from jail and put him under house arrest, noting that he was suffering from tuberculosis, but the court dismissed the appeal and ruled that Gorinov should remain in jail until Nov. 19.

Gorinov is the first municipal legislator to face trial on charges of discrediting the country's armed forces — a new criminal article introduced after the start of the Russian campaign in Ukraine that the government describes as the "special military operation." Critics of the Kremlin have denounced it as part of authorities' efforts to stifle dissent and control the message.