Harry and Meghan all smiles despite boos at Platinum Jubilee service 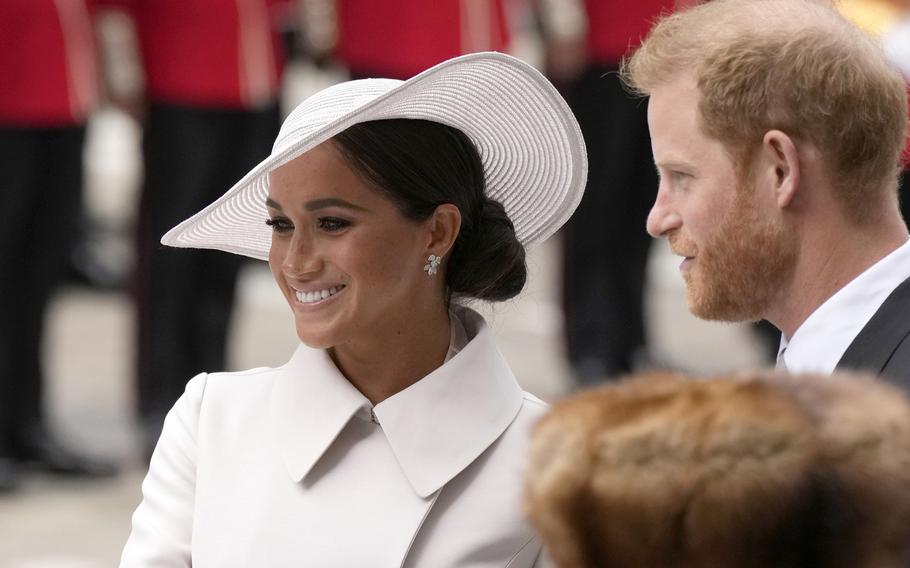 Prince Harry and Meghan Markle, Duke and Duchess of Sussex arrive for a service of thanksgiving for the reign of Queen Elizabeth II at St Paul’s Cathedral in London, Friday, June 3, 2022 on the second of four days of celebrations to mark the Platinum Jubilee. The events over a long holiday weekend in the U.K. are meant to celebrate the monarch’s 70 years of service. (Matt Dunham/Getty Images/TNS)

(Tribune News Service) — Debate erupted Friday over whether some in the crowd outside St. Paul’s Cathedral in London Friday booed when Prince Harry and Meghan Markle arrived for the thanksgiving service in honor of the queen’s Platinum Jubilee.

During the Sky TV broadcast, presenters said a mix of cheers and jeers accompanied the appearance of the Duke and Duchess of Sussex, who nonetheless kept their composure and continued to smile as they held hands and climbed the steps at St. Paul’s. It was the California-based couple’s first public appearance with other members of the royal family since the tension-filled Commonwealth service at Westminster Abbey in March 2020, amid their acrimonious departure from royal life just before the onset of the COVID-19 pandemic.

The jeers apparently were audible enough that Sky News commentator Rhiannon Mills said the negative reaction from some shouldn’t be surprising. She mentioned that the couple had become controversial in the U.K., because of the view that they “snubbed” the queen by not giving her sufficient notice before they went public in January 2020 with their plans to step away from royal duties and move to North America.

For another perspective, Chris Ship, the royal reporter for ITV News, tweeted that it was too hard to hear the crowd’s reaction over the peeling church bells. But the Daily Beast said the bells only made it difficult to ascertain how many in the crowd had responded negatively to the couple, adding that boos and catcalls were clearly audible on TV news coverage.

Richard Palmer, the royal correspondent for the Daily Express, said that the couple faced “a loud reaction” and that it came from a mix of boos and cheers.

Palmer later tweeted that the mixed reaction turned to cheers by the time the couple reached the top of the steps.

Palmer’s Twitter feed was immediately filled with replies from fans of the Sussexes, several of whom said, “I just heard cheers.” One person suggested that he, as a member of the British media, was eager to present the Sussexes in a bad light.

“Sorry but the manipulation isn’t working well. The Commonwealth loves them and you can’t stop it,” the person tweeted.

But others said they definitely heard boos. “I could still hear the boos over the bells at home. I was shocked at that,” another said.

But still others insisted that the boos actually were intended for Prime Minister Boris Johnson, who arrived around the same time as the Sussexes. Very audible jeers erupted when Johnson and his wife Carrie arrived at St. Pauls.

On the other hand, the crowd was clearly jubilant when Prince William, the future king and Harry’s older brother, and his wife, Kate Middleton, arrived. “That’s the biggest cheer of the day,” royal author Andrew Morton said on Sky TV.

For the service on Friday, much was made of the fact that Harry and Meghan and William and Kate would be together at the same event for the first time in two years. Unfortunately, the real star of the event, 96-year-old Queen Elizabeth II, who is celebrating her 70th year on the throne, had to pull out of attending at the last minute due to ongoing mobility issues. Her disgraced second son, Prince Andrew, also backed out at the last minute, saying he had tested positive for COVID-19.

For all the talk about Harry and Meghan’s reunion with William and Kate, the seating and the order of the service appeared to be arranged so that they was little chance that the feuding brothers and their wives would interact or be photographed together. Harry and Meghan didn’t meet with the Duke and Duchess of Cambridge outside, and the couples were seated some distance from each other in the church.

Later the Sussexes turn up at the reception at the nearby Guildhall, where various members of the royal family and senior U.K. politicians mingled together in a large reception room, the Daily Mail reported.

They instead headed back to Frogmore Cottage, the home in Windsor Park where they are staying and that was given to them by the queen when they still lived in the U.K. The Daily Mail said they hadn’t been expected at the reception, while also reporting that the couple were trying to keep a “low profile” while in London, so they won’t be accused of overshadowing the queen’s celebrations.

The Daily Beast also reported that the couple privately introduced the queen to their 1-year-old daughter Lilibet Diana for the first time Thursday, during a lunch with the monarch after Trooping the Color. The couple have said they named Lilibet in honor of the queen’s childhood nickname.

Despite some people’s negative reaching to their presence in the U.K., the Sussexes appeared cheerful and relaxed during Friday’s thanksgiving service, smiling and chatting easily with Harry’s relatives and sharing a joke and laughing with the Archbishop of York, the Daily Mail reported.

The Cambridges appeared more reserved during the service, although they also seemed to be in good spirits, especially when the crowds cheered them when they arrived at St. Paul’s.

In general, both couples managed to get through the service without the drama that beset their last public event together. During the 2020 Commonwealth service, William and Kate reportedly gave Harry and Meghan the “cold shoulder,” according to “Finding Freedom,” the sympathetic biography of the Sussexes.

The brothers’ once close relationship has fallen apart over a range of issues, according to “Finding Freedom” and “The Palace Papers,” famed editor Tina Brown’s new book about the royal family. The issues include Harry’s reported jealously over William’s higher status in the monarchy as well as William’s concerns about Harry’s whirlwind romance with Meghan, an American former TV actress who later admitted to Oprah WInfrey that she had no idea what she was getting into when she married into the British royal family in the 2018.

At the 2020 service, Harry also was seen glowering. According to “Finding Freedom,” he was reportedly put out over the decision to cut him and Meghan from a prominent role in the traditional procession with the queen down the aisle.

Since Harry and Meghan’s move to California, they gave their bombshell interview with Oprah Winfrey, during which they alleged that a member of the royal family said racist things about their future children, Harry said his brother was “trapped” in his role in the royal family, and Meghan claimed that Kate made her cry before her wedding.

TIna Brown has said that the relationship between the two brothers still isn’t good. “I’m told there’s absolutely nothing going on between them at the moment,” she told the Telegraph.

Amid tension at the service in 2020 or on Friday, Meghan, more than anyone else, managed to maintain her composure. It’s likely she’s able to draw on her experience as a former TV actor, which taught her how to hold herself together in high pressure moments and to know where the camera is so that she can flash a megawatt smile.