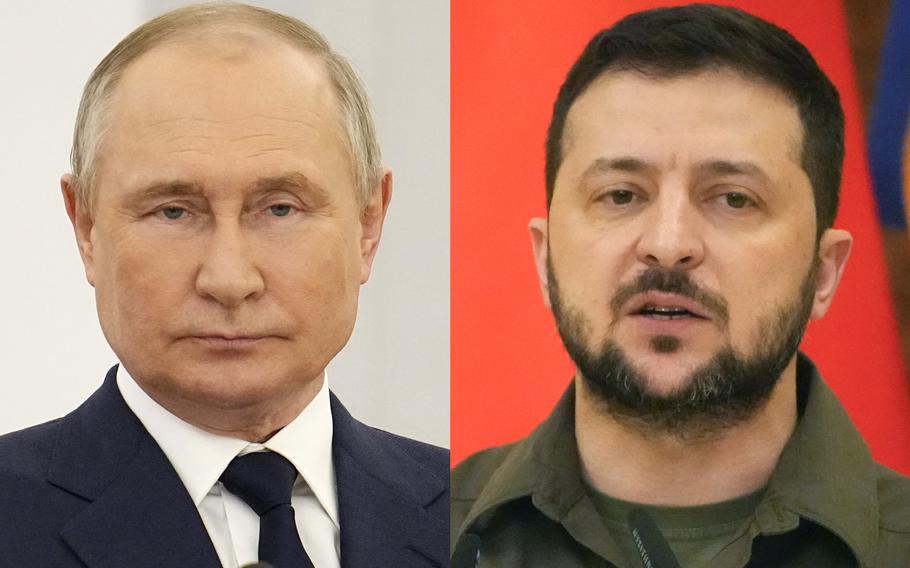 Russian President Vladimir Putin at the Kremlin in Moscow, on April 26, 2022, and Ukrainian President Volodymyr Zelenskyy in Kyiv, Ukraine, on May 8, 2022. An interminable and unwinnable war in Europe? That’s what NATO leaders fear and are bracing for as Russia’s war in Ukraine grinds into its third month with little sign of a decisive military victory for either side, and no resolution in sight. (AP)

Russia’s Defense Ministry said Saturday its forces now control Lyman, a key transport hub providing access to bridges over the Siversky Donets river, and the British Defense Ministry said most of the town has probably fallen into Russian hands. However, Ukrainian President Volodymyr Zelensky sounded a defiant note on Friday, saying: “If the occupiers think that Lyman or Severodonetsk will be theirs, they are wrong.”

Russia is also trying to encircle the eastern city of Severodonetsk, but the regional governor said Saturday that the city has not been cut off. The Pentagon described the city as “still being actively fought over,” and compared the Donbas clashes to a “knife fight” where control of territory has been shifting rapidly.

“As a result of joint action by [the] People’s Militia of Donetsk People’s Republic and the Russian Armed Forces, Krasnyi Liman has been completely liberated from Ukrainian nationalists,” the Russian Defense Ministry said in an English-language update published on Telegram.

Russian-backed separatist forces claimed to have taken full control of the city on Friday. Lyman provides access to key rail links and bridges over the Siversky Donets river.

“As a result of joint action by [the] People’s Militia of Donetsk People’s Republic and the Russian Armed Forces, Krasnyi Liman has been completely liberated from Ukrainian nationalists,” the Russian Defense Ministry said in an English-language update published on Telegram.

The British Defense Ministry said Saturday that Russian advances in the area “would give Russia an advantage in the potential next phase of the Donbas offensive, when it will likely seek to advance on key Ukrainian-held cities” deeper in Donetsk.

Fighting continues to rage for control of Severodonetsk, about 35 miles east of Lyman in the Luhansk region.

Around 20,000 people lived in Lyman before the war, and although many were evacuated, the head of the city’s rescue service told The Washington Post earlier this month that there were many civilian casualties.

- German Chancellor Olaf Scholz and French President Emmanuel Macron urged Russian President Vladimir Putin on Saturday to agree to an immediate cease-fire and the withdrawal of Russian troops from Ukraine.

The three leaders spoke for 80 minutes in a phone call at the initiative of the French and German leaders, a news release from the German government said. Scholz and Macron called on Putin to negotiate directly with Ukrainian President Volodymyr Zelensky to end the three-month conflict.

Putin said Moscow was ready to continue peace talks with Kyiv, Russia’s Tass news agency reported, citing the Kremlin press service. He blamed the lack of diplomatic progress on Ukraine. Zelensky said Friday that Ukraine was not eager to talk with Putin but that negotiations would be necessary to stop the war.

The German and French leaders also called on Putin to improve the “humanitarian situation of the civilian population” in Ukraine. Putin, meanwhile, warned the West against continuing to send Ukraine Western weapons, Tass reported.

Putin, Scholz and Macron also discussed the global food crisis, which has been exacerbated by Russia’s blockade of Ukrainian ports. The U.N. World Food Program warned that millions of people around the world face rising food prices and hunger as Russia obstructs Ukrainian grain exports.

Putin pledged to Scholz and Macron that if Ukraine demines areas of the sea around ports, Russia would not use the opportunity to take “offensive actions,” the German statement said. The three leaders agreed that the United Nations would play a key role in reaching an agreement on opening the ports.

“Russia is ready to help find options for unhampered exports of grain, including exports of Ukrainian grain from the Black Sea ports,” the Kremlin said, according to Tass.

But Putin repeated Moscow’s misleading claim that Western sanctions were primarily to blame for global food supply issues. Putin told Italian Prime Minister Mario Draghi in a phone call Thursday that the West must lift sanctions in order for Russia to take action on the food crisis, according to a Kremlin readout of the call.

- The United Nations says it has corroborated the deaths of more than 4,000 civilians in Ukraine since the Russian invasion began on Feb. 24, while acknowledging that its figures are incomplete and that the “actual toll is much higher.”

Ongoing fighting has led to difficulties and delays in confirming reports in a number of areas, the Office of the U.N. High Commissioner for Human Rights (OHCHR) said. Estimates of the number of people killed during the war so far have varied drastically, given the difficulty of gaining access to many areas and victims, as well as the pressure on public health systems.

The U.N. figures released Friday represent the numbers of civilians killed and injured as verified through interviews with victims, their families or eyewitnesses, as well as official records and reports or open-source materials.

More than 260 children are among the 4,031 people confirmed killed, while at least 4,735 people have been injured, the OHCHR said, as the war approaches its 100th day. Most of the casualties were caused by shelling and airstrikes, it said, belying Russian claims that it has avoided bombarding civilians. Over half of the confirmed deaths were recorded in the southeastern Donetsk and Luhansk regions, which have been the focus of intense Russian bombardment.

One of the areas where official figures have been particularly difficult to verify is the southeastern city of Mariupol, which came under siege early in the war and was captured by Russian forces last week. Hundreds of people were killed in a single attack in March, when Russia bombed a theater that served as a shelter. Mass graves have also been reported around the city.

The Washington Post’s Claire Parker contributed to this report.