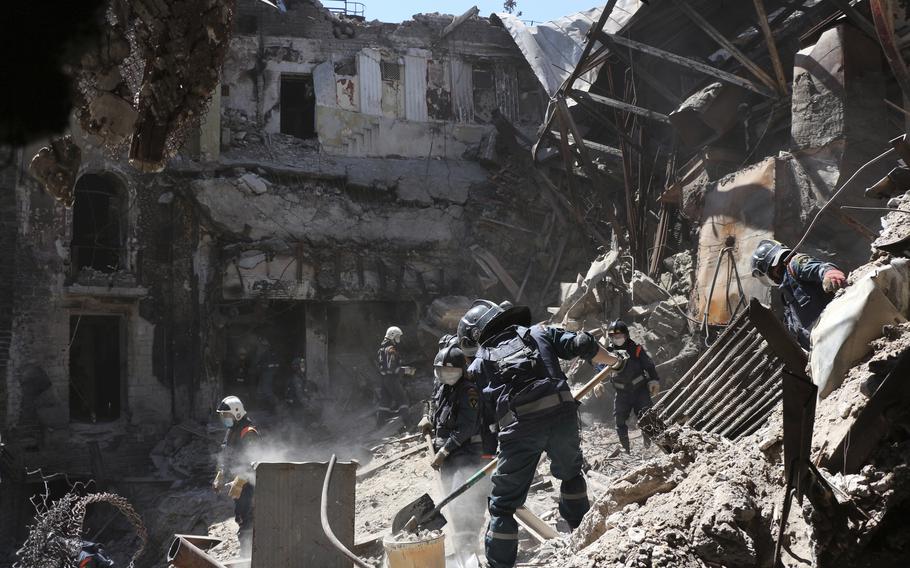 Donetsk People Republic Emergency Situations Ministry employees clear rubble at the side of the damaged Mariupol theater building during heavy fighting in Mariupol, in territory under the government of the Donetsk People's Republic, eastern Ukraine, Thursday, May 12, 2022. (AP)

KYIV, Ukraine — Rocket attacks on Ukraine's central Poltava region on Thursday were "perhaps the most intense for the duration of the war," the regional governor said.

"Today's shelling of the Poltava region is perhaps the largest during the course of this full-scale war," Dmitry Lunin wrote in a Telegram post. "12 Russian missiles hit the infrastructure in (the city of) Kremenchuk; most of them hit an oil refinery that was not operational anyway."

"Rescuers are putting out a fire at the refinery. Luckily, no one was hurt," Lunin added.

ROUNDUP OF OTHER DEVELOPMENTS:

KYIV, Ukraine — At least two civilians died Thursday as a result of a shelling attack on the outskirts of Kharkiv, Ukraine's second-largest city, local authorities said that same day.

"As a result of the shelling, two people were killed, four more were injured, two of whom are doctors. All these people are civilians," Vyacheslav Zadorenko, the mayor of the suburban town of Derhachi, wrote in a Telegram post.

He added that the attack also damaged a building housing a humanitarian aid unit, municipal offices, and hospital facilities.

"None of the sites that came under shelling, not to mention private houses that are destroyed daily, had anything to do with military infrastructure," Zadorenko said.

KYIV, Ukraine — Ukraine's foreign minister said Thursday that everyone involved in the transportation and sales of grain seized by Russia in occupied areas of the country will face legal consequences.

"Russia is a criminal three times over: it bombed Syria to ruins, occupied part of Ukraine, and is now selling stolen Ukrainian grain to Syria," the ministry's press service cited Dmytro Kuleba as saying.

"I want to remind the participants in this deal: what is stolen has never brought happiness to anyone. Everyone involved in the sale, transportation or purchase of stolen grain is an accomplice to the crime," Kuleba said.

"Your actions will have adequate international legal consequences. We will do everything to make your life as difficult as possible," he continued, commenting on media reports that on Wednesday, a Russian ship carrying Ukrainian grain moored off the Syrian coast.

Kuleba also claimed that thanks to the efforts of Ukrainian diplomats, Egypt and Lebanon had previously refused to buy the "looted" grain shipment.

MOSCOW — A student of a local construction college died as a result of a shelling attack on the Russian village of Solokhi near the Ukrainian border, a teacher at the college told the Interfax news agency Thursday.

"Russian Nifodyov died as a result of the shelling of the peaceful village of Solokhi by the Armed Forces of Ukraine," Nikolai Ignatenko was cited as saying.

Earlier on Thursday, the governor of Russia's Belgorod region, where Solokhi is located, said that at least one civilian had been killed in the shelling, while six more were injured. While governor Vyacheslav Gladkov likewise blamed the attack on Kyiv's forces, it was not immediately clear whether the slain civilian he referred to was Nifodyov.

"On May 12, the Russians killed four more civilians of the Donbas: two in Novoselivka, one in Avdiivka and one in Lyman. Five more people were injured," Pavlo Kyrylenko wrote in a Telegram post, referring to a village and two cities in the Donetsk region, one of two which make up the Donbas.

His claims could not be immediately verified.

ROME — Ukrainian President Volodymyr Zelenskyy says that he's ready to talk with Russian President Vladimir Putin and that "we must find an agreement,'' but with no ultimatum as a condition.

Zelenskyy also told Italian RAI state TV in an interview scheduled to be broadcast on Thursday night that Ukraine will never recognize Crimea as part of Russia, which annexed that part of southern Ukraine in 2014.

"Crimea has always had its autonomy, it has its parliament, but on the inside of Ukraine," Zelenskyy said, in excerpts of the interview that RAI released earlier on Thursday.

The interviewer asked the Ukrainian leader about a comment by French President Emmanuel Macron cautioning against any humiliation of Putin.

"We want the Russian army to leave our land, we aren't on Russian soil,'' Zelenskyy replied. "We won't save Putin's face by paying with our territory. That would be unjust."

In the early hours of Thursday, Russian troops fired multiple rockets at a school and student accommodation complex in the city of Novhorod-Siversky, the Ukrainian Operational Command "North" said in a Facebook post.

The accuracy of these claims could not be immediately verified.

KYIV, Ukraine — Ukrainian ministry officials said Thursday that Russian troops were trying to block Kyiv's forces from advancing as far as the Ukrainian-Russian border in the northeastern Kharkiv region.

"In the direction of Kharkiv, Russian army units are regrouping and trying to prevent the further advance of our troops in the direction of the state border of Ukraine," defense ministry spokesman Oleksandr Motuzyanyk said in his regular media briefing.

"To this end, the occupiers launch unceasing artillery attacks on our troop units in order to inflict human losses, as well as to damage weapons and military equipment," Motuzyanyk added.

He did not clarify how close Ukrainian forces were to the border.

According to the defense ministry briefing, Moscow's troops were opening fire "along the entire line of confrontation" in Ukraine's east, and attempting to penetrate Ukrainian defenses.

Also on Thursday, the Ukrainian military's General Staff said in its daily operational statement that Russian forces continued their attempts to storm several cities in Ukraine's industrial heartland of Donbas that day, but had no success.

BERLIN — The U.N.'s top human rights body has overwhelmingly passed a resolution calling on its investigators to specifically look into possible rights abuses and violations in northern Ukraine shortly after Russia's invasion.

In a 33-2 vote, with 12 abstentions, the Human Rights Council concluded a special session Thursday on Russia's invasion of Ukraine also by calling on Russia to grant international human rights groups "unhindered, timely, immediate, unrestricted and safe access" to people who have been transferred from Ukraine to Russia or areas controlled by Russian forces or affiliates.

Only China and Eritrea voted against the measure, which also urged the U.N. human rights office to report on events in Mariupol, a besieged southeastern port city where thousands of civilians are believed to have been killed. Access to the city has been virtually nonexistent for international human rights during recent fighting there.

The council called on a team of investigators known as a Commission of Inquiry to look specifically into the "events" in the Kyiv, Chernihiv, Kharkiv and Sumy regions of Ukraine in late February and early March after Russia's invasion "with a view to holding those responsible to account." The commission was already created to investigate rights abuses and violations generally in Ukraine.

Many atrocities in the war came to light last month after Moscow's forces aborted their bid to capture Kyiv and withdrew from around the capital.

KYIV, Ukraine — Between 8 and 12 Russian missiles hit the oil refinery and other infrastructure in the Ukrainian industrial hub of Kremenchuk Thursday, the acting governor of the central Poltava region said that same day.

In a Telegram post, Dmytro Lunin urged residents to remain in underground shelters, citing the "persistent" threat of airstrikes.

In early April, Lunin had said that the Kremenchuk refinery - Ukraine's only remaining fully functional facility of its kind at the time — was no longer operational following a Russian attack. Moscow claimed to have targeted the refinery again at the end of the month, and to have destroyed further fuel production and storage facilities.

BERLIN — The U.N. refugee agency is reporting that more than 6 million people have now fled Ukraine in the wake of Russia's invasion.

Geneva-based UNHCR also said Thursday that the number of refugees who have returned back to Ukraine, either partially or fully, has reached more than 1.6 million. It says that number reflects cross-border movements, and doesn't necessarily indicate "sustainable" returns. The agency says it's too early to draw conclusions about "definitive trends" on returns.

Matthew Saltmarsh, an agency spokesman, also said Thursday that a total of 2.4 million people who have left Ukraine have moved beyond Ukraine's immediate border countries which have taken in the lion's share of refugees from the country. Poland alone has registered more than 3.2 million people who fled Ukraine. It and other European Union member countries have open borders, making tracking where people go a complex endeavor.

On Tuesday, the U.N. High Commissioner for Refugees, Filippo Grandi, tweeted that the number of refugees from Ukraine had reached the same 5.7 million figure as the tally from Syria's 11-year war, which previously was the source of the world's biggest refugee crisis.

UNITED NATIONS -- The U.N. children's agency says the war in Ukraine is a "child rights crisis" where education is under attack and nearly 100 youngsters have been killed in just the last month.

UNICEF Deputy Executive Director Omar Abdi told the U.N. Security Council Thursday that more children have been injured, millions have been displaced and schools continue to be attacked and used for military purposes.

The school year came to a standstill after Russia invaded Ukraine on Feb. 24, and as of last week at least 15 of 89 UNICEF-supported schools in the country's east have been damaged or destroyed in the fighting, he said.

In mid-March, over 15,000 schools resumed education in Ukraine mostly through remote learning or in-person hybrid options, he said.

"It is estimated that 3.7 million children in Ukraine and abroad are using online and distance learning options," Abdi said.

But he stressed that there are still "enormous obstacles" to education including availability for learning, resources, language barriers and movements of children and their families.

KYIV, Ukraine — Talks are underway between Kyiv and Moscow on the possible evacuation of 38 "severely wounded" Ukrainian troops from the Azovstal steelworks in Mariupol, Ukraine's deputy PM said Thursday afternoon.

The steel mill is the only remaining stronghold of Ukrainian resistance in the ruined port city, and is now surrounded by Russian forces.

"We are working step by step," Iryna Vereshchuk wrote in a public post on the Telegram messenger app.

She said that Kyiv hoped to exchange the soldiers for 38 "significant" Russian prisoners of war, before moving on to the next stage of the negotiations. She did not specify what this next stage would concern, but said that there were no negotiations "on the exchange of 500 or 600 people."

Earlier on Thursday, an official at the Ukrainian President's Office said that Kyiv hoped to extract "half a thousand" wounded Ukrainian fighters from Azovstal.

Members of the Azov Regiment holed up inside the plant have repeatedly refused to surrender, citing fears of being killed or tortured. On Tuesday, Ukrainian officials said that "more than a thousand" Ukrainian troops, many of them injured, remained at Azovstal.