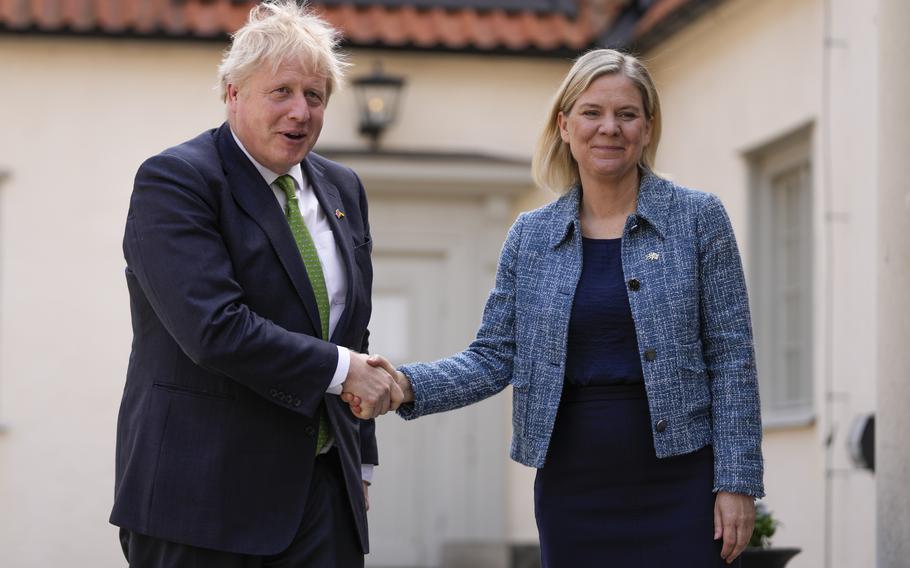 British Prime Minister Boris Johnson, left, is welcomed by Sweden’s Prime Minister Magdalena Andersson in Harpsund, the country retreat of Swedish prime ministers, Wednesday, May 11, 2022. Johnson is visiting Sweden and Finland ahead of their decision on whether to apply for NATO membership. (Frank Augstein/Pool via AP)

HELSINKI — Britain pledged to come to the aid of Sweden and Finland, including with military support, if the two Nordic nations came under attack under security deals Prime Minister Boris Johnson signed Wednesday with his Swedish counterpart in Stockholm and the Finnish president in Helsinki.

Sweden and Finland are pondering whether to abandon their historic neutrality and join NATO following Russia's invasion of Ukraine on Feb. 24. Johnson said in a statement that Wednesday's agreements will allow Britain, a major, nuclear-armed NATO member, "to cooperate with key Nordic partners and their armed forces, in all domains, including cyberspace."

Wednesday's agreements also cover closer collaboration on new technology and intelligence-gathering between Britain and the two Nordic countries. Johnson said he would offer to increase British military deployments to the region, including with air force, army and navy assets and personnel.

Wednesday's agreements will "fortify northern Europe's defenses, in the face of renewed threats," Johnson said in a statement, adding that they are symbols "of the everlasting assurance between our nations."

"These are not a short-term stop-gap, but a long-term commitment to bolster military ties and global stability, and fortify Europe's defenses for generations to come," Johnson said in the statement.

"And whether it's in the event of a disaster or a military attack, what we're saying today is that upon request from the other party, we would come to the other party's assistance," Johnson told a joint news conference in Sweden with Prime Minister Magdalena Andersson.

He called the war in Ukraine Russian President Vladimir "Putin's bloodthirsty campaign against a sovereign nation."

Andersson said: "Putin thought he could cause division, but he has achieved the opposite. We stand here today more united than ever."

In Finland, Johnson held talks with President Sauli Niinisto, who has a significant role in the nation's foreign and security policy decisions, at the Presidential Palace in Helsinki. The Finnish head of state said Moscow could only blame itself should his nation of 5.5 million become a NATO member.

"You (Russia) caused this. Look at the mirror," Niinisto said pointedly, "So in my thinking, this is quite simple, actually. We increase our security and we do not take it away from anybody. It is not a zero-sum game."

The Kremlin has warned of "military and political repercussions" if Sweden and Finland decide to join NATO. Andersson said that Russia would increase its "military presence in this region if Sweden and, or, Finland sends in an application."

Should they apply, there will be an interim period lasting from when an application has been handed in until all 30 NATO members' parliaments have ratified it. The two Nordic countries are expected to announce their positions on NATO membership in the coming days.

"If Finland makes this historical step it is for the security of our own citizens," Finnish Prime Minister Sanna Marin told a news conference after talks with Japanese Prime Minister Fumio Kishida in Tokyo Wednesday. "Joining NATO will strengthen the whole international community that stands for common values."

Johnson met with Andersson in Harpsund, the country retreat of Swedish prime ministers, which is located about 90 kilometers (55 miles) southwest of Stockholm.

"In times of crisis, cooperation becomes even more important. And this applies not least for our international defense partnerships. And Sweden's partnerships with the U.K. and with NATO have been crucial during these exceptional times," Andersson said.

In 2017, Sweden and Finland joined the British-led military rapid reaction force, which is designed to be more flexible and respond more quickly than the larger NATO alliance. It uses NATO standards and doctrine, so it can operate in conjunction with NATO, the United Nations or other multinational coalitions. Fully operational since 2018, the force has held a number of exercises both independently and in cooperation with NATO.

Olsen reported from Copenhagen, Denmark. Mari Yamaguchi in Tokyo contributed to this report.