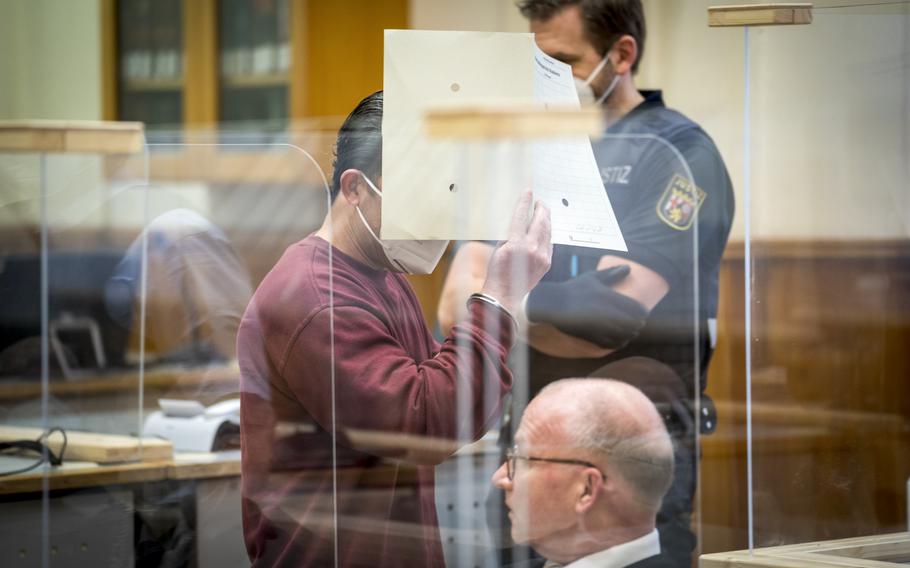 Syrian defendant Eyad Al-Gharib hides his face as he arrives to hear his verdict in a court room in Koblenz, Germany, Wednesday, Feb. 24, 2021. Germany’s top court said Tuesday, May 3, 2022 that it has rejected the appeal of a former members of Syria’s secret police who was convicted last year of facilitating the torture of prisoners in his home country. (Thomas Lohnes/Pool via AP)

BERLIN — Germany's top court said Tuesday that it has rejected the appeal of a former member of Syria's secret police who was convicted last year of facilitating the torture of prisoners in his home country.

In a landmark ruling, a court in the western German city of Koblenz had convicted Eyad Al-Gharib of accessory to crimes against humanity and sentenced him to 4 1/2 years in prison. The verdict, which was the first time that a court outside Syria ruled in a case alleging Syrian government officials committed crimes against humanity, was welcomed by human rights activists and victims of President Bashar Assad's repression.

Al-Gharib, 45, had appealed the sentence, noting that his testimony to German investigators provided significant evidence for the subsequent conviction of a second, more senior Syrian former official.

The Federal Court of Justice said it found no legal errors in the verdict or sentence imposed by the Koblenz court, meaning that ruling cannot now be challenged.