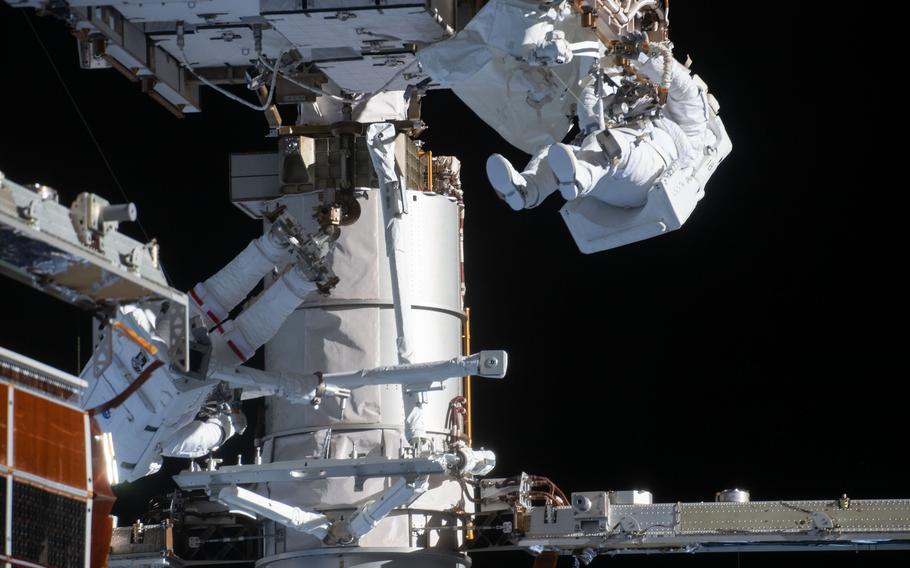 NASA astronauts Kate Rubins, bottom left, and Victor Glover, top right, during a spacewalk to install solar array modification kits on the International Space Station on February 28, 2020. NASA, which plans to operate the station through 2030, has continued to use Russian Soyuz spacecraft to transport astronauts to and from the ISS since retiring shuttles in 2011. (NASA)

(Tribune News Service) — The head of Russia’s space program said Moscow will pull out of the International Space Station, state media reported, a move it has blamed on sanctions imposed over the invasion of Ukraine.

“The decision has been taken already, we’re not obliged to talk about it publicly,” Tass and RIA Novosti reported Roscosmos General Director Dmitry Rogozin as saying in an interview with state TV on Saturday. “I can say this only — in accordance with our obligations, we’ll inform our partners about the end of our work on the ISS with a year’s notice.”

Rogozin earlier this month threatened to end Russia’s mission unless the U.S., European Union and Canada lifted sanctions against enterprises involved in the Russian space industry.

The orbital research space station had until the war remained a rare area of cooperation between Russia and the U.S. and its allies despite steadily worsening relations. But Russia’s unprecedented international isolation since it invaded Ukraine in February has marked the demise of this symbol of joint space exploration.

Three Americans and an Italian astronaut docked at the space station on Wednesday, joining three other Americans, three Russians and a German already on the ISS.

NASA, which plans to operate the space station through 2030, has continued to use Russian Soyuz spacecraft to transport astronauts to and from the ISS since retiring shuttles in 2011. The U.S. space agency is now relying more on private space flights. Elon Musk’s SpaceX launched the four astronauts for NASA and the European Space Agency on Wednesday.