Pentagon: Russia has lost about 25% of its combat power originally used in the Ukraine invasion 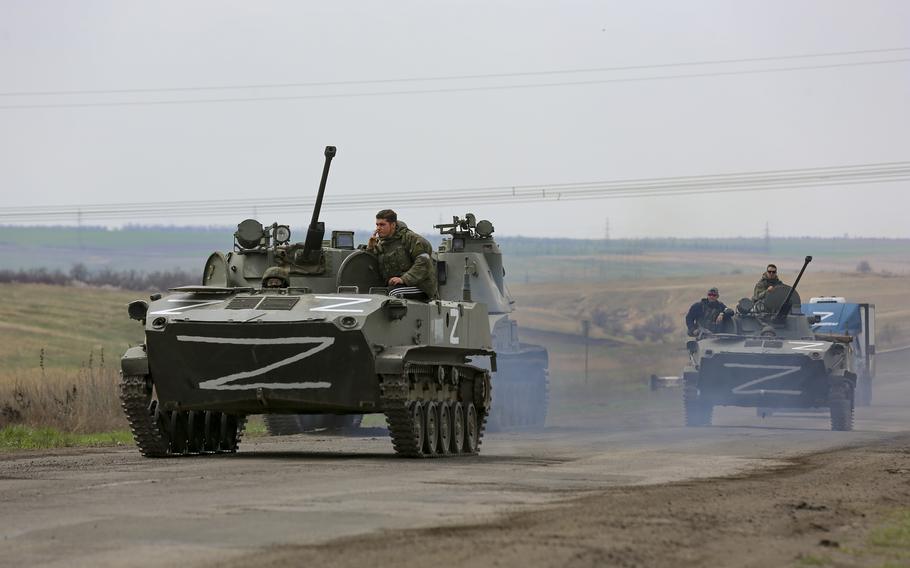 Russian military vehicles move on a highway in an area controlled by Russian-backed separatist forces near Mariupol, Ukraine, Monday, April 18, 2022. Mariupol, a strategic port on the Sea of Azov, has been besieged by Russian troops and forces from self-proclaimed separatist areas in eastern Ukraine for more than six weeks. (Alexei Alexandrov/AP Photo)

WASHINGTON — Russia has lost about one-quarter of its troops, weapons and military equipment originally sent to invade Ukraine less than two months ago, a senior U.S. defense official said Tuesday.

“We believe that [Russian President Vladimir Putin’s] roughly at 75% of his combat power that he had originally when he started,” the official told reporters at the Pentagon. “This is across all functions: it's infantry, its artillery, its aviation – both fixed and rotary – it's ballistic missiles, cruise missiles [etc.]”

Putin spent months amassing more than 170,000 troops and military equipment along Ukraine’s borders with Russia and Belarus before launching the war on Feb. 24, U.S. officials have said.

The official, who spoke on condition of anonymity, declined to further specify the losses, but the Ukraine Defense Ministry on Tuesday said its forces have killed roughly 20,800 Russian troops and destroyed 169 fighter jets, 802 tanks, 2,063 armored personnel vehicles and 132 multiple launch rocket systems.

As of Tuesday, Russia claims to have destroyed “140 [Ukrainian] aircraft, 490 unmanned aerial vehicles, 253 anti-aircraft missile systems, 2,367 tanks and other armored combat vehicles, 256 multiple launch rocket systems and 1,021 field artillery and mortars,” according to a Russian Defense Ministry post on Telegram.

The post came a day after the ministry on the same platform said Ukraine had suffered “irretrievable losses” of 23,367 troops and other fighters in the conflict. The post did not say whether that total included injured personnel or prisoners of war.

“The Russian troops have begun the battle for the Donbas," Zelenskyy said in a taped address. "[A] significant part of the entire Russian army is now concentrated on this offensive."

Pentagon officials have said Russia intends to refocus its efforts on the Donbas region after pulling its ground forces from the Ukraine capital of Kyiv and Chernihiv more than two weeks ago.

The U.S. official on Tuesday said Russia had started “some limited offensive operations” southwest of Donetsk and south of Izyum in eastern Ukraine, but cautioned more Russian operations are expected.

That’s because Russia is also conducting what the official called “shaping operations,” or preparations for a larger assault.

Russia’s preparations could indicate its military is “trying to learn and adapt from some of the mistakes they made earlier in the war, particularly around Kyiv,” where Russian forces were stalled for weeks due in part to food and fuel shortages before retreating.

“They are trying to learn how to fix and overcome those logistics and sustainment challenges,” the official said.

The appointment on April 11 of Col. Gen. Alexander Dvornikov as commander of Russian forces in Ukraine might also indicate an attempt to overcome early challenges in the war, the official said.

“We also see in the appointment of an overall commander as an effort by the Russians to also try to learn from their mistakes with respect to command and control,” the official said.

Still, the U.S. does not believe Ukraine is doomed to fail in Russia’s renewed focus on eastern Ukraine, the official said.

"People speak about this as if it's inevitable that Mariupol's going to fall, that it's inevitable [that] Donbas will be taken by the Russians,” the official said. “We don't see it that way."

The official pointed to Ukraine’s success in defending Kyiv as evidence of their capabilities and noted the U.S. and other nations continue providing Ukraine additional weapons and other military equipment.

"While they're certainly facing a numerically superior Russian force, that doesn't mean they don't have their own advantages and the ability to actively defend themselves,” the official said.

The official did not say how many troops the U.S. estimates Ukraine and Russia have left in the fight.

The U.S. has given Ukraine about $2.5 billion in military aid since the war began, which is more than half of Ukraine’s annual defense budget of $4.2 billion, officials have said.

A second senior U.S. defense official on Tuesday said while multiple countries have also supplied Ukraine with weapons and equipment, the U.S. is “almost certainly” the largest provider of military aid to Ukraine.

The official also said the aid to Ukraine represents an “unprecedented” amount of successive military aid shipments “that we are moving at this speed.”

“I'm not sure I would want to compare this to, say, the Vietnam War or something, but this is certainly the largest recent [U.S.] supply to a partner country in a conflict,” the official said.