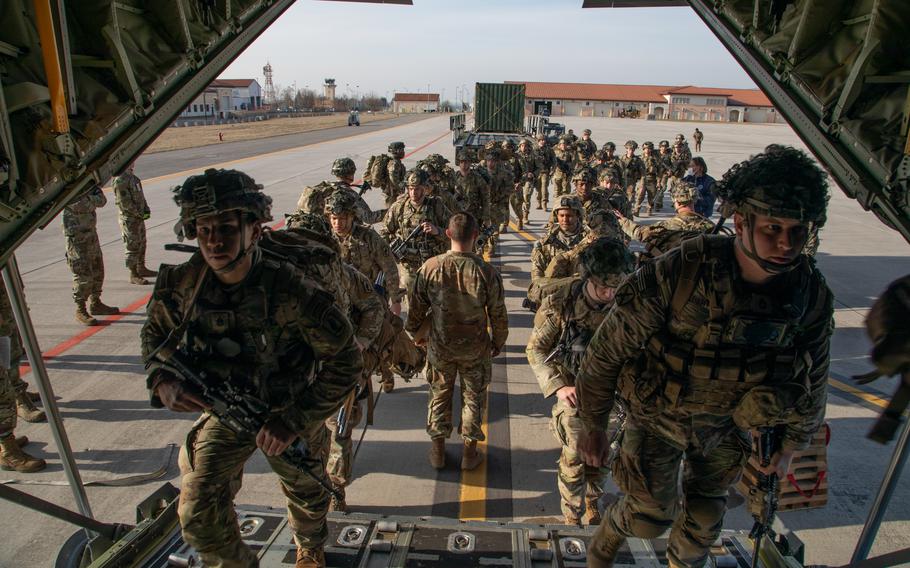 Soldiers of the 173rd Airborne Brigade's 2nd Battalion, 503rd Infantry Regiment board a C-130 plane at Aviano Air Base, Italy, Feb. 24, 2022. Unit members departed for Latvia on Wednesday and Thursday in support of a NATO mission to reassure allies concerned about Russian aggression following the Kremlins invasion of Ukraine. (Meleesa E Gutierrez/U.S. Army)

VICENZA, Italy — Paratroopers from the 173rd Airborne Brigade are deploying to Latvia as part of the NATO response to Russia's invasion of Ukraine.

The 2nd Battalion, 503rd Infantry Regiment began moving into the Baltic country Wednesday on C-130 aircraft out of Aviano Air Base and was expected to have hundreds of troops in place Thursday, said Maj. Cain Claxton, a Vicenza-based Army spokesman.

The troops will link up with Latvian forces, Claxton said. The tiny nation has just one active army brigade.

On Thursday, Russia fired missiles at facilities in or near Ukraine’s largest cities, including the capital of Kyiv. It also sent some of its forces into Ukraine after massing up to 190,000 troops and heavy weaponry along the borders, U.S. officials said.

Claxton said he did not have information available on the exact nature of the paratroopers’ mission, but called the deployment “an opportunity to get out the door and work in another country on behalf of U.S. security interests.” 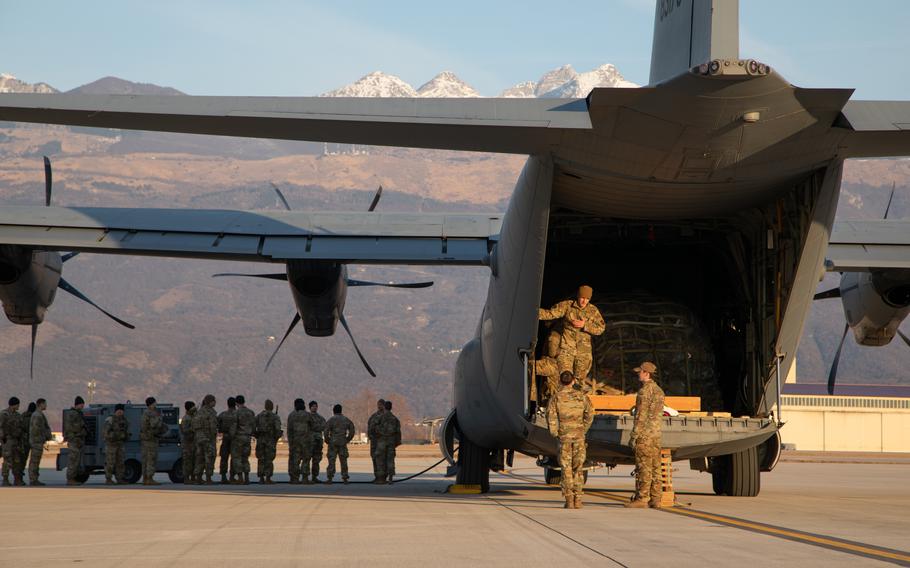 Soldiers wait to board a cargo plane at Aviano Air Base, Italy, Feb. 24, 2022. Soldiers of the 173rd Airborne Brigade's 2nd Battalion, 503rd Infantry Regiment departed Italy for Latvia as part of the NATO response to Russia's invasion of Ukraine. (Meleesa E Gutierrez/U.S. Army)

The brigade, which is the conventional airborne strategic response force for Europe, is “well-prepared to move out at a moment’s notice,” Claxton added.

The deployment is part of a repositioning of Europe-based U.S. forces announced by the Defense Department this week to defend NATO’s eastern flank.

Two B-52 bombers deployed to England, meanwhile, were flying over Sweden and Poland on Thursday afternoon along their usual training routes, according to public aviation tracking websites.

The Baltic states of Estonia, Latvia and Lithuania had increased their calls for permanent U.S. bases in their countries in the run-up to Russia’s invasion of Ukraine.

And on Thursday, all three joined Poland in asking NATO to invoke Article 4 of its founding treaty. Article 4 provides for consultation of all NATO members if any country in the alliance deems its territorial integrity, political independence or security to be under threat.

Russian President Vladimir Putin has repeatedly referred to Russians and Ukrainians as a single people, causing worry in many parts of Eastern Europe that were previously subjugated by the Soviet Union.