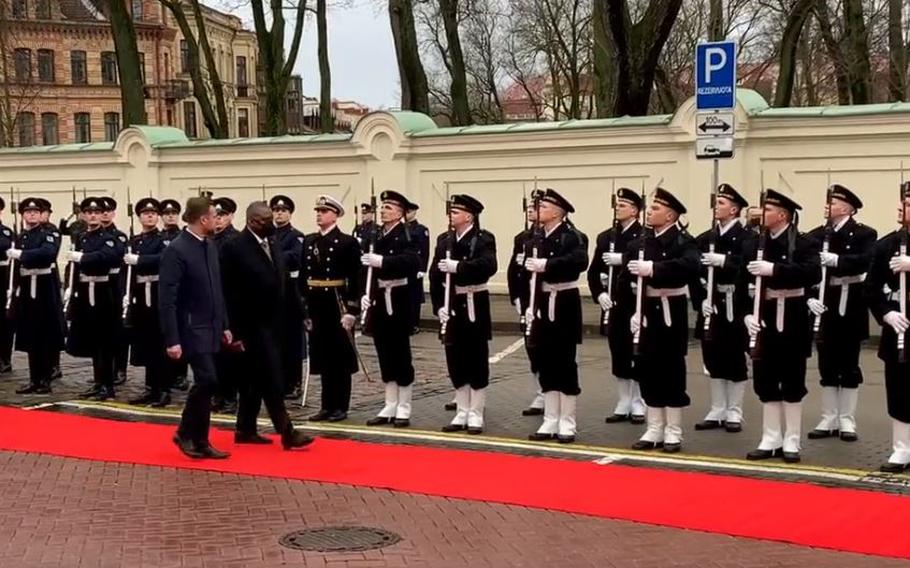 STUTTGART, Germany — Defense Secretary Lloyd Austin said Saturday the U.S. is still examining whether to add forces in the Baltic region, where allies have stepped up calls that NATO send more reinforcements amid fears Moscow will launch a new invasion into Ukraine.

The U.S. already has added additional troops in Poland and Romania to assure allies nervous about potential Russian aggression in the region.

But to date, no new U.S. troops have been sent to the Baltics. Allies in the region are now directly urging top U.S. officials to bring in more troops, ideally on a permanent basis.

Austin, who was in Lithuania for meetings with defense officials from all three Baltic states, said he had no new announcements on whether the U.S. would add new forces.

“There are things we continue to assess,” Austin told reporters in the Lithuanian capital of Vilnius.

The heads of the three Baltic states met Friday with Vice President Kamala Harris in Munich and all delivered the same message: they need more U.S. troops.

“We welcome the decisions already made by the U.S. administration to deploy additional forces in Europe. And we also hope that you increase the presence in the Baltic countries,” Estonian Prime Minister Kaja Kallas told Harris during talks at the Munich Security Conference, where global leaders met over the weekend.

Austin heard the same requests during his visit to Lithuania for defense talks.

“I think we are already at the point where we have to tell the adversary that we are reinforcing the Baltic countries,” said acting defense minister Gabrielius Landsbergis, who noted that after Russia’s initial intervention in 2014 in Ukraine, Baltic states were among the first to be reinforced by allies.

Unable to make new troop commitments during his visit, Austin sought to reassure Lithuanian officials that the U.S. was nonetheless committed to the defense of the Baltic states.

The Baltics are widely regarded by security analysts as an area where NATO is most vulnerable to Russia, given Moscow’s military and geographic advantages.

So far, 4,700 extra troops have been sent to Poland, 300 to Germany and 1,000 have been repositioned from Germany to Romania. A company from the Germany-based U.S. 2nd Cavalry Regiment also is being sent to Bulgaria.

It’s possible the U.S. could be holding off on a Baltic deployment as a contingency move, should Russia follow through and invade Ukraine.

In 2014, U.S. soldiers from the Vicenza, Italy-based 173rd Airborne Brigade were among the forces that flowed into the Baltics in the aftermath of Moscow’s intervention in Ukraine. While U.S.-based 82nd and 101st Airborne units have been sent to Europe to reinforce allies, the 173rd hasn’t received those orders for now.

U.S. Army Europe and Africa on Friday declined to comment on whether troops with the 173rd and additional 2nd Cavalry Regiment elements were on standby to mobilize, but said they each “maintain a high state of readiness.”

“The 173rd Airborne Brigade and the 2nd Cavalry Regiment are always ready to support our allies and partners,” USAREUR-AF said in a statement.