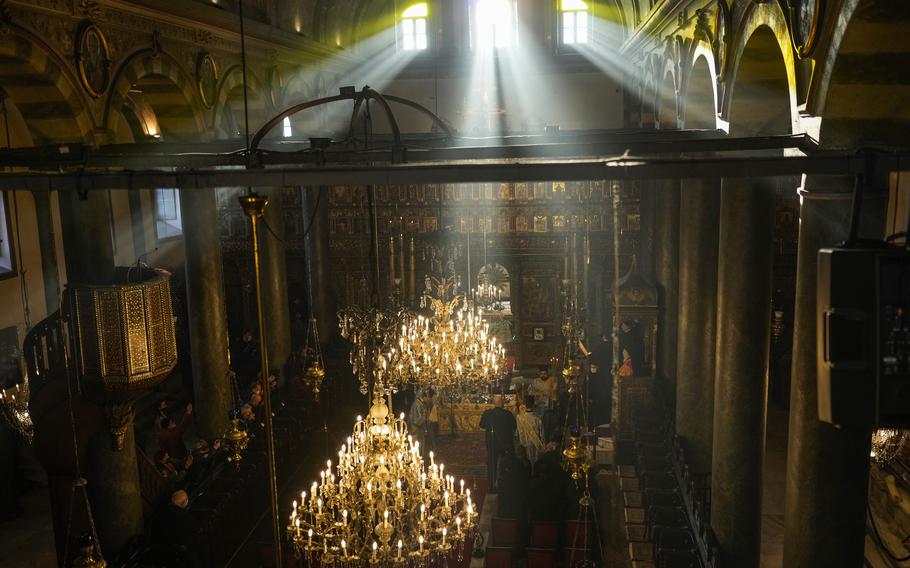 Ecumenical Patriarch Bartholomew I, at right, the spiritual leader of the world’s Orthodox Christians, leads the Epiphany Mass at the Patriarchal Church of St. George in Istanbul, Turkey, Thursday, Jan. 6, 2022. (Francisco Seco/AP)

VATICAN CITY — Christians around the world on Thursday marked Epiphany, known as Three Kings Day for Catholics and the Baptism of Christ for the Orthodox, with a series of celebrations.

Pope Francis used a Mass at St. Peter’s Basilica to decry consumerism, parades were held in Spain the night before, and Orthodox believers watched swimmers plunge into icy waters despite the pandemic to retrieve crosses.

Francis encouraged people to shake off consumeristic “tyranny” and crises of faith in lives and societies and instead find the courage to work for justice and brotherhood in societies dominated by what he called the “sinister logic of power.”

The Catholic feast day of Epiphany recalls the visit of three Magi, or wise men, to the infant Jesus, and their sense of wonder at the encounter.

In his homily, Francis urged people to move past the “barriers of habit, beyond banal consumerism, beyond a drab and dreary faith, beyond the fear of becoming involved and serving others and the common good.”

He said that “we find ourselves living in communities that crave everything, have everything, yet all too often feel nothing but emptiness in their hearts.”

Decrying what he defined as “the tyranny of needs,” Francis said: “Let us not give apathy and resignation the power to drive us into a cheerless and banal existence.”

“Today thoughts go to the brothers and the sisters of the Eastern churches, both Catholic and Orthodox, who tomorrow celebrate the birthday of the Lord,’‘ the pontiff said. 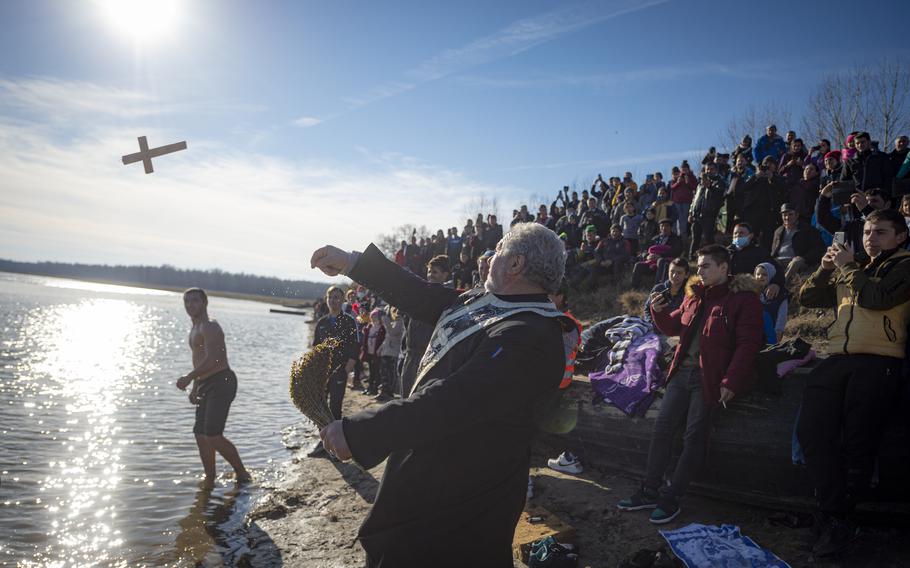 A priest throws a wooden cross in the Danube river during Epiphany celebrations in Facaieni, eastern Romania, Thursday, Jan. 6, 2022. Villagers gather to be blessed with holy water then watch youngsters compete to retrieve the cross from the river. (Alexandru Dobre/AP) 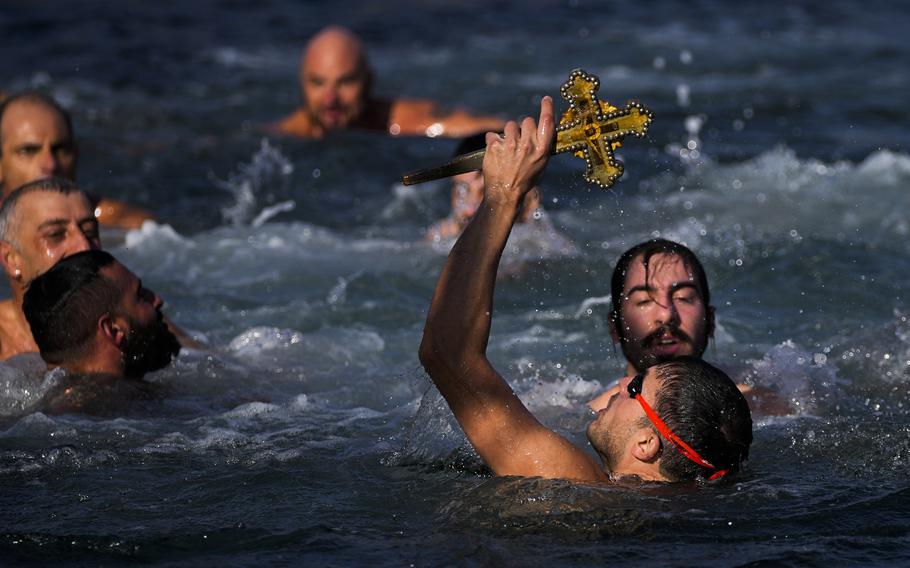 A Greek Orthodox faithful holds up a wooden crucifix after retrieving it in the Golden Horn during the Epiphany ceremony in Istanbul, Turkey, Thursday, Jan. 6, 2022. (Francisco Seco/AP) 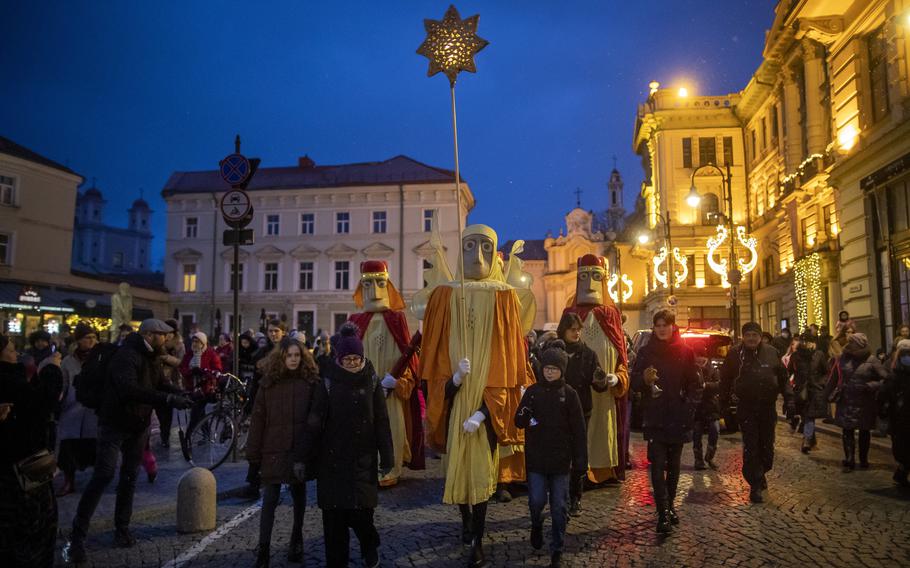 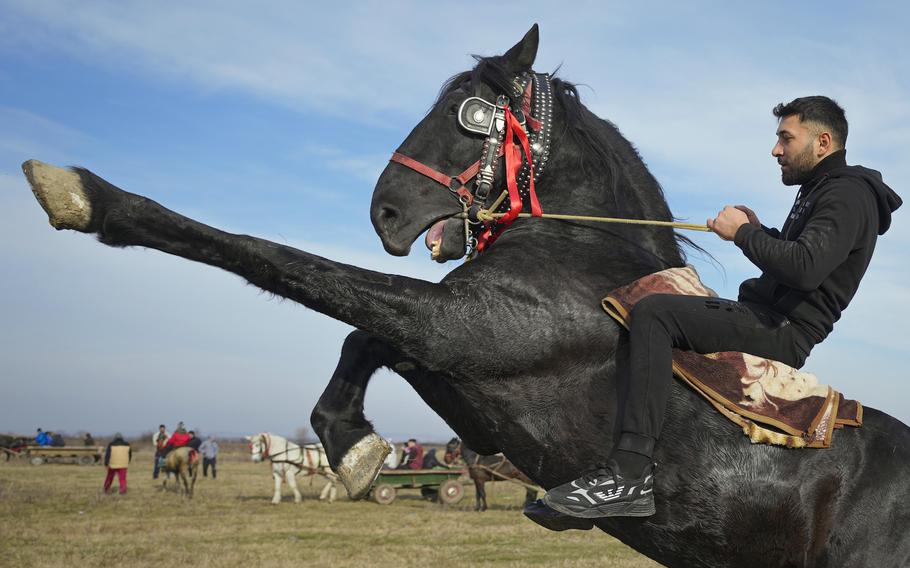 A man shows off riding skills during Epiphany celebrations in the village of Pietrosani, Romania, Thursday, Jan. 6, 2022. According to the local Epiphany traditions, following a religious service, villagers have their horses blessed with holy water then compete in a race. (Vadim Ghirda/AP)

In Istanbul, the spiritual leader of the world’s Orthodox Christians, Ecumenical Patriarch Bartholomew I, held an Epiphany Mass before leading a traditional Blessing of the Waters ceremony during which swimmers competed to retrieve a floating cross thrown into the sea.

Bartholomew, who recently recovered from COVID-19 and underwent heart surgery in November, threw a wooden cross into the Golden Horn, before 10 men jumped into the waterway to retrieve it. Members of Istanbul’s small Greek Orthodox community, wearing masks, looked on.

This year, the cross was recovered by 36-year-old Galip Yavuz, who said it was his fifth attempt at retrieving it.

Bartholomew is considered first among equals among Orthodox patriarchs, although only a few thousand Greeks now live in Turkey. He also directly controls several Greek Orthodox churches around the world, including the Greek Orthodox Archdiocese of America.

His patriarchate in Istanbul dates from the Orthodox Greek Byzantine Empire, which collapsed when the Muslim Ottoman Turks conquered Constantinople, today’s Istanbul, in 1453.

Similar blessing of the waters ceremonies were held in predominantly Orthodox Greece, Cyprus, Bulgaria and Romania, with swimmers competing against each other to grasp a floating cross thrown into seas, rivers or lakes.

Thousands of Orthodox Christian worshippers in Bulgaria neglected restrictions on mass gatherings due to the pandemic and stuck to their centuries-old Epiphany traditions, plunging into icy rivers and lakes.

Celebrations were canceled or scaled back in many parts of Greece as the country struggles with a huge surge in COVID-19 infections driven by the omicron variant.

In Cyprus, spectators where kept off the pier in line with coronavirus restrictions as a couple of dozen hearty souls dived into the chilly waters of Larnaca Bay on the island nation’s southern coast to retrieve the cross thrown by the leader of the Greek Orthodox Church Archbishop Chrysostomos II. Most people watched the traditional blessing of the waters ceremony from nearby vantage points.

In Spain, a military band played the national anthem outside the royal palace in Madrid and King Felipe VI watched a 21-gun salute before reviewing troops on a wintry day. Indoors, in the Throne Room, the monarch handed medals to 16 members of the armed forces, in a ceremony that dates from 1782. Attendance at the event was limited for the second straight year due to pandemic restrictions on gatherings. Royal family, dignitaries and troops all wore face masks.

The country traditionally holds “cabalgata” parades the day before Epiphany in which the “Reyes Magos,” or Three Wise Men, ride on floats through major cities and towns across Spain. Children and adults alike leave their shoes out the night before and receive gifts from the three kings on Jan. 6.