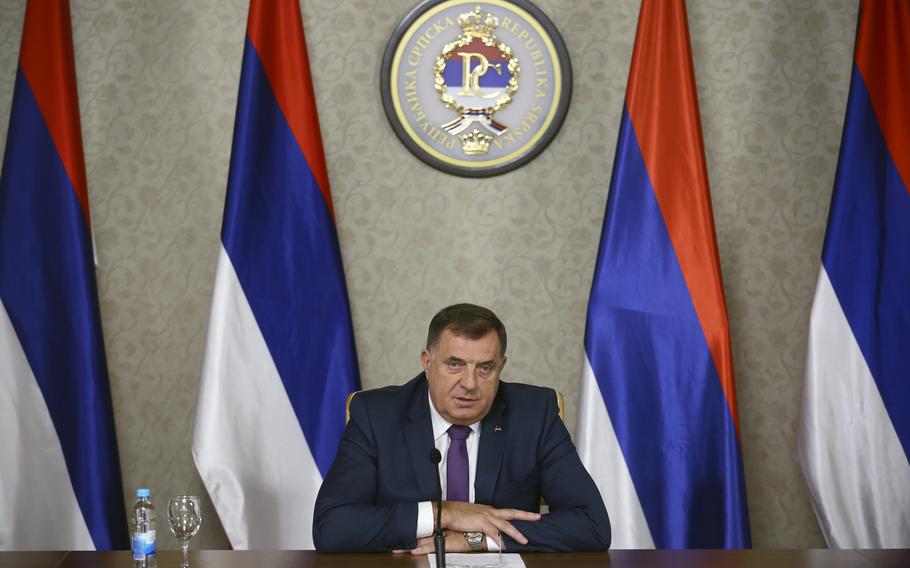 Milorad Dodik, the Bosnian Serb member of the tripartite Presidency of Bosnia, attends a briefing in Sarajevo, Bosnia, on Nov. 8, 2021. The Biden administration on Wednesday, Jan. 5, 2022, announced sanctions against Dodik, accusing him of “corrupt activities” that threaten to destabilize the region and undermine peace accords. (AP)

WASHINGTON — The Biden administration on Wednesday announced sanctions against Bosnian Serb leader Milorad Dodik, accusing him of “corrupt activities” that threaten to destabilize the region and undermine a U.S.-brokered peace accord from more than 25 years ago.

The Treasury Department also alleged that Dodik has used his leadership position to accumulate wealth through graft and bribery, including by providing government contracts and monopolies to business associates.

The practical impact of the Biden administration’s actions is that any property or interest belonging to Dodik in the United States is now blocked and must be reported. Also Wednesday, the State Department accused two current and former senior Bosnia and Herzegovina officials of corruption, preventing them from entering the U.S.

“Together, these designations reaffirm the U.S. commitment to the sovereignty and territorial integrity of BiH, the rule of law and democratic institutions, and a better future for BiH’s citizens,” Secretary of State Antony Blinken said in a statement, using the abbreviation for Bosnia and Herzegovina.

Dodik, a member of Bosnia’s tripartite presidency that also includes a Bosniak and a Croat official, has for years been advocating the separation of the Bosnian Serb semi-autonomous mini-state from Bosnia and having it become part of neighboring Serbia.

That what would be a breach of the Dayton Accords, the 1995 U.S.-sponsored peace agreement that ended Bosnia’s bloody civil war, which killed more than 100,000 people and left millions homeless in the worst carnage in Europe since World War II.

With tacit support from Russia and Serbia, Dodik recently intensified his secessionist campaign, pledging to separate from Bosnia’s loose central authority and form the Bosnian Serb own army, judiciary and tax system.

Bosniak officials have warned that Dodik’s policies could lead to clashes and called on the U.S. and the EU to crack down against him and his associates.

Dodik has repeatedly said he doesn’t care about new sanctions, adding that this would bring Serbs even closer to their “true friends” — Russia and China. He has also denied that withdrawal from the central institutions is contrary to the Dayton peace agreement and would lead to a quick secession or a new war.

Anticipating new sanctions, Dodik said Wednesday he was not worried as he won’t be traveling to the U.S. any time soon.

“These are their sanctions, not ours. They are not the Holy Scripture,” Dodik said. “I do not intend to apply for a visa for America even if my sanctions are lifted tomorrow.”

The U.S. also designated a media outlet, Alternativna Televizija d.o.o. Banja Luka, which it said was owned by a company linked to Dodik’s family. The administration says Dodik acquired the organization to advance his own agenda and exerts behind-the-scenes control over its content, including by mandating approval of politically sensitive stories.

The two other officials designated by the State Department are Milan Tegeltija, the former head of the High Judicial and Prosecutorial Council, which appoints, dismisses and oversees the work of all the country’s judges and prosecutors, and Parliamentary Assembly Representative Mirsad Kukic.