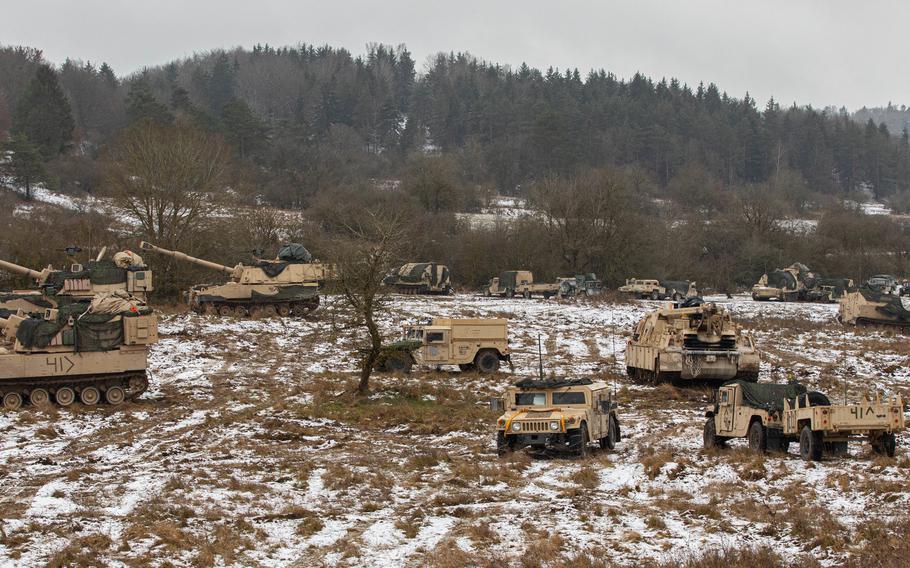 The Combined Resolve XVI training exercise is held at the U.S. Army’s Joint Multinational Readiness Center in Hohenfels, Germany, on Dec. 7, 2021. It included soldiers from Ukraine and several other countries. (Tommie Berry/U.S. Army)

STUTTGART, Germany — The U.S. should expedite delivery of sophisticated weapons to Ukraine and warn Moscow that any new invasion of Ukrainian territory will result in permanent American military bases near Russia’s borders, 24 former senior government officials and experts recommended in a recent open letter.

The statement, which was issued Thursday by the Atlantic Council think tank, calls for a permanent NATO presence in the Black Sea region and the Baltic states of Lithuania, Latvia and Estonia if a Russian military buildup along the border with Ukraine turns into an incursion.

But a new Russian attack on Ukraine should invalidate elements of that act, the experts said in the statement.

“In short, Moscow appears to be setting the stage for launching a major conventional assault on Ukraine, even though the United States and NATO have shown a willingness to sit down and discuss Kremlin concerns,” the statement said.

The statement comes ahead of a meeting Jan. 10 between Washington and Moscow on the crisis in Ukraine. 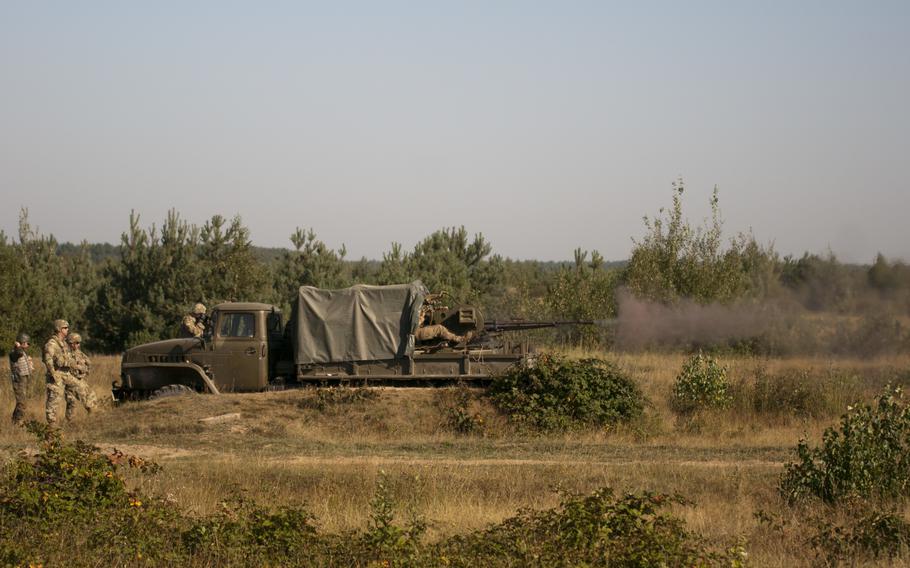 Soldiers with the Ukrainian armys 1st Battalion, 95th Separate Airmobile Brigade fire a ZU-23, a twin-barreled, 23 mm, anti-aircraft gun, during training at the Yavoriv Combat Training Center near Yavoriv, Ukraine, Aug. 31, 2017. A group of defense experts called on the U.S. to expedite the delivery of anti-armor and anti-aircraft missiles to Ukraine, bolstering its defenses against possible Russian aggression. (Eric McDonough/U.S. Army)

In the meantime, the Kremlin has issued various demands to the West, including a pledge that Ukraine will never join NATO. Moscow also wants the alliance to cease troop rotations into the Baltic states.

The call came shortly after Biden’s conversation with Russian President Vladimir Putin about easing tensions on the border with Ukraine, where the Kremlin has reportedly massed about 100,000 troops.

Following Russia’s 2014 annexation of Ukrainian territory, the U.S. and other allies increased military support to the Baltic states and Poland. Those NATO missions thus far have been rotational, although some military experts say they should be made permanent.

Other retaliatory measures that should be taken, according to the statement, include a package of “major and painful sanctions.”

The outline of the sanctions should be communicated to Moscow now “so that the Kremlin has a clear understanding of the magnitude of the economic hit it will face,” the letter stated.

Washington also must persuade Germany to cancel the new Nord Stream 2 gas pipeline in the event of a Russian attack, according to the experts.

Construction of the pipeline was completed, but it has not begun supplying Russian natural gas to Germany because certification is still pending.

The most important step for the West, however, is getting more military hardware into Ukraine, according to the statement.

“For the Kremlin, a large invasion of Ukraine works only if Russian forces are able to seize and hold Ukrainian territory without sustaining significant and constant casualties,” it said. “Western countries should act now to equip Ukraine’s military and territorial defense units with additional capabilities that can impose such costs.”