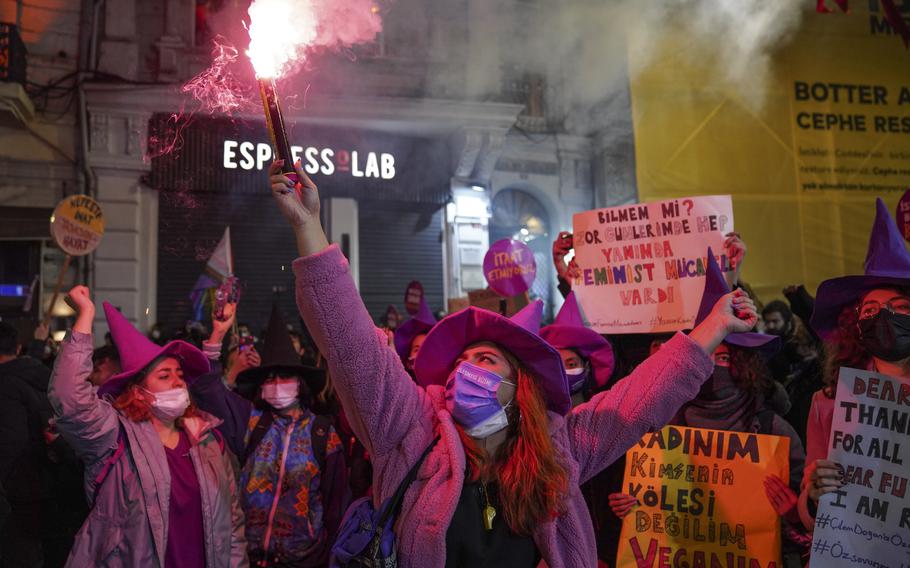 A woman holds up a flare as she marches with others during a protest marking the International Day for the Elimination of Violence against Women in Istanbul, Turkey, Thursday, Nov. 25, 2021. Police on Thursday fired tear gas to break up a protest by women in Istanbul who were marching to press for Turkey’s return to a landmark treaty that aims to protect women from violence. (Kemal Aslan/AP)

ISTANBUL (AP) — Turkish police on Thursday fired tear gas to break up a protest in Istanbul by women demanding the country's return to a landmark international treaty, signed in the same city, that is meant to protect women from violence.

The women marched along Istanbul's main pedestrian street, Istiklal, to mark the Nov. 25 International Day for the Elimination of Violence Against Women. Holding colorful banners, they chanted slogans and vowed not give up on the Council of Europe's Istanbul Convention.

Riot police, who had set up barricades at the end of the street to prevent them from proceeding further, fired tear gas when a group of protesters tried to breach the barriers. At least one protester was injured, the Cumhuriyet newspaper reported.

Similar protests were held in Ankara and other cities.

Turkish President Recep Tayyip Erdogan pulled Turkey out of the Convention with a surprise overnight decree in March, triggering condemnation from women's rights groups and Western countries. A court appeal to prevent the move was rejected and Turkey's withdrawal was formalized in July.

Some officials from Erdogan's Islam-oriented party had called for a review of the agreement, arguing it was inconsistent with Turkey's conservative values.

The government announced its own "Action Plan for Combating Violence against Women," including goals such as reviewing judicial processes, improving protection services and gathering data on violence.

Human rights groups say violence against women is on the rise in Turkey.

The advocacy group, We Will Stop Femicide, says 353 women have been murdered so far in Turkey in 2021, and 409 were killed last year. In October, 18 women were killed by men and 19 others were found dead under suspicious circumstances, according to the group.