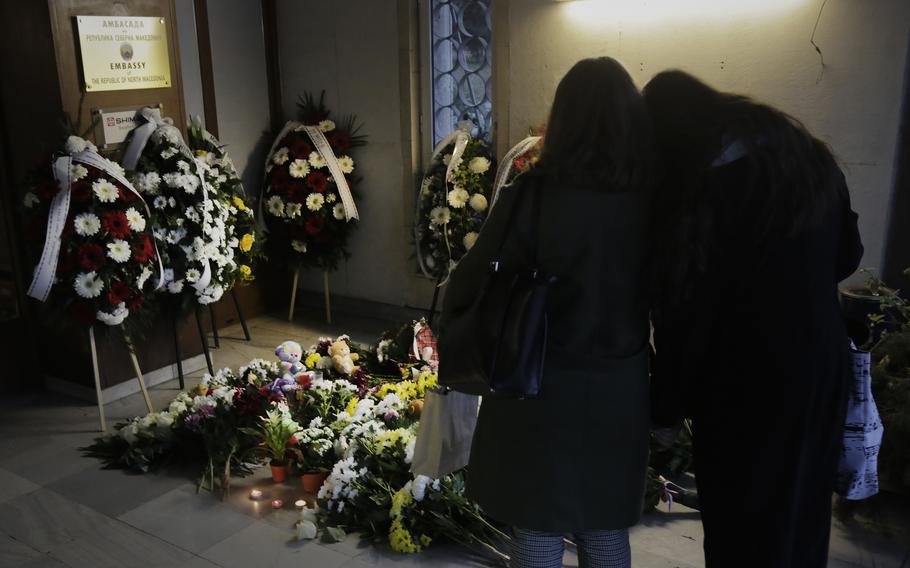 People light candles and lay flowers at the North Macedonian embassy in Sofia, Wednesday, Nov. 24, 2021, as they pay their respects to the victims of a bus crash. Bulgaria and North Macedonia began periods of national mourning on Wednesday, a day after a bus traveling through Bulgaria carrying tourists to neighboring North Macedonia crashed and caught fire, killing 45 people. (Valentina Petrova/AP)

SOFIA, Bulgaria — Human error is believed to be the most likely cause of the fiery bus crash in Bulgaria that killed 44 people, including 12 children, early Tuesday, a Bulgarian official said Thursday.

The bus, which officials said had 52 people on board, mostly nationals of North Macedonia, was one of four returning from a trip to Istanbul. Turkey. It hit a highway guardrail in western Bulgaria, caught fire and was reduced to a charred shell. Officials said the passengers were trapped as both exits were blocked.

An investigation is under way into the cause of the accident, which has sent a shockwave of grief across the neighboring Balkan countries.

On Thursday, Borislav Sarafov, deputy chief prosecutor and head of Bulgaria's national investigation service, ruled out a terrorist act, adding that investigators also established there had been no blast.

Speaking at a press conference in Sofia, Bulgaria's capital, Sarafov said that for the time being "the leading version (of events) is human error."

"The guard rail on the motorway where the accident happened is dangerous and is among the main causes for the crash," he said. He added that investigators are examining whether poor organization of highway traffic such as lane marking, lack of proper signs and reflectors could have contributed to the crash.

Lead investigator Marian Marinov said the bus driver had tried to stop before hitting the guard rail, but instead drove into it, likely because it was dark and raining.

"Witnesses have said that immediately after the first hit fire broke out and the bus was quickly filled with smoke," he said.

"No one could exit from the front door because of the strong fire there. All gathered in front of the second door in the middle of the bus, but it was blocked by the guard rail," he said.

Sarafov said forensic investigators have so far found a total of 44 bodies, one fewer than the 45 officials initially reported. He called the discrepancy a "mystery" and added that investigators were trying to establish whether one passenger had moved to another of the buses or had survived the crash.

Seven people are known to have survived — five citizens of North Macedonia, one Serb and one Belgian. They were taken to Sofia's Pirogov emergency hospital and are in stable condition.

One of them, who broke a window to escape the burning bus, testified to prosecutors that eight people had jumped out, said Siyka Mileva, spokesperson for the chief prosecutor.

Sarafov said Thursday that the victims died of suffocation from fire smoke and not from the impact of the crash. The official added that soot particles were found in their respiratory systems.

Bulgarian Interior Minister Boyko Rashkov told reporters at the crash site Tuesday that he had never "seen something more horrifying." The bodies have to be identified by DNA testing.

Media in Bulgaria and North Macedonia have described it as the deadliest bus crash in both countries' histories.

Authorities in North Macedonia have revoked the license for the travel company that organized the trip and banned its traveling operations. Also, two customs officers were suspended because they allowed the bus involved in the accident to pass the border without a vehicle license.

"What happened was something no one would want — (it's a) big tragedy," Metush Memedi, a teacher from the school said. "We have five children from one family. Two of them were in ninth grade, one in eighth grade, one in sixth, and one girl in second."

Visar Ganiu, mayor of the municipality of Chair in Skopje, said 16 of the crash victims hailed from his district.

"I want to express condolences to the families, friends and colleagues of all those who lost their lives in the tragic accident," Ganiu said. "We are hurting with them as well."