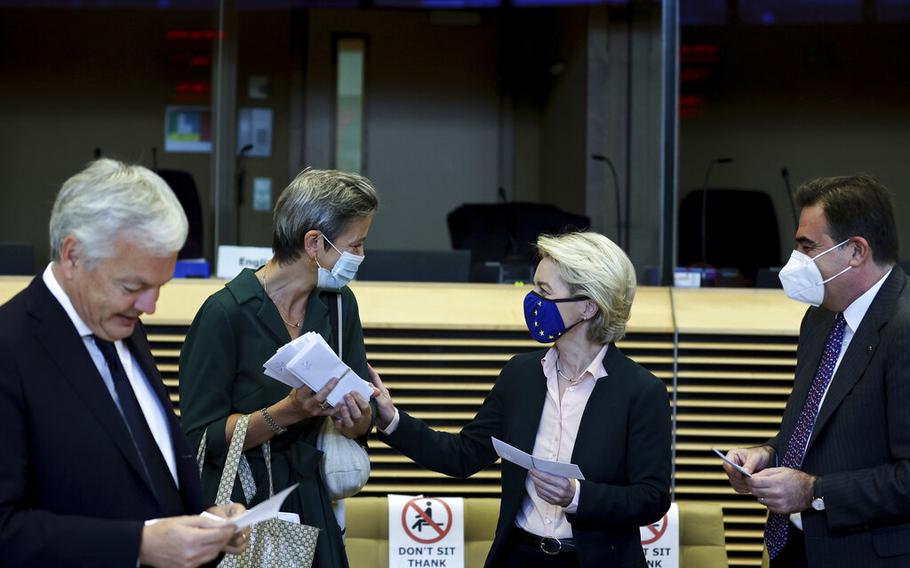 BRUSSELS — The European Union warned member countries Thursday that they risk undermining the 27-nation bloc’s COVID-19 travel and access certificate system with new restrictions that some are putting in place to try to thwart a surge in cases.

At the same time, the EU’s executive branch, the European Commission, recommended that a COVID safe-country list with about 20 countries outside Europe currently on it should be dropped from March and that all travelers with World Health Organization endorsed shots be allowed in.

Anxious to defend the free movement of goods and people so vital to business, EU Justice Commissioner Didier Reynders said there is “an obvious risk that differing approaches between countries could endanger confidence in the COVID certificate system, and harm free movement in the Union.”

The World Health Organization says coronavirus infections jumped 11% in Europe in the last week, the only region in the world where COVID-19 continues to rise. The WHO’s Europe director, Dr. Hans Kluge, warned that without urgent measures, the continent could see another 700,000 deaths by the spring.

Many countries have begun tightening rules on people who are not vaccinated to try to encourage them to get shots to better halt the spread of the virus. Austria even plans to make vaccines obligatory from next February.

As winter closes in and coronavirus restrictions are ramped up, tens of thousands of people have rallied around Europe in recent weeks in protest against the tightening of measures and against the requirement for COVID-19 certificates.

The EU’s COVID pass contains proof that the holder has either been vaccinated, has in the past recovered from the disease, or has recently tested negative.

“Holders of (an) EU certificate should, in principle, not be subject to additional restrictions, wherever they come from in the European Union. Restrictions such as additional tests or quarantine, for instance,” Reynders, the justice commissioner, told reporters.

The commission says scientific evidence shows that vaccine immunity begins to diminish after about 6 months. But it’s recommending that certificates should continue to be accepted as valid for 9 months after the first shot.

Some countries want booster shots to be mandatory for the certificates to be valid. France, for example, wants to require them on certificates for people over 65, while neighboring Belgium does not think it’s necessary yet.

“The commission is not proposing any period of validity for boosters at the moment,” Reynders said.

Brussels also wants to end the EU’s safe-country list for non-essential travel. Like other countries, the United States has been on and off it as the pandemic spread in waves. That is set to change from March 1, if the 27 member countries agree.

“Now we are moving away from this country-based approach to an individual approach,” EU Home Affairs Commissioner Ylva Johansson said. “All people that are vaccinated can come into the European Union.”

Travelers who have had EU-approved vaccines would simply be able to enter, while those with other WHO-endorsed shots would also have to submit a negative PCR test as well. But certificates that these travelers present must not be more than 9 months old.

Frank Jordans in Berlin, and Colleen Barry in Milan, Italy, contributed to this report.