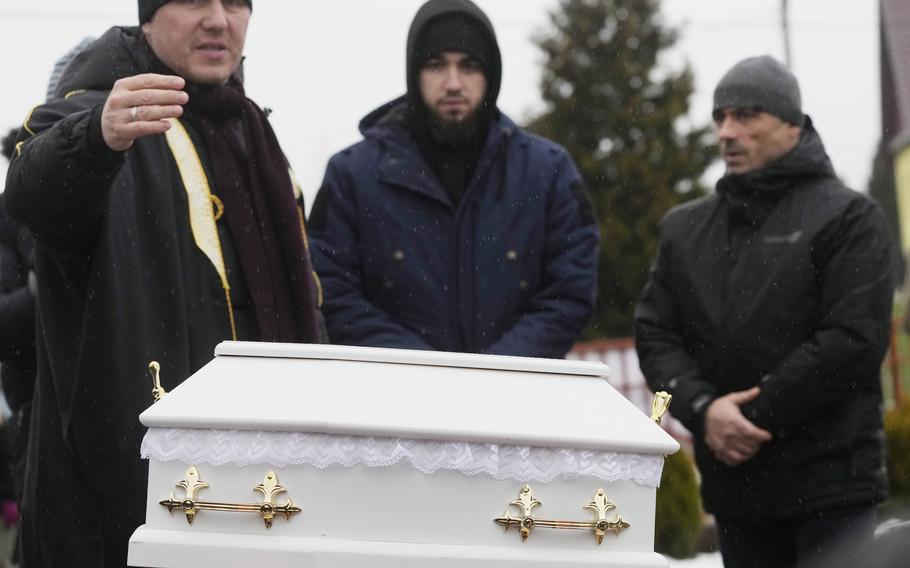 A Polish imam, left, and two other members of a Muslim community bury the tiny white casket of an unborn Iraqi boy, in Bohoniki, Poland, on Tuesday Nov. 23, 2021. The child is the latest life claimed as thousands of migrants from the Middle East have sought to enter the European Union but found their path cut off by a military build-up and fast approaching winter in the forests of Poland and Belarus. (AP Photo/Czarek Sokolowski) (Czarek Sokolowski)

BOHONIKI, Poland — A Polish imam recited prayers Tuesday over the tiny white casket of an unborn Iraqi boy, the latest life claimed as migrants from the Middle East have tried to slip into the European Union illegally and found their path blocked by soldiers in the forests of Poland and Belarus.

After the first snow of the season fell overnight, Aleksander Ali Bazarewicz, the imam, waited in hopes that the child's father — in a refugee center and with his wife hospitalized in serious condition — would arrive. When he didn't appear, Bazarewicz lead the funeral rites in front of an old wooden mosque and later at the graveside.

"Another victim," said Bazarewicz, who led prayers for the first victim of the migration to be buried in the same cemetery, a 19-year-old Syrian refugee, nine days ago.

"We thought this would only happen once but now this sector gets bigger and bigger," he said, standing among four simple burial mounds, each surrounded by stones and covered with pine branches.

All four now rest together on the edge of Poland's largest Muslim cemetery, which belongs to a community of Tatars who have lived in Poland's eastern forests for centuries.

"They will rest among their Tatar brothers," he said.

There is no exact toll among the migrants and refugees who since the summer have traveled to Belarus and then sought to cross into Poland, Lithuania or Latvia, the three countries bordering the EU.

The EU considers the migration "hybrid warfare" waged by the authoritarian government of Belarusian President Alexander Lukashenko. Poland has ordered a state of emergency along its border to stop migrants from coming through, and to keep family — or smugglers — from approaching the border to facilitate their travel further west. Most aim to reach Germany or elsewhere in Western Europe, in some cases to be reunited with relatives.

As Poland has built up its military presence in the area, many migrants have become trapped in the forest, pushed back and forth between Belarusian and Polish forces.

The Polish Border Guard agency has since September reported about 10 deaths, but they don't identify them. Meanwhile, humanitarian groups and Polish media have reported more cases but it's difficult to verify those deaths.

There also have been migrant deaths on the Belarusian side, with bodies returned to Iraq for burial, but the Minsk authorities haven't reported how many.

A man who appeared to be a migrant from Africa was buried Monday in the Catholic cemetery of Sokolka, not far from the Muslim cemetery in Bohoniki, because a Bible was found next to his body. But since there was no certainty that he was Christian, the local priest didn't preside and all those attending the burial were journalists.

Polish media have also reported the death of a 24-year-old Syrian Christian man whom they identified as Issa Jerjos.

Bazarewicz led the rites for a family he had never met, admitting he knew little more than the mother miscarried in her 27th week of pregnancy and that the family had five children. He called in two Muslims, both Chechen immigrants, to assist with the funeral, attended otherwise only by about three dozen journalists.

Bazarewicz says it's his duty as a Muslim to ensure that other Muslims who have perished on Polish soil far from their homelands be buried with the proper religious rites. In Islam, a fetus after four months is considered a human being and buried as one, he explained.

The lace-trimmed casket of the unborn infant — given the name Halikari Dhaker and whose date of death is Nov. 14 — was so small it was carried to the grave by a single man before it was lowered with ropes.

"These people have left their countries, not to travel around or see beautiful places, though Poland is beautiful, but to find a better life," he said. "They were manipulated and they've suffered — which is not their fault."