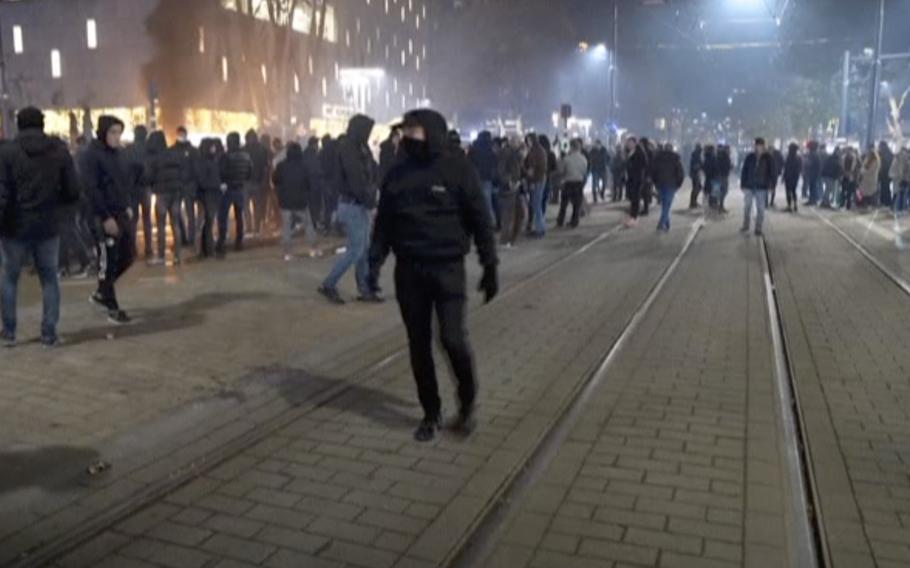 In this image taken from video, demonstrators protest against government restrictions due to the coronavirus pandemic, Friday, Nov. 19, 2021, in Rotterdam, Netherlands. (Media TV Rotterdam via AP)

THE HAGUE, Netherlands — In the face of demonstrations across much of Europe protesting tough COVID-19 measures over the past days, authorities on Monday pleaded for patience, calm and a willingness to get a vaccine shot in the arm as infections spike upward again.

And for those who abused the protests to foment violence, Dutch Prime Minister Mark Rutte just called them "idiots."

Protest marches from Zagreb to Rome and from Vienna to Brussels and Rotterdam, bringing tens of thousands out, all had one message from a coronavirus-weary crowd — we've had enough!

"Not able to work where you want work, to be where you want to be. That's not what we stand for, that's not freedom," said Eveline Denayer, who was at Sunday's march in Brussels, which drew a crowd of over 35,000.

"We live in Western Europe and we just want to be free, how we were before," she said.

Government leaders and European Union officials all made clear on Monday that a return to bygone days was still out of the question and that the violence at some of the marches was counterproductive.

Much of the discontent however is targeted at politicians who had promised that vaccinations would bring freedom. With the delta variant making sure contagion remains rampant, EU governments are being forced to reimpose constraints and — in some countries — slap tougher restrictions on the non-vaccinated.

"The rising numbers are unfortunately fueling vaccine hesitancy, and we all need to take a firm stand against this," said EU Health Commissioner Stella Kyriakides. However, she said the spike is mainly to blame on those who refuse to have a shot.

"But now we are facing a pandemic mainly driven by the unvaccinated," Kyriakides said.

Breakthrough infections and deaths among the vaccinated happen, though at far lower rates, according to officials.

Rutte condemned rioters in Rotterdam and across the Netherlands after coronavirus protests there and in Brussels descended into violence amid simmering anger at lockdown measures being put into place in an attempt to rein in soaring rates of infection.

"I realize that there are a lot of tensions in society because we have been dealing with all the misery of coronavirus for so long," Rutte said. But he stressed the rioters were something completely different, producing "a pure explosion of violence directed against our police, against our firefighters, against ambulance drivers."

Scenes were ugly too at the end of the Brussels protest march, with rioters pelting police, who then used tear gas and water cannons to break up the crowds.

"Our goal today is to fight against the virus. Please, let us not get incited by a small group which would turn it into a fight against one another," Belgian Prime Minister Alexander De Croo said.

The protests come as a fourth wave of infections is locking down Austrians and forcing renewed restraints in many European nations on anything from working in the office to drinking at bars.

The Dutch violence came a week into a new partial lockdown in the Netherlands and after an announcement that the government was banning fireworks on New Year's Eve in an effort to ease the strain on hospital emergency rooms. In riots across the country, youths threw fireworks at police officers.

The EU pointed out that scientific evidence shows that increased vaccinations would contain the crisis and avoid more deaths.