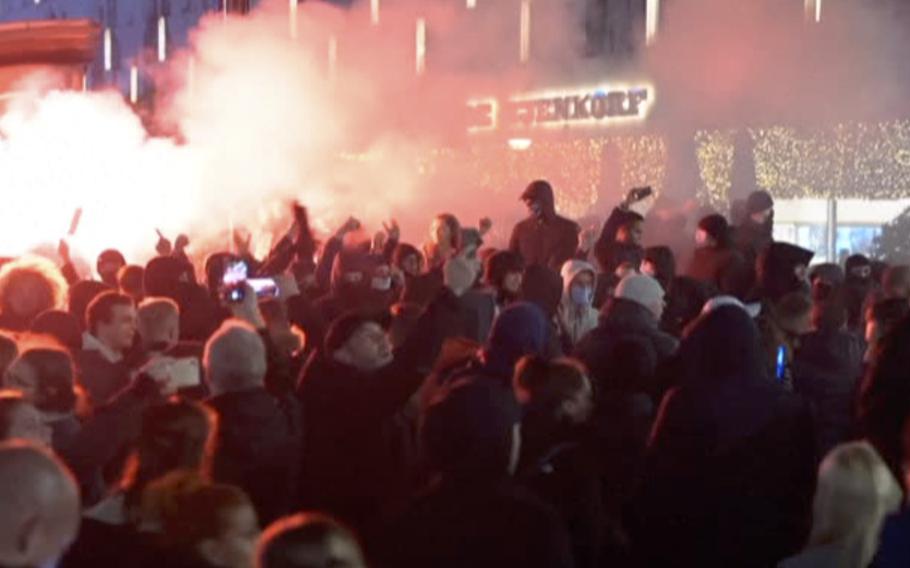 In this image taken from video, demonstrators protest against government restrictions due to the coronavirus pandemic, Friday, Nov. 19, 2021, in Rotterdam, Netherlands. (Media TV Rotterdam via AP)

The violence by groups of youths in The Hague and elsewhere Saturday night wasn't as serious as Friday night in Rotterdam, where police opened fire on rampaging rioters and arrested 51 people.

Police said Sunday that they arrested 19 people in The Hague and used a water cannon to extinguish a fire on a street.

Two soccer matches in the country's top professional league were briefly halted when fans — banned from matches under a partial lockdown in force in the Netherlands for a week — broke into stadiums in the towns of Alkmaar and Almelo.

In The Hague, police said five officers were injured as they tried to break up unrest by a group of youths who set at least two fires on streets and threw fireworks. Police said in a tweet that one rioter threw a rock at an ambulance carrying a patient to a hospital.

In the southern towns of Roermond and Stein, police said they arrested a total of 13 people for setting fires and throwing fireworks, and in the fishing village of Urk police arrested eight people for public order offenses, Dutch broadcaster NOS reported.

Tens of thousands of protesters also took to the streets of Vienna on Saturday after the Austrian government announced a nationwide lockdown beginning Monday to contain skyrocketing coronavirus infections.

There were also demonstrations in Italy, Switzerland, Croatia and Northern Ireland.

Police in Rotterdam said that three rioters were hit by bullets and investigations were underway to establish if they were shot by police on Friday night. The condition of the injured rioters wasn't disclosed.

Officers in Rotterdam arrested 51 people, about half of them minors, police said Saturday afternoon. One police officer was hospitalized with a leg injury sustained in the rioting, another was treated by ambulance staff and "countless" others suffered minor injuries.