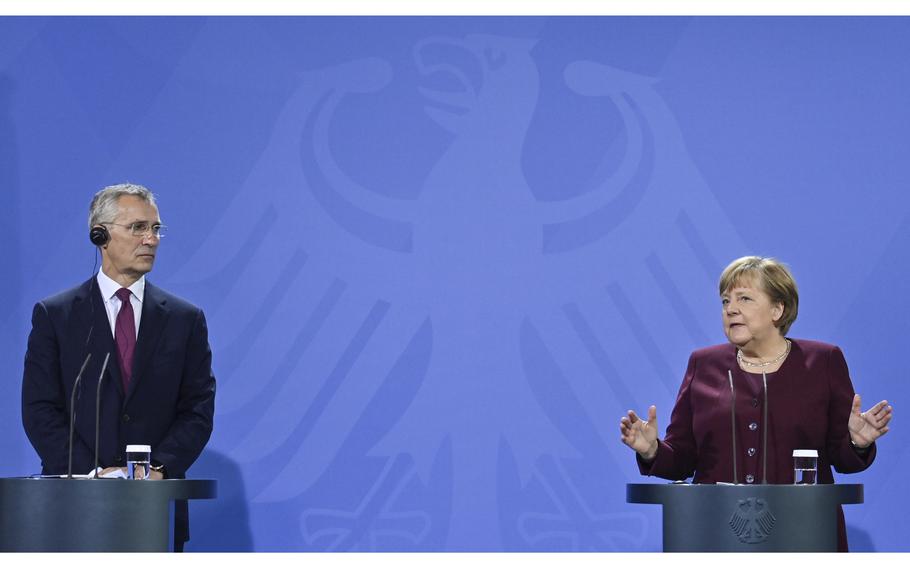 BERLIN — NATO Secretary-General Jens Stoltenberg said Friday that the alliance is closely monitoring an unusual concentration of Russian forces on the border with Ukraine, warning that similar troops were used by Moscow in the past to intervene in neighboring countries.

Speaking at a defense seminar in Berlin, Stoltenberg said NATO had seen a significant military buildup by Russia close to the borders of Ukraine lately.

"We are now closely monitoring the developments along the borders," he said. "This matters for NATO and we have the capacity, we have the capabilities to collect information, to monitor it closely and to understand what is going on there."

Stoltenberg said that the alliance had made clear to Russia that "we see their significant military buildup."

"We see an unusual concentration of forces and we know that they have used these type of forces before to actually intervene and invade other countries, Georgia and Ukraine," he added.

Moscow provided military support to separatists in the breakaway Georgian region of South Ossetia in 2008.

Russia also annexed Ukraine's Crimean Peninsula in 2014 and has supported a separatist insurgency that broke out that year in eastern Ukraine and still controls territory there.

"We call on Russia to be transparent and to prevent an escalation and to help and to reduce the tensions along the borders with Ukraine," Stoltenberg said.

The NATO chief also spoke about the challenge posed by China due to its rising economic and military might.

"The aim of China is to have the most advanced and strongest military capabilities within a few decades," he said. "And they invest: What they do now on nuclear is really big. They are building many new silos for missiles, and they're investing in extremely advanced technologies."

"China is coming closer to us: in space, in cyberspace," Stoltenberg said.

"We see them in Africa. We see them in the Arctic. We see them trying to control critical infrastructure," he added, noting the recent debates in some NATO countries over Chinese companies' involvement in building 5G mobile networks.